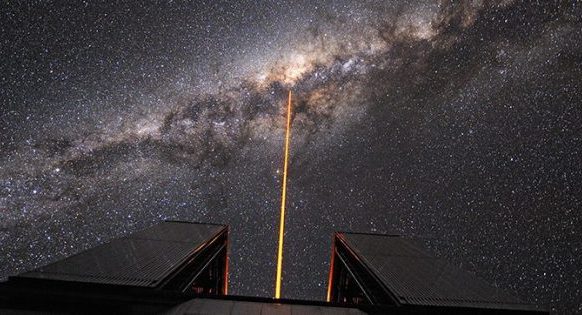 by Markab Algedi; The Mind Unleashed

Chinese scientists are reportedly at work constructing a mega-laser that is so powerful, it could literally tear apart empty space. How can a laser tear apart the absence of matter?

Physicists hailing out of Shanghai, China are building what they refer to as a “Station of Extreme Light,” a device that they claim could be fully functional as early as 2023, about 5 years from now. The Station of Extreme Light appears to be a CERN-level project that could create temperature extremes not typically found on planet Earth. They say the technology it utilizes could one day be used to conduct a particle accelerator similiar to CERN.

Their stated goal is to create a laser so incredibly powerful, it can generate 100-petawatt laser pulses. That is actually 100 million billion watts. For some context, that is 10,000 times the power of the entire Earth’s electrical grids combined. What could even power such a thing?

These incomprehensibly powerful blasts of laser could be pointed at obscenely precise spots measuring a mere three micrometers across. That is approximately two thousand times less than the standard pencil thickness. What would the purpose of this laser be?

According to the Science Mag journal which reports the discovery, the laser would be so powerful it could “rip apart empty space.” How can the absence of matter be ripped open? That’s a mind pretzel.

Ripping empty space would apparently happen via achieving a thing known as “breaking the vacuum,” in which electrons are ripped away from their antimatter counterparts known as positrons, in space’s empty vacuum.

It is currently possible to convert matter into massive amounts of light and heat, as nuclear weapons aptly demonstrate. These scientists want to reverse that process and almost create energy out of nothing. Chinese physicist Ruxin Li is claiming his laser can do it.

“That would be very exciting. It would mean you could generate something from nothing,” he said.

Some details about the laser were given in a Science Mag publication:

“Inside a cramped laboratory in Shanghai, China, physicist Ruxin Li and colleagues are breaking records with the most powerful pulses of light the world has ever seen. At the heart of their laser, called the Shanghai Superintense Ultrafast Laser Facility (SULF), is a single cylinder of titanium-doped sapphire about the width of a Frisbee. After kindling light in the crystal and shunting it through a system of lenses and mirrors, the SULF distills it into pulses of mind-boggling power.

In 2016, it achieved an unprecedented 5.3 million billion watts, or petawatts (PW). The lights in Shanghai do not dim each time the laser fires, however. Although the pulses are extraordinarily powerful, they are also infinitesimally brief, lasting less than a trillionth of a second. The researchers are now upgrading their laser and hope to beat their own record by the end of this year with a 10-PW shot, which would pack more than 1000 times the power of all the world’s electrical grids combined.”
The research team already managed to create a less powerful version of the laser known as the Shanghai Superintense Ultrafast Laser, which can produce a still formidable 5.3 petawatt pulse.

If this laser ends up functioning, it could provide scientists with another way to accelerate particles, performing research in the vein of CERN.