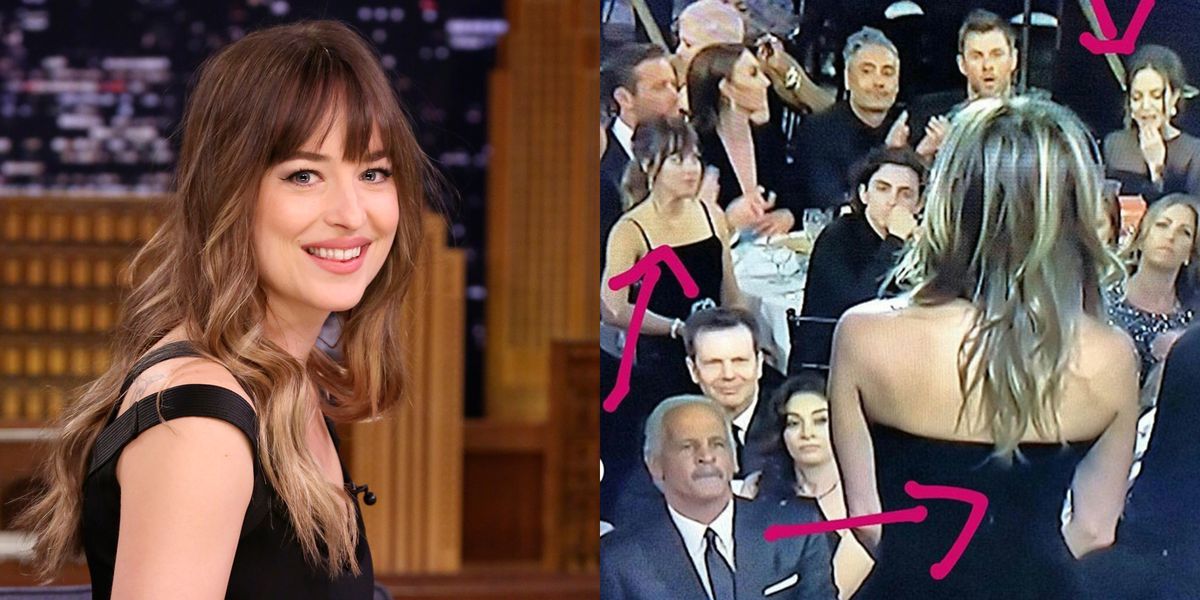 A photo of Dakota Johnson seeming to sneak a look at Angelina Jolie while Jennifer Anniston presented at the Golden Globes circulated the internet after the ceremony. And sure, Johnson confirmed with a laugh to Jimmy Fallon when he asked last night, she won’t deny that was what she was doing. “But so is Armie’s [Hammer] wife. I’m not the only one. Elizabeth [Chambers] is like very blatantly looking at her,” Johnson pointed out on the pic. “She’s like, ‘What is she going to do?’ And I was trying to be sly about it.”

And that exact photo may not actually be her looking at Angie, Johnson continued. “Truthfully, I don’t think that I was really actually looking at her ‘cause if you look really closely at the angle of my eyes, they’re kind of like,” she motioned diagonally out, “over here.”

Johnson trying to cover her tracks.YouTube

“What were you looking at?” Fallon asked.

“Well, there was the actual kids table, which was the Stranger Things table,” Johnson said. “And I really love Stranger Things so much, like so much, so I tried to send my friend a—which is like the thing that I hate the most, when people are in restaurants or whatever, when they try to take a sneaky picture of you like this—so I did that at the Golden Globes in front of—like, everyone there is a famous person. But I was trying to take a video of these kids. Like they’re children, I know, and I was like zooming in but then I also accidentally caught maybe Ridley Scott asleep. But then I think maybe he was just looking at his phone. But it looked like he was asleep.” Johnson wasn’t lying because Fallon had the footage, which he played.

Johnson could barely keep it together during her entire interview though—from the story of her dog getting sprayed by a skunk at the start to the Golden Globes incident. It’s great: