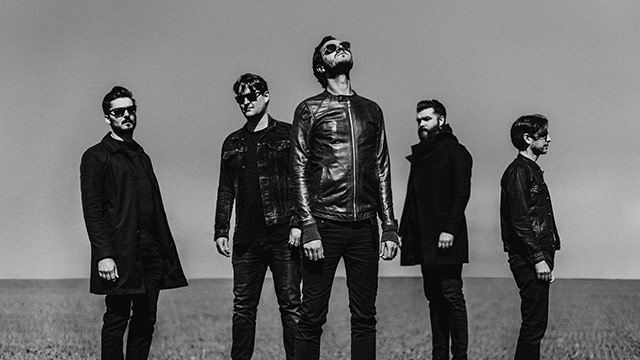 Six albums in, Birmingham’s Editors has been through changes both musically and in terms of personnel, but with its new record, Violence, frontman Tom Smith thinks the band’s confidence levels are exactly where they need to be to push its sound to its extremes. Violence finds the band toying with the most abrasive sounds in its catalog so far while embracing some of the pop sensibility it had shied away from on its recent albums. In his four-and-a-half-star review, editor Matt Collar praised the “dynamic studio sheen” that heightens the album’s impact, resulting in a collection of tracks “rife with grand, operatic gestures.”Smith shared insight about the album’s creation, including the time the band had to pull back from going too far with its heaviness, why they revisited their song from the 2010 Twilight: New Moon soundtrack, and the origins of the album’s stark title and artwork.

AllMusic: If you took this record back in time and played it for your 2005 self, what would he think?

AllMusic: How much of “Hallelujah” was in place when it was brought to the band?

Smith: What I brought to the room with that song was the way that the drum machine worked with the acoustic guitar in the verse, that had an energy that felt exciting. It’s not easy to make them work in harmony successfully, and it felt like I was doing something with that. I brought that to the room with the rest of the band and it started to grow, with Elliot [Williams] bringing these arpeggios, and then when Justin [Jockey] came up with that guitar riff, we started buzzing. It was a real moment in the making of the record. We like drama in our music, we always have done, and that felt like our most over the top. A lot of the guitars on our first few records, they have lots of melody, played high up, and this is from a different place. Justin is a very different guitarist to Chris [Urbanowicz, who left the band in 2012]. He plays differently, and we didn’t get him because we wanted to do the same things, so it was nice to have his personality stamped on the song straight away and to be such a significant moment for the album.

AllMusic: When you push the limits like that, do you ever find that you’ve gone too far for comfort?

Smith: There were a few moments when we got towards mix territory with that song, the way it explodes out of the speakers was overdriven even more, and it went to a place that I wasn’t comfortable with, it was too over the top. If you talk about being heavy, you’re still making melodies for it to work for us, it can’t just be noise, so we had to dial that back a bit. Musically, we’ve never had that much of a rock moment, like with devil signs. We played that song at some festivals last summer, and it isn’t always advisable to play new songs at festivals, but it felt like when people were hearing that song for the first time, they got it, and we thought that maybe we were onto something with this.

AllMusic: There’s also a boldness and directness with the album title and cover art.

Smith: Making the last record, In Dream, we made that all on our own, with no outside involvement. We hid ourselves away on the west coast of Scotland, and that was a very important thing in the development of this band, this stage two of Editors, to put ourselves into that environment and to produce it ourselves. It felt like we’d done something together, that it was going to be OK, we’d come through a rocky time and now we could do this. There’s a pop writing sensibility to some of these songs that over the years we’d pushed to one side and been a bit afraid of. But we’ve been doing this for a while now, it’s our sixth album, and with that breeds confidence, so you can be striking if you want. If you feel the songs have that quality to them, then why not have a striking image as your front cover that you feel goes somewhere to represent what you’ve done, and why not call your album Violence if you think it’s important for this set of songs?

AllMusic: “No Sound But the Wind” has been kicking around in different versions over the years, what keeps you coming back to that song?

Smith: It’s always annoyed me how we could never record that song as a band, the version that was in [Twilight: New Moon] was a cheap home demo that I recorded with one microphone, and I was astonished that they wanted to use that version of it. Then the version that I played onstage had a life in Belgium and became significant there, and just the fact that we’d never recorded it properly was starting to piss me off a bit, that the song had a life but it hadn’t had its defining moment. It’s an odd relationship to have with a song, it doesn’t normally go that way.

On this record, a lot of the songs are quite immediate, in your face, brash, they have a sonic brutality, and we felt that the album needed a moment of reflection, a moment of calm, to have somewhere to breathe. I talked to the band about the idea of trying to record this song again, and there were a few confused looks, a few nods of understanding, and it came down to finding a way to present it that we all had an involvement in, that we were all into, and why not? It was nice to draw a line underneath that song and finally give it a full stop and put it to bed.

AllMusic: Do you think your lyrics have matured in a significant way since the early days?

Smith: When I’m confronted with or look back at things I’ve written lyrically in the past, from the very early records, I’m not embarrassed, but I can see that they are lyrics written by a younger man. Like all songwriters, the concern is that the tap dripping above your head, where the words come from, is going to get turned off, and when it gets turned off, what the fuck am I going to do? So I’m always thankful that when things start to come, I’m like, “OK, there are things I can say here.”

Whether it sounds like the words of a grown man…I don’t feel like a grown man, I joined a band so I wouldn’t have to feel like a grown man for as long as possible, I feel like being in a band is an extension of that longing for eternal youth. Look at the Rolling Stones, trying to be young for as long as you can to avoid those grown man issues that confront everybody else. It felt like the songs acknowledged the times we’re living in and the world we’re confronted with, the violence in our world, in society, the way that’s in our lives and the way it consumes us. That’s present in these songs, and agree that that’s more of a grown man thing to confront than a lot of other things.

AllMusic: This is probably the first time I heard the word “mollycoddled” put to music.

Smith: When I sat at the piano to figure that song out, and when that word came to me, I had a big smile on my face, because I’d never heard it in a song before. I’d fucking love it if that was the case, but I can’t imagine that it is. I’m always striving to find words and images that spark things off, that are strong and striking images, I find that they’re almost more important sometimes than if the song is about anything in particular, it can be a hint of what a song can be about. But my songs aren’t message songs, they don’t have beginning, middle and end, I’m not a storyteller. I’m trying to spark off things on an emotional level, things that aren’t always easy to describe or explain. So when those words come to me, I feel like, “Ah, that’s a nice moment,” and when “mollycoddled” came out, I wanted to actually call the song that, but the band wouldn’t let me, so it’s called “Cold.”

AllMusic: Is there a particular recording session you wish you could have witnessed?