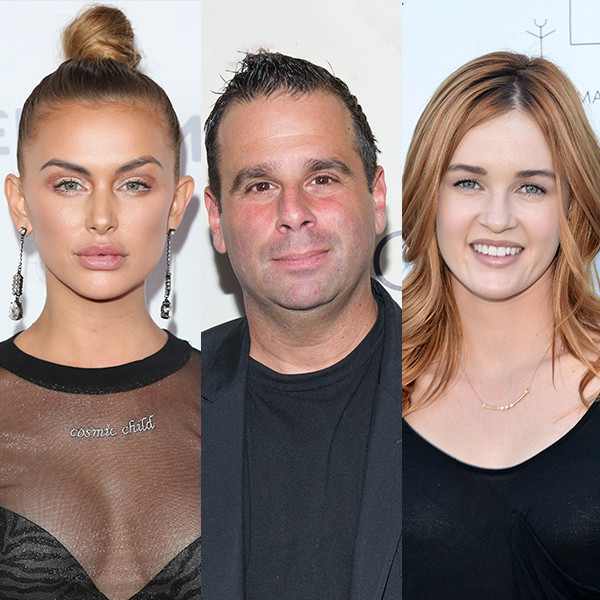 The two were married in 2009, but separated in 2015 and then again in 2016. They filed for divorce in January of 2017. The divorce was finalized earlier this month on Dec. 22, just a few weeks after Emmett and Kent were spotted kissing at a FabFitFun event in Beverly Hills Dec. 7.

As for his relationship with the Vanderpump Rules, the new flames appeared to have tried (and failed) to keep their relationship under wraps until the ink was sealed on the 46-year-old’s divorce to the 29-year-old.

On the show, the Bravolebrity repeatedly denied her mystery man was married and bankrolling her lavish lifestyle. After Katie Maloney, Jax Taylor and others questioned her relationship, Kent quit her hostessing job at Lisa Vanderpump‘s Sur—and with it, the hit show—midway through Season 5.

“I think just the negativity finally got to me. I’m not good at separating real life from work, so it started trickling into my everyday relationships with people who have nothing to do with the show,” Kent told E! News a year ago. “Once that started happening, that was not OK anymore.”

Kent came crawling back three episodes into Season 6 (airing Mondays at 9 p.m. on Bravo), admitting that Emmett had, in fact, paid for her Range Rover—something she couldn’t afford on a hostess’ salary. But, as she explained to Vanderpump, “My man is not an ATM machine.”

Though several cast members would often mention Emmett’s first name in interviews and on social media, Kent continued to protect him. During the Season 5 reunion, which aired in the spring of 2017, moderator Andy Cohen asked her point blank, “Are you dating a married man?”

“We’ve all put our lives out there and you don’t get to come in and just lie about everything,” Stassi Schroeder argued. Kent fired back, “I also don’t have the right to speak about someone else’s life on national television when they did not sign up for this—and I am leaving it at that.”

After Schroeder asked if she was keeping Emmett’s identity a secret because he’s “married,” Kent yelled, “Enough, OK? It’s done! Stop being a bully! Leave it alone! It is not your business! Knock it off! Stop being a mean girl! Do not f–k with my relationship, bitch! Fall the f–k back!”

As soon as the relationship was out in the open, E! News reached out to Kent and Emmett’s reps. Kent mentioned her boyfriend’s full name for the first time publicly in an Instagram Live Story on Dec.19. While partying with James Kennedy, Ariana Madix, Tom Sandoval and co. in Las Vegas, the Bravolebrity asked someone off-camera, “What does Randall Emmett mean to you?”

(E! and Bravo are both members of the NBCUniversal family.)