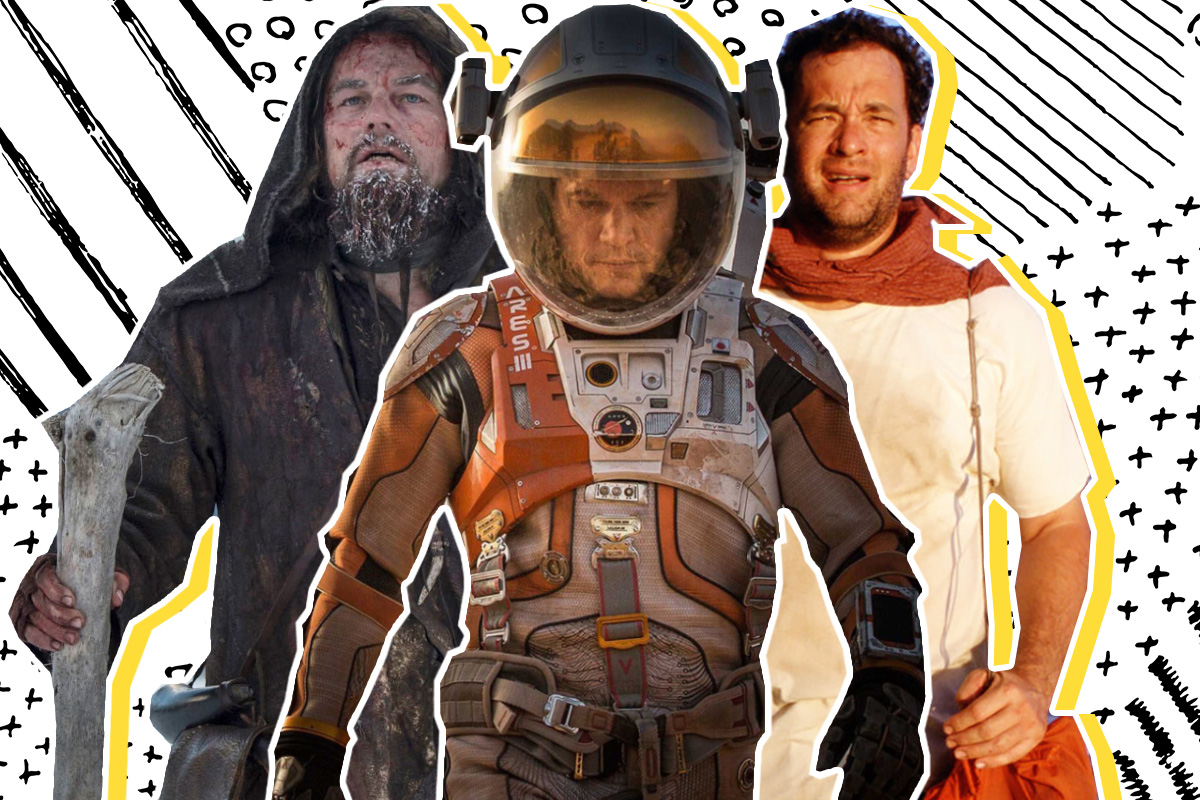 In what extreme conditions only the heroes of the top survival movies do not fall. Whether it is an uninhabited island, mountains, the Arctic desert or the world after global cataclysms, the incredible willpower, courage and endurance of the heroes of these movies would only inspire. If you don’t know what to watch on a weekend or a free evening, check out our selection of top survival movies. Some of the stories are based on real events.

The film “Cast Away” starring Tom Hanks is perhaps one of the most famous films about survival in the wild. The picture of 2000 by Robert Zemeckis is unique, because 95% of the screen time, the viewer sees only one hero – Chuck Nolan (Tom Hanks). This is not an ordinary drama, like other survival films, many critics praised the tape for ease of perception due to entertaining elements. However, “Outcast” is also noted for deep psychologism. The plot makes you think about really important things and rethink the value system.

Werner Herzog’s film is based on real events that were previously shown in the documentary “Little Dieter needs to fly,” received many accolades from critics. The film takes place during the Vietnam War. In 1966, the plane of the US Navy pilot Dieter Dengler (Christian Bale) was shot down over North Vietnam and crashed in Laos. Dengler was captured, went through torture, which forced him to develop an escape plan. Dengler and others who escaped from captivity were forced to hide and survive in the jungle, hoping for salvation, but many of his comrades, subjected to mental and physical violence in captivity, do not really believe in the successful completion of the Dengler plan.

Ridley Scott’s film, which received seven Oscar nominations, earned many accolades in 2015 from film critics and viewers. But a lot of controversy has caused the scientific credibility of the picture. The director said in an interview that science in the film is a separate and very important actor. Despite this, observers found in the film about survival with Matt Damon in the title role a lot of scientific inconsistencies (some of them migrated from the book that made the film). Many reputable scientists found the level of scientific credibility of the picture very low, but the audience was not worried about it. The story of the protagonist who was trying to survive on Mars is truly inspiring.

First Oscar Leonardo DiCaprio got the actor for a reason. His acting in this movie is impressive. The movie takes place at the beginning of the XIX century. A group of hunters survives in the zone of new lands of the Wild West in harsh conditions. Among the dense forests, they are daily exposed to danger not only from animals living in the forests, but also from indigenous Indian tribes who declared war on the white people who invaded their territory. Pathfinder Hugh Glass received grievous injuries in the fight with the grizzly. He appears at death, and his companion, instead of helping, decides to leave his companion in the middle of the forest. The way Glass tries to survive in the wild makes his heart skip a beat.

The film is based on real events. The movie’s director Sean Penn was rated as very bright. The story of the main character Christopher is incredibly inspiring. In the story, Chris, a guy from a very non-poor family, having graduated from college, decides to go hitchhiking. He gives all his money to a charity fund and lives wandering for two years. Christopher earns on various hacks, meets different interesting people who change his life and worldview.

The sci-fi picture about survival in space received ten Oscar nominations and won in seven categories. And this despite the fact that most of the screen time we see only two actors – Sandra Bullock and George Clooney. The main character of the thriller Alfonso Cuarona – Dr. Ryan Stone (Bullock) for the first time in his life goes on a space expedition with a group of NASA experts. The team to repair the Hubble telescope is led by astronaut Matt Kowalski (Clooney). While in space, the shuttle is exposed to rain from space debris, causing the ship to crash. The team left Stone and Kowalski, who do not even hope to escape from this mission.

The thriller of South Korean director Pona Zhong was recognized as one of the best films of 2014, according to the vast majority of film critics. The movie was awarded a mass of awards, mainly, of course, for the incredibly strong play of Tilda Swinton, John Hurt and Chris Evans. The plot of the near future. In 2014, scientists launched the process of combating global warming, which led to a disaster. The consequences caused a new ice age. The viewer sees the post-apocalyptic world of 2031, where the train is the last refuge of the surviving people. As in the big world before the tragedy, passengers are divided into social classes – some are provided with everything, others have to survive.

Another post-apocalyptic movie of the world. The drama of John Hillcoat is a film adaptation of the novel of the same name by Cormac McCarthy. The film tells the story of the survival of a father and son in the world after global cataclysms, as a result of which civilization died, almost all animals and plants. The only food for the survivors was canned food left over after the disaster and other people. Father and son, even in such conditions, try to remain human, eating canned food and hiding from cannibals.

The 2011 film starring Liam Neeson is based on Ian Mackenzie Jeffers’ The Phantom Walker. Alaska of our day. In the depths of its vast expanses, the plane crashes. Passengers surviving a plane crash are left alone with wildlife. Packs of wolves surround those who decide to find the path to salvation, they are getting closer and closer to their prey.

The plot of the film by Greg Macklin with Daniel Radcliffe in the title role is based on real events. Yossi Ginsberg is a guy who decided not to live according to the usual plan for society: university, work, family, children. He goes to South America to explore the lands on which the human foot has not set foot. On the way, she meets a teacher from Switzerland and a photographer from America. Together they try to survive in the wild in the Amazon jungle.

READ ALSO Messiah In Every Home: what the 21st century Jesus looks like
READ MORE Medieval Workout: how to train your man according to the rules of the XVI century!