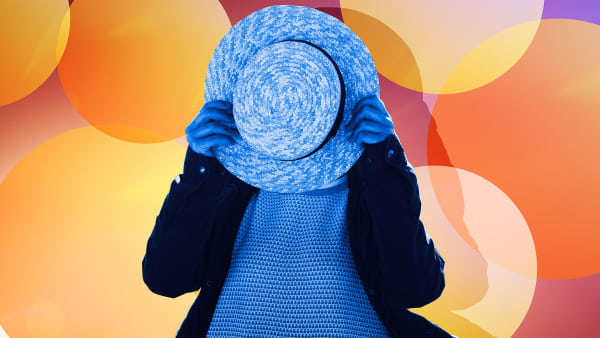 Anxiety and depression make existing difficult in any weather, but there is something especially devastating about spending an entire sunny, warm day under a duvet because you can’t force yourself to leave your house.

On days when it’s rainy and/or cold, staying holed up inside feels fine for the most part. Now that we’re all about coziness and hygge, wrapping up and staying in is validated if not encouraged. But for me, at least, feeling depressed or anxious on a nice day and then staying in to deal with it only leaves me feeling worse — as though I haven’t made the most of the weather and really should be outside interacting with other humans and enjoying life.

More: “Hygge” Is the Best-Kept Danish Secret to Beating the “Winter Blues”

Now, you’re probably thinking something along the lines of “but why doesn’t she just get up and go out?” Been there, tried that. Sure, sunshine and social interaction may be beneficial for some people, but on days when depression is truly kicking my ass — when I feel completely hopeless and like everything in the world is pointless — no amount of fresh air or kind people can help. I’ve tried. In those cases, I’ve typically wound up leaving whatever it was I got dressed for early and then feeling worse yet for wasting my limited time, energy and financial resources on an outing I didn’t get anything out of or enjoy.

And yes, I’ve discussed this with my therapist, who has described this as a form of seasonal affective disorder. But wait. Isn’t that when you get sad during winter when it’s cold and dark outside? Yes, but for some people — including me — the opposite is true. I spoke with some mental health experts to get a better idea of why I feel this way and what I can do to help combat it.

What is seasonal affective disorder?

SAD affects about 5 percent of American adults and lasts around 40 percent of the year for them, typically occurring during the months of fall and winter, when days are shortest and the weather tends to be colder, darker and wetter. It’s more common in women than men.

But don’t we all get a little down during the winter? Sure, but the “winter blues” or “cabin fever” are not the same thing as SAD. And despite having “disorder” as part of its name, SAD technically isn’t its own separate diagnosis, but rather is identified as a type of depression.

Kinsey McManus, director of client services at National Alliance on Mental Illness — NYC Metro, explains that people with other diagnoses can see their symptoms worsen in a seasonal pattern, meaning it must have occurred for at least two years in a row and not be related to personal life changes, like seasonal unemployment or being on a school schedule.

“The seasonal pattern addition means that a person experiences the onset of depressive episodes around the same time of year,” McManus says. “In addition, the person experiences the subsequent ending of depression around the same time of year. For example, over the years, a person notices that they usually start to feel depressed in the fall and generally start to feel better in the spring.”

More: How to Get a Handle on Holiday Depression

Because SAD is something that has become so familiar and is often conflated with the winter blues, some people may be tempted to self-diagnose and not seek professional medical treatment. But according to Dr. Fran Walfish, Beverly Hills family and relationship psychotherapist, it is important to consult with a well-trained, experienced psychiatrist who can evaluate whether there is a neurobiological basis for the depressive episode.

Good to know, but what about people who buck the trend and feel worse during the spring and summer months?

According to Rob Cole, the clinical director of mental health services at Banyan Treatment Center, about 10 percent of those with SAD experience what is known as “reverse SAD,” meaning their depression gets worse as the weather improves.

“For the winter SAD, the most pronounced symptom is lethargy, whereas reverse SAD tends to be characterized by feelings of agitation,” Cole explains. “Reversed SAD may be the result of too much sunlight, which changes the production of melatonin, which can cause sleep disturbance. Additionally, people often stay up later in the summer because of the increased sunlight, which can throw off their circadian rhythm [your internal body clock].”

Along the same lines, according to Dr. Jephtha Tausig, a New York City-based clinical psychologist, people who experience it may not be comfortable with hotter temperatures and greater amounts of sunlight, leaving them feeling irritated and anxious instead of invigorated.

How to deal with reverse SAD

For those suffering from reverse SAD, it is important to continue to get enough sleep and to stay on the same sleep cycle, going to bed and getting up at the same time every day, Cole says.

And even though exercising — or any sort of moving — is the last thing you want to do, it may help. “If exercising outdoors is too draining, go to the gym or try a water sport to help fight off the feelings of agitation in the stifling and oppressive dog days of summer,” Cole adds.

It can also be helpful to think about why you’re feeling worse during a particular season and then figure out how to adjust your environment to make you more comfortable, Tausig suggests. This could include using full-spectrum light bulbs and light boxes, darker blinds or air conditioning, she adds.

And if there’s one thing we’ve learned about seasons, it’s that they change (depending on your climate), so if you see your mental health decline seasonally, you know it’s bound to improve eventually.

“The best personal — and professional — mantra I use to combat negative thinking is the reminder that the trigger issue is temporary,” Walfish says. “Dealing with anxiety-provoking daily issues can be challenging. Life always throws us a curveball with relationship and work letdowns and disappointments.”

Lastly, another crucial tool — which is also a life skill and helpful to everyone, regardless of mental health issues — is developing thinking neutrality, Walfish says, adding that it’s easier said than done. This means that you reestablish a more benign, accepting, self-observing conscience. In other words, the guilt and shame you feel about staying in during the sunny, social summer months may not be a result of anyone else judging you, but more likely, of how you judge yourself.

People raised by overly critical parents may have a tendency to be extremely hard on themselves, Walfish explains, which could result in extreme self-criticism in the areas of body image, intelligence, competence, attractiveness or any type of self-functioning.

To help combat this, Walfish says the first step is to become a benign self-observer, which is achieved by becoming more self-aware and noticing each time you think or feel a self-put-down.

More: Talking About Depression Is Good — Investing in Mental Health Is Better

“You should simply think a gentle shrug-of-the-shoulders comment, such as a tender, ‘There I go again… thinking critical thoughts!’ That’s all,” Walfish notes. “Don’t try to change anything. Just observe without judgment. This is the first giant step toward changing toward positive thinking.”

For me, simply recognizing that my depression and anxiety follow a seasonal pattern has helped. Yes, it still happens, but at least now I know it’s a perfectly legitimate part of my overall diagnosis, and being mindful of that has helped me feel slightly better buried under a blanket in 95-degree summer heat.