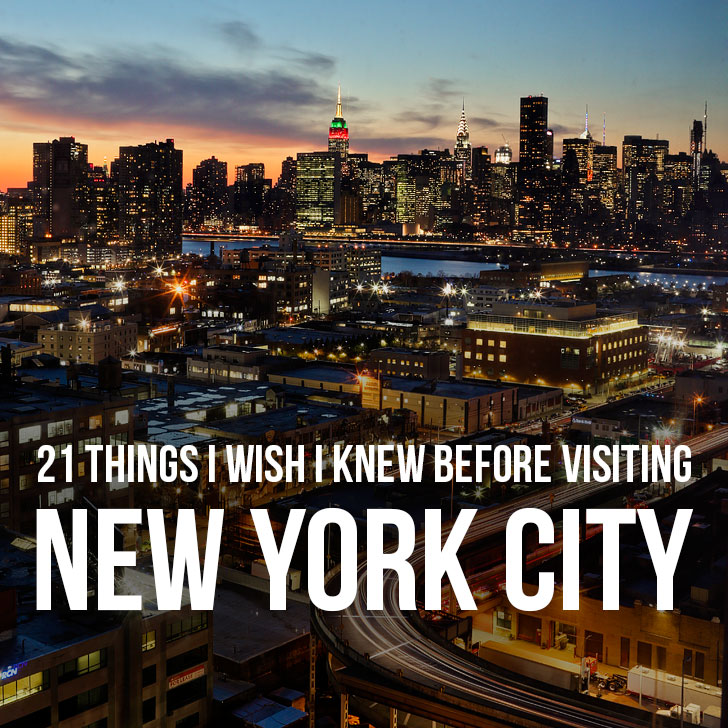 There is no city like New York. If it’s your first time visiting, you probably already have an image in your head of what the experience will be like from TV shows and movies, but you’ll quickly realize that reality may not align with your expectations. 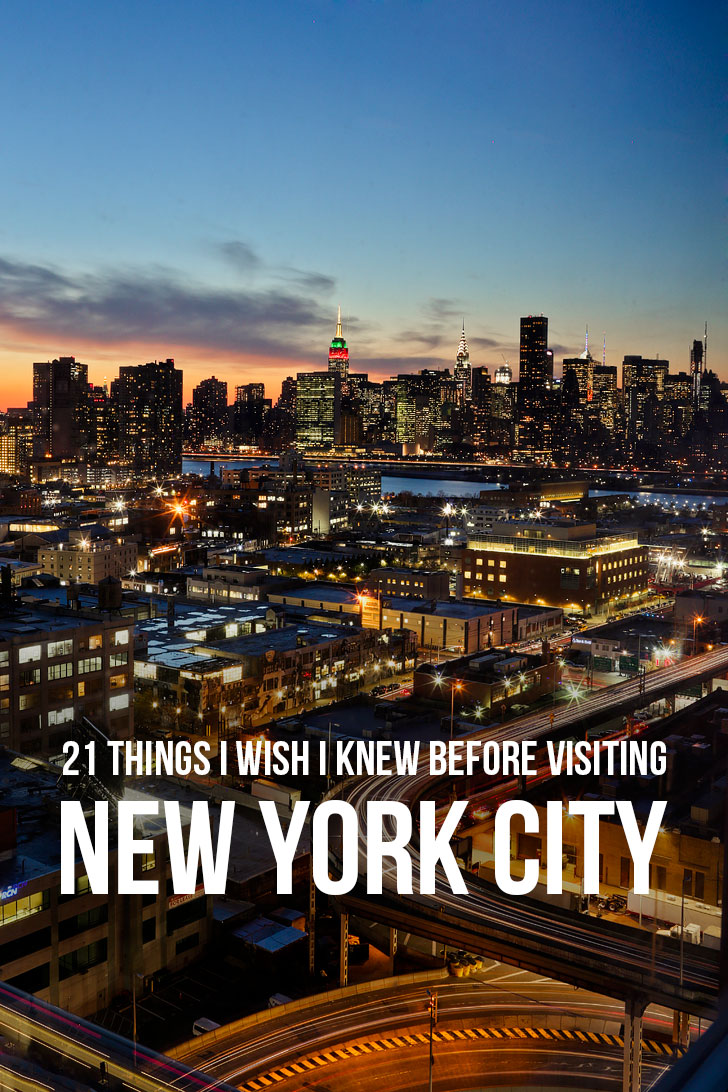 We moved here 3 months ago and have gotten tons of advice from friends who’ve lived here most their lives, but we’re still learning a lot as we go. We’ll continue to edit what we find throughout the year. Here’s our list of things we wish we knew before visiting.

All illustrations used are by Nathan Pyle, our new favorite illustrator!

New York seems to always be busy, but that busyness is multiplied exponentially during any of the major holidays. If you want to avoid the crowds, don’t come at those times. Summer is usually busier as well and very hot and humid, so if you can, visit during the Spring and Fall. If you’re not afraid of the cold, winter is great, because most people don’t want to be here.

2. The City is Easy to Navigate

NYC includes all 5 boroughs, but when locals refer to the city, they mean Manhattan. When you’re surrounded by massive buildings, it can be very disorienting and overwhelming, but the city is easier to navigate than you think. Here are a few simple rules to help you out:

3. The Subway is Easy Too

A lot of people get intimidated to use the subway, but for the most part, the subway system is well labeled and easy to use too. Here are just a few rules to help you get around.

You also have a few options when buying a MetroCard. The most straightforward way is putting money on a card. Each ride then deducts from that amount. You can also purchase unlimited time for X number of days on the card. Since we live in the city, I did the math so I know when to buy unlimited or when to just pay the per-ride rate. Here’s what you need to know.

New Yorkers walk fast, and a guaranteed way to piss someone off is making a sudden stop in the middle of the sidewalk. The city has a flow to it, so try not disrupt that flow. We’ve witnessed plenty of angry locals. If you want to take a photo or look up directions, step to the side. I’m terrible at directions and am always disoriented coming out of a stop. Should I be on the NE corner? The SW? It always impresses me how many people just keep on walking and know their way around the city.

Also, if you’re traveling in the group, be mindful of blocking the sidewalk. Leave space so people can get around you. This applies to stairs and escalators too. If you’re going slower or want to stand there, stay on the right. The left lane is the fast lane.

Puddles in New York are out to swallow you whole. I’ve stepped in a couple thinking they were shallow, only to quickly find out that my whole foot goes in. Good thing I had waterproof shoes. Also, try not to stand too close to puddles or always keep an eye on cars. You know that movie moment when someone gets splashed by a HUGE wave a water from a car driving through a puddle? That happened to us.

6. It’s Not That Dangerous

New York tends to have a reputation to be dangerous, and our parents routinely ask us if we’re safe. It’s generally a very safe city. Like any city, there are sketchier areas, but because there are always people out and about, it’s not a bad place to walk around.

Do watch your belongings closely in touristy spots, that’s where you’ll find more scammers and pickpockets trying to take advantage of people. Just don’t look like a clueless idiot, use common sense, and you should be fine.

Bodegas are found at almost every corner of the city. They are quite perplexing since they don’t really exist anywhere else in the states. Think of a small grocery store mashed up with a sandwich shop crammed into a tiny space. Lots of times, they’ll have a random assortment of snacks, sometimes they’ll have a flower shop attached, and others are known specifically for their sandwiches. Regardless, it’s convenient when you need to grab some quick supplies. If you’re still confused about what’s a corner store, deli, or bodega, here are 11 ways to know if it’s a legit.

Public bathrooms are not always easy to find. Bodegas don’t have them and most restaurants require you to be a paying customer. When you do find a public restroom, be sure to try and go so that you don’t find yourself in a tight spot. Locals have their favorite secret public restroom spots. Should we do a post on this or will we piss off all the locals?

9. Have a Plan to Get To and From the Airport

New York has two main airports, LaGuardia and JFK International Airport. They are chaotic and it can be overwhelming trying to figure out the best way to the city. A couple things to keep in mind:

Hailing a cab is an art form. It rarely looks like what you see on TV, but with a few tips, you can be an expert too. Firstly, get close to the street and maybe even have a foot out onto the street (if it’s safe and there is space for you). Secondly, keep an eye on the lights on the tops of the taxis. If the light is on, then someone is already in the cab. They also have “off duty” lights, so don’t bother with those cabs. Once you see your target, raise your hand in the air and be ready to hop in when they stop for you.

Going sightseeing in New York doesn’t have to break the bank. Check the New York CITYPass if you’re looking to visit some of the most popular attractions. There’s also a ton of free things to do.

There are quite a museums in New York that are Pay What You Like. They usually don’t advertise it very large, and instead, show you what the suggested donation is, but if you’re on a budget, you can visit these museums and pay one or two bucks. We have a thorough list of all those places here. Don’t be surprised if you get some dirty looks though.

13. Don’t Limit Yourself to Manhattan

Most tourists stay in Manhattan, and generally in the central part of the city. There’s a lot to explore in Manhattan and even more in the other boroughs. Brooklyn and Queens are close by and offer a completely different feel.

Don’t spend too much time in the tourist spots like Times Square. There’s just so much to see and do in the city. If you’ve never been to Times Square, you should absolutely go to witness it, but unless you’re seeing a Broadway show, it’s better to use your time exploring the rest of the city. The same goes for most of the other tourist spots.

Central Park is an exception to the rule because it is massive. Most people crowd the Mall and Bethesda Fountain and forget to explore other areas of the 800-acre park. There’s a tribute to John Lennon, reservoir, the Rambles, a waterfall, and more. Even some of our friends who have lived here 10+ years haven’t been to all corners of the park.

Weekends bring huge crowds to popular spots, like the High Line. If you want to see any of the major visitor spots, consider going during the week to avoid ridiculous crowds.

Along the same lines, try visiting very early or really late. Things start to get crowded late morning and they usually stay crowded through the middle of the day.

If you want to watch a show, don’t just look for what’s playing on Broadway. There are great theaters all throughout the city. Check out Playwrights Horizons, the Public Theater, and Signature Theatre, just to name a few. You can get discounted Broadway tickets through TKTS. The main location is in Times Square, but if you want to avoid the lines, go to TKTS at Juilliard.

There are a lot of restaurants in the city, but there are also a ton of people! If you haven’t made plans or reservations, be prepared to wait for dinner. It’s common to have a 45-minute wait during peak hours.

Even though it’s a big city, New York has distinct neighborhoods and villages. Each neighborhood has its own flavor and specialty and can probably keep you busy for an entire day. Here are just a few we’ve been exploring:

It’s important to pack right for New York. We put together a guide for surviving Winter in NYC, but here are some general rules that you can use year-round.

What do you think about this post? Was it helpful? If you want more tips on  New York, check out our previous articles such as the Ultimate NYC Bucket List, 99 Places to Eat in NYC, 11 Top Free Things to Do in NYC, 25 Fun Things to Do Indoors in NYC.

If you liked the illustrations above, check out Nathan’s book NYC Basic Tips and Etiquette book.

PIN IT FOR LATER 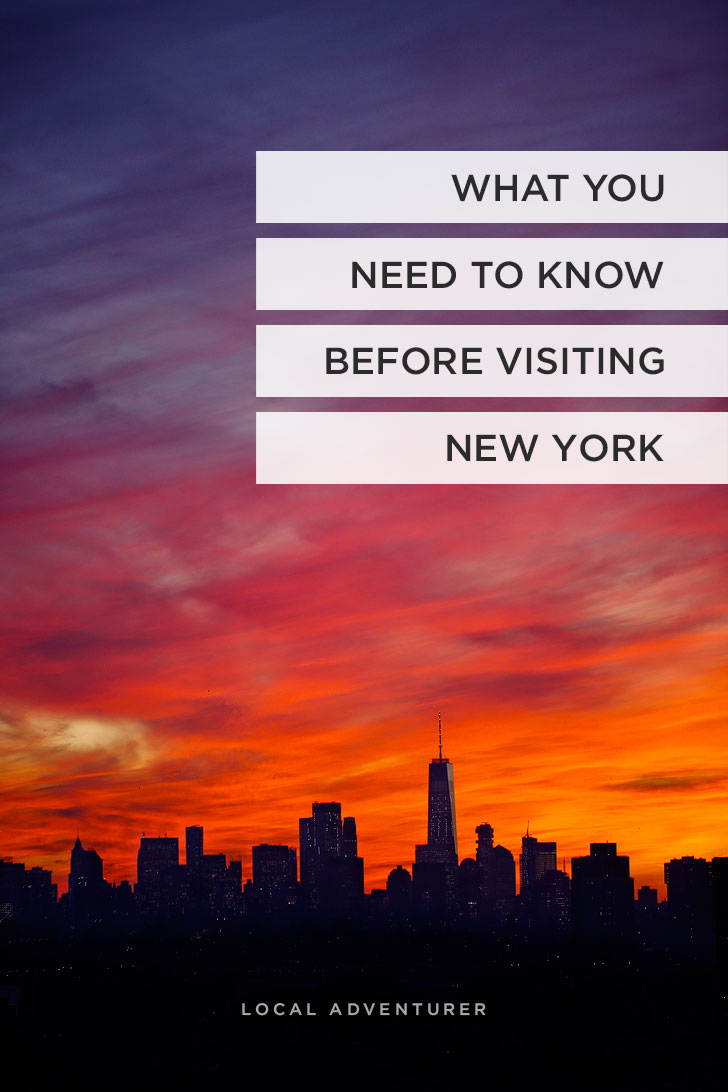 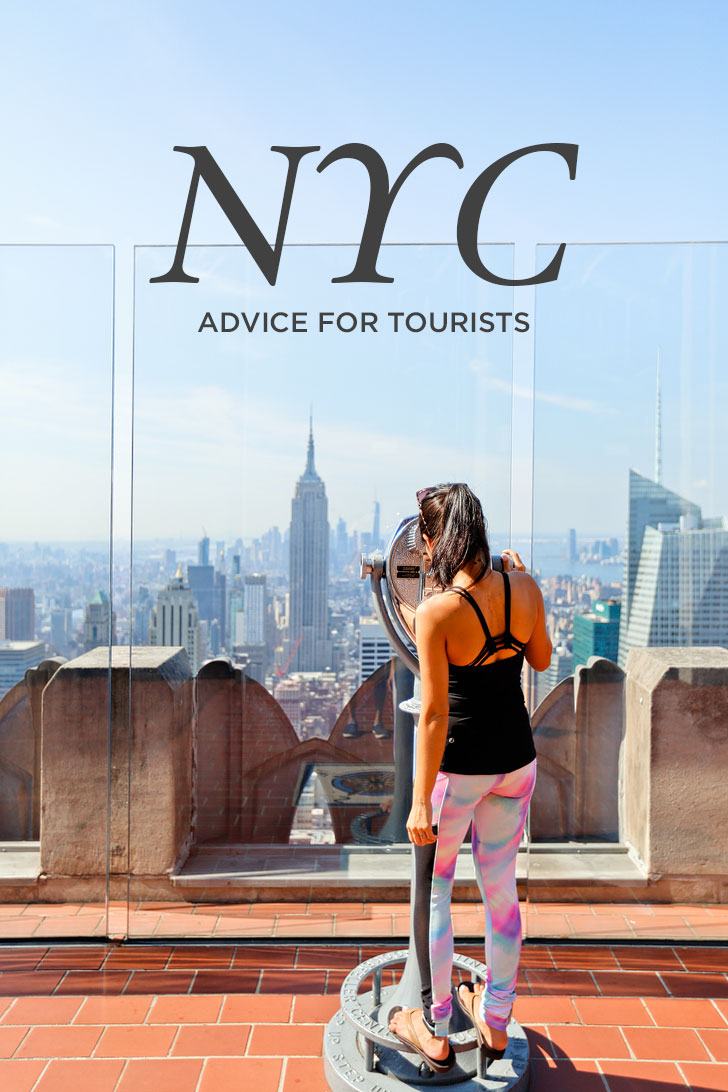 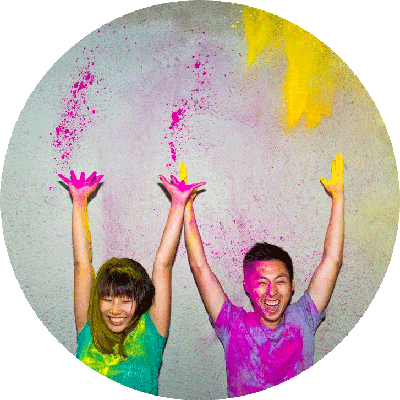 Esther and Jacob are the founders of Local Adventurer, which is one of the top 50 travel blogs in the world. They believe that adventure can be found both near and far and hope to inspire others to explore locally. They explore a new city every year and are currently in NYC.