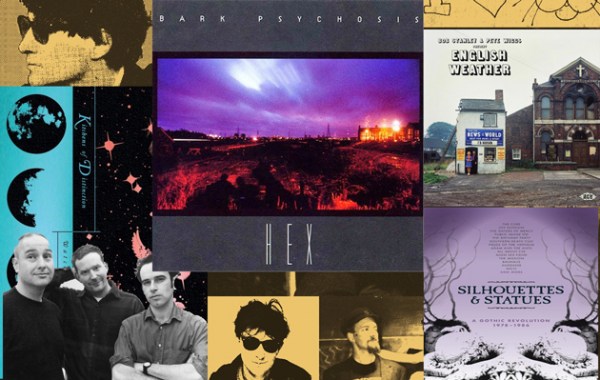 Pat Fish has put out records under variations of The Jazz Butcher name since the mid-’80s, making droll, often heartfelt VU-inspired guitar pop with a rotating cast of friends, including Bauhaus/Love & Rockets bassist David J, members of The Woodentops, and Spacemen 3’s Sonic Boom.

Most of his records has been entirely out of print for years and years, but Fire Records has been righting that wrong with new box set reissues. This year they released The Wasted Years which collected his studio albums on Glass Records which he made with what most fans consider the classic lineup (The Jazz Butcher Conspiracy) which included David J and guitarist Max Eider whose Wes Montgomery style really put the jazz in the Jazz Butcher. His debut, In Bath of Bacon, is a little too DIY for its own good, but when he hooked up with producer John A Rivers (Felt, Love & Rocket), things really clicked. On the three records they made together — A Scandal in Bohemia, Sex & Travel, and Distressed Gentlefolk — the arrangements are playful and the lyrics sometimes nutty, but usually in a politically/socially conscious way. Sex & Travel is especially good.

That lineup of the band folded, along with Glass Records (and their American label, Big Time), around 1987 and Pat signed with Creation. The Violent Years, out March 9, collects the first four Jazz Butcher records for Creation which found Pat getting just a little more serious lyrically and more into VU noise. 1988’s Fischcotheque might be my favorite Jazz Butcher record of them all and includes a couple of his best-ever songs, “The Next Move Sideways,” and “Suzie” (which features Sonic Boom on feedback). There’s also 1989’s Big Planet Scary Planet which had him re-teamed with Conspiracy producer John A Rivers, 1990’s Cult of the Basement (probably his most highly regarded Creation LP), and 1991’s Condition Blue which gave him the closest he ever had to a commercial alt-rock hit in the US (“Shirley MacLaine”).

As glad as I am to see Pat’s albums back in print, both sets feel like a bit of a missed opportunity. As was the norm back then, The Jazz Butcher released EPs and non-LP singles and some of those featured his most loved tracks. (His terrific introduction to America, Bloody Nonsense, was about half songs not on studio albums.) So old fans looking for “Drink,” “JB Vs PM,” “The Devil is My Friend,” and the original version of “Southern Mark Smith” will be out of luck. Perhaps that will show up on on a third box set, along with the final two Creation albums. We shall see.

You can listen to The Jazz Butcher Conspiracy’s A Scandal in Bohemia, below: