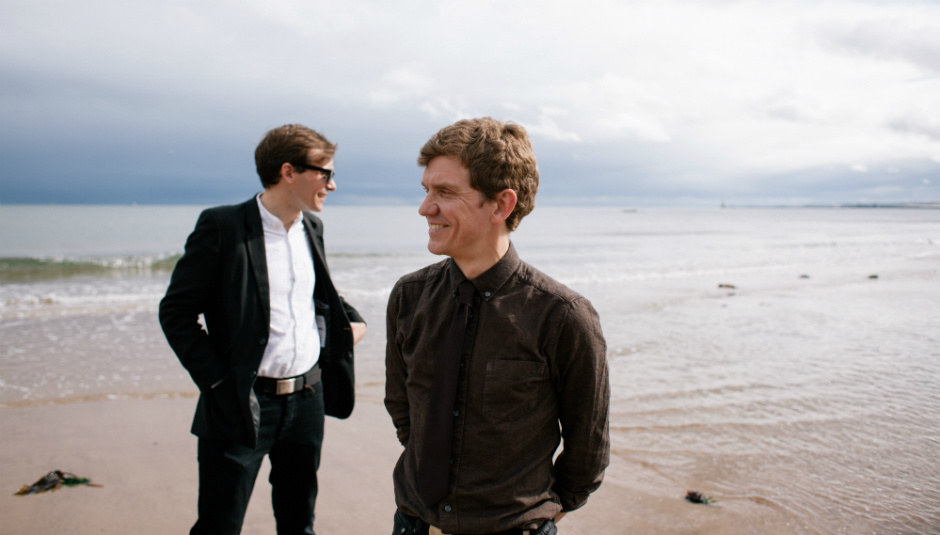 Field Music are very sorry. The Brewis brothers, Peter and David – the band’s twin songwriting nuclei – are a little late coming off their soundcheck tonight, and they start by immediately and profusely apologising for inconveniencing me. I tell them it’s fine; that I welcomed the extra minutes to decompress from a hard day at the office. Nevertheless, even after our chat, they are still contrite, asking if I need more time with them. It’s the sort of geniality I’d hoped to encounter based on their wise and witty output, both with Field Music and in various solo incarnations, over the last decade or so; nevertheless, it’s reassuring to learn that they are indeed as welcoming as their music so often is.

We speak just a few days after the release of a new record, Open Here, which sees the band again pulling off a trick they have perfected over the years: making their musically complex, labyrinthine mini-symphonies sound both effortless and, crucially, accessible. That’s partly to do with the warmth of their sonic palette: bubbly synths, mathematically precise funk-led basslines, clear and bright strings; but is also testament to the quality of the brothers’ songwriting. They have a knack for dropping a great hook into their winding structures which is far from accidental, and it is on formidable display on lead singles ‘Count It Up’ and ‘Share A Pillow’. Elsewhere, the title track is one of those pocket-sized ‘Eleanor Rigby’-esque baroque numbers they do so well; ‘No King, No Princess’ rides a frenetic drumbeat and is punctuated by jaunty trumpet; ‘Daylight Saving’ features swoonsome harmonies over plucked strings. Field Music may never write a chart-topper, or even truly breakthrough in the way that their contemporaries have of late (see: The National, Elbow) but that’s not the point: what they are building is engaging, it is evolving; it is open, here.

—
DiS: To start with: are you counting Open Here as your seventh album? I’ve been trying to work it out!

David Brewis: We count it as our sixth – I think when you’ve released something that’s all your own songs, on all available formats, that’s a ‘full’ Field Music album. Write Your Own History [collection of B-sides / rarities] didn’t quite fit that.

Peter Brewis: We called it ‘FM6’ when we were recording.

Let’s talk about the making of that to start with, and maybe your processes in general – you’re obviously well-practiced at putting together albums now.

Do you still feel like you’re learning as you go along?

PB: Yeah, it’s always a bit of a voyage into the unknown.

DB: I think we feel a lot happier with some aspects of it – I feel a lot more confident as a songwriter now. But sometimes you do get to a stage where you think: “Am I ever going to write a song again? I haven’t written a song for a long time.” I’m having that right now, actually.

PB: Once we have the songs, we’re much more confident of turning it into something worthwhile at the end. Equally, we’re more confident in our ideas, about making decisions on whether to carry on with it, or…

DB: Our ability to find a way to make it work. Early on, those things were kind of crippling.

PB: The other thing we’re facing all the time is: do we have anything left to write about? And it turns out there is. There always is.

Presumably every time you get into the studio, something else has happened in the world, or in your lives, that feels worthy of becoming part of a project?

DB: Too many things, really.

So you feel like there’s always a wealth of material to draw on?

PB: Not always. When we were making Plumb, I remember feeling quite bored with myself – so I wrote about that. But of course, other things crop up all the time – I think if I ever got to the stage when I felt there was nothing to write about, I’d stop straight away.

I’m interested in how established bands maintain their momentum. How do you approach a new project – are you looking to make something better, or something different? Or is it a bit of both?

DB: I think it’s a bit of both, to be honest – we’re always looking to write better lyrics. In fact I think now we’re writing our best lyrics. And these days we’re better with sound, meaning we can try things we wouldn’t have been able to before. But it’s hard to know – when we get to the end of a record and we say: “Do you think it’s our best one?”

PB: The aim is always to make our best one.

DB: Then once you get to the end of recording it becomes part of a bigger, different story than just the story of that record. It becomes part of that musical tapestry that says everything about where we’ve been in the last ten years or so.

PB: I haven’t really spoken to you about this, David, but I do feel like this album is a bit of a full stop for where we’ve been at. It certainly is in terms of the studio [Field Music left their established studio, which was bought by redevelopers, after the making of Open Here]. I think going forward we might start doing things a bit differently – it’s quite exciting, really. Sorry, I know this is probably news to you!

DB: It certainly is!

PB: I just feel like things have to change, just slightly – and to be honest, we’ve already introduced a lot of new things with this record.

About the studio situation… you were handed a notice of eviction for your current place, is that right?

PB: Haha, it was nothing quite as dramatic as that!

DB: We knew our contract was up, but it’s quite a bureaucratic process, so we actually had more time in the studio than we thought we were going to. We handed in our keys a week ago on Friday. We’re in the process of getting a new space ready now.

PB: Every time I’ve been in there [the new studio] I’ve thought: “I’d like to make a different kind of music now.” Do not feel that? You think, “It’s gonna sound different. It’s gonna sound better.”

DB: Yes, that’s true, but also I try and do that with every song I write.

PB: I think it might prompt me to make music a bit differently.

DB: You know what? We’ll say all this, and then to everyone else it’ll sound exactly the same.

I also wanted to ask about the elements of social commentary on the album, possibly including the title? Was that a deliberately political phrase?

PB: It started as a bit of a joke, really. But it ended up tying in quite nicely with some of the other things that are on the album.

DB: I hadn’t even thought about that, actually…

PB: It was already a title of one of the songs on the record – it came from me being quite amused by those wall-mounted bottle openers you get in Travelodges. Then I started spotting this phrase everywhere, almost collecting it… you know, “open here.” I’d see it on packets of nappies, all over the place. So it was intended as quite a light-hearted thing, because there are some quite angry moments on this record.

I think it’s been very important to retain a sense of humour, especially in the last couple of years…

PB: We didn’t want to belittle any events on this record – but yes, I think it’s important not to lose that sense of humour. If you lose that you’ve lost everything, really.

Let’s talk about the Field Music / Open Here Orchestra shows. [recorded and broadcast live on Youtube at Newcastle’s Northern Stage] How did those come about?

PB: It wasn’t really a full orchestra; it’s our orchestra. We were thinking more of the Caledonia Soul Orchestra – I don’t think we’d ever get a full philharmonic in.

DB: We’ve had strings on all of our records, but this one’s got more horns, some flutes… we thought, if we’re going to do justice to the record in a big way, it would great to do a few shows where we have everything.

You two have both had various successful solo projects – how do you know what’s a Field Music song; what belongs to the band and what belongs just to you?

DB: All of the projects we’ve worked on solo have been something that we thought of as “complete”. [Peter’s] The Week That Was was a very complete record; the School Of Language albums I’ve done have very much been bundles of songs that belong together. Whereas with Field Music… we don’t know it’s complete. We might speak with each other about what we’re aiming towards, in terms of a sound or a feeling; but that reveals itself more as we go along. The solo stuff we’ve done is more conceptually coherent – in a way that you can’t be when you’re dealing with one person’s entire way of writing, their overall body of work. Even when me and Peter are writing about the same things, we’re not one entity: there’s always a push and pull with our work – and I think that’s present on all the Field Music records.

Open Here is out now via Memphis Industries. For more information about Field Music, including forthcoming tour dates, please visit their official website.