Home Music Does it hold any potential for music-makers? 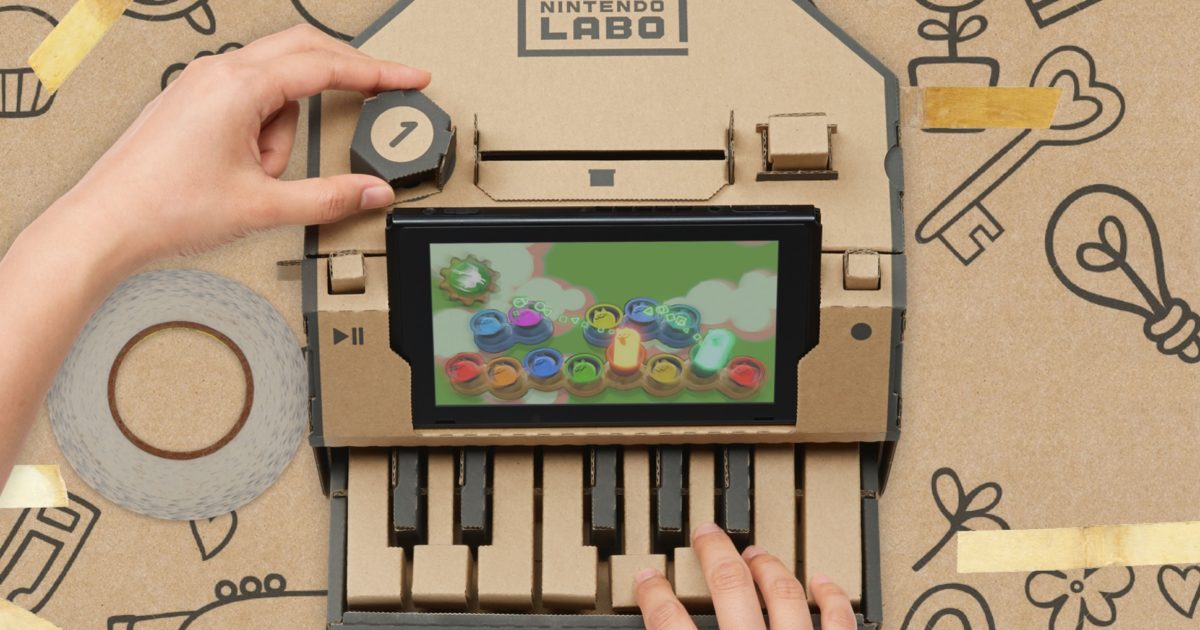 Does it hold any potential for music-makers?

Nintendo’s Switch has been a smash hit, letting gamers play on the move or in front of their TV. Next week, Switch gets its first major add-on: Nintendo Labo, a series of cardboard kits that combine with the console’s components to create different toys – including a piano. But does Labo have any potential for experienced music-makers? Scott Wilson goes hands-on with Nintendo’s latest innovation.

Nintendo isn’t the first company you’d think of when it comes to music technology, but the Japanese video game giant has a history of courting curious, musically-minded gamers. Whether it’s the music generator in the 1992 SNES title Mario Paint, the Korg apps available for the DS handheld or even DIY artists hacking the Game Boy to make chiptune, Nintendo has been helping people to make music for decades. Even Kraftwerk used a modified Nintendo Power Glove peripheral to control synths in the early ’90s.

Despite all this, Nintendo has stopped short of developing its own music-making peripherals (unless you count the DK Bongos that came with 2005’s Donkey Konga rhythm games). That changes next week with the release of Nintendo Labo, the company’s new add-on for its Switch console. It’s part video game, part construction toy and part maker platform; you can buy one of two kits (the Variety Kit and Robot Kit) which both contain a cartridge for your Switch and several sheets of cardboard with pre-cut, push out shapes. These miniature flat-packs can be built into several “Toy-Cons” that interact with the console’s screen and Joy-Con controllers – for example a radio-controlled car, motorbike, fishing rod, house and a piano.

I was given a sneak preview of Labo last week and had hands-on time with all of these. They were ridiculously good fun: I used felt and pipe cleaners to turn my RC car into a Goomba from Super Mario Bros and battled it sumo-style; raced a motorbike around a track in a game that was just as fun to pick up and play as Mario Kart; fed a weird creature inside a house with jellybeans; caught some fish; and put on a cardboard robot costume to stomp, smash and fly my way around a destructible cityscape. What I was most interested to try however was the Labo Piano, a musical instrument with cardboard keys, pitch bend lever, swappable volume and effects knobs.

You build the piano from its basic cardboard components with the help of a LEGO-esque instruction manual on the Switch screen itself, a process that Nintendo told me could take anywhere up to a few hours depending on age and ability level. Once you have your cardboard shell, the Switch screen slots in the front and right Joy-Con (the one with the IR camera) slots inside while the left Joy-Con sits on top. The Labo software offers two ways to use the piano – as a basic instrument and as part of a GarageBand-style studio – albeit done in a very cute Nintendo style. When you press a key, the IR camera detects which one has been triggered and plays the corresponding note via the Switch screen’s built-in speaker. It’s incredibly simple, but that doesn’t make the fact that you’re playing a cardboard piano that works any less mind-blowing.

You can also construct four interchangeable knobs that fit in a hole at the top, each of which controls a different parameter: volume, reverb, envelope and one that vibrates the second Joy-Con for an acoustic sound effect as it rattles off the cardboard surface. A few different patches can be selected, each of which can be transformed from a short, sharp struck note to a drawn out pad sound. The sounds are very simple – a piano, a cat, a very strange singing man – but for anyone with no prior synth experience, the Labo piano offers a simple but effective primer on the basic principles of synthesis and sound design.

The piano’s wildest feature is the ability to scan your own custom waveforms. Just cut a waveform shape into a piece of card, slot it into a hole on the top, and it will modify the sound accordingly. Obviously, you can use a conventional shape like a sawtooth wave, but you’re probably going to have more fun seeing what kind of sound Mario’s face would generate. The input slot also allows you to sequence your own drum loops: you’re supplied with a piece of card in the Variety Kit with four rows of pre-cut holes, each row corresponding to a different drum track and each hole a point on the loop. By pushing out the card you can ‘sequence’ your own drum loops. It feels a little laborious to put together a rhythm in this way, but as with the piano’s other functions, it gives you an easily-digestible introduction to the basics of how a real drum machine works.

It’s these little applications of real-world functions that make the Labo piano more than a toy, because as simple as it is, using it is also a learning experience. The GarageBand-style Studio allows you to go even deeper; here you can wield a baton to change the tempo, change the octaves of notes and record your own simple tracks. Trigger the record button on the top right and the screen flips to a track view that records the notes pressed for later playback. It’s very, very basic – you certainly won’t have producers using it in the way early grime and dubstep producers used the PlayStation’s Music 2000 to make instrumentals – but the fact that Nintendo has put what amounts to a very simple DAW inside a cardboard toy is pretty significant. For a lot of kids, the Labo Piano will be their first experience of using a musical instrument.

So does the Labo have any potential for grown-ups or the DIY community? As far as the Piano goes, possibly not. It’s not the kind of thing you could circuit-bend (unless you want to brick your Switch) and it doesn’t give you many sounds to play with. Even in terms of mobile music-making it’s nowhere near as powerful as Groovebox, Auxy, ROLI’s Noise or any one of the many all-in-one music studio apps available for iOS. But go deeper into the Labo software and there’s a component that could prove very exciting: Toy-Con Garage.

Nintendo Labo’s slogan is “Make, Play, Discover” – first you build your Toy-Con, next you play with it, then you discover what makes it tick. In the case of the Piano it’s finding out that the IR camera is detecting key presses, but there’s a whole ecosystem that enables the Switch to respond to the Toy-Cons and make things happen. For Nintendo though, it doesn’t end at just finding out how this ecosystem work – it’s about using this knowledge to create your own systems as well. This is done inside the Toy-Con Garage, a section where you can write your own code to get Labo to do what you want. It reminded me a little of Max or Reaktor’s visual environment, but much simpler: you connect input and output blocks from left to right and the Switch will performs certain actions in response to stimulus.

For example, you can select “If a Button Is Pressed > Joy-Con (L)” as your input and “Make Sound > A” as your output to play an A note. You can also map actions such as “If Shaken” and “If The Joy-Con Is Face Up”. It’s really easy to pick up the basics and create a simple line of code for playing melodies via the Joy-Cons, but this extends to the Switch’s screen as well. In the example I was given, you can turn the Switch into a stringed instrument by writing code that transforms the touchscreen into a simple keyboard and wrapping rubber bands around it to simulate a guitar. Again, it wouldn’t necessarily be the kind of thing you’d make recorded music with, but the process of using code to create an instrument is just a very simplified version of making your own synths on Reaktor 6 or Max for Live.

Once Labo hits the shelves we’ll undoubtedly see people doing things with it that not even Nintendo could have imagined. Musical instruments will probably be a part of that, but for the time being those instruments will be limited by the sounds they can create. Labo is, after all, a toy, and though there’s nothing stopping Nintendo adding a deeper synthesis engine as a future update, it would go against Labo’s inclusive, pick-up-and-play ethos. But there’s every possibility we could see people using the Toy-Cons to create mechanical contraptions to trigger existing instruments, as with Dadamachines’ recent Automat Toolkit. The most significant thing it will do however is introduce people to music who have never played an instrument and get people who have never coded interested in creating their own instruments. Companies like Native Instruments and Ableton should look closely at this generation of Labo users – they could well be the musical innovators of the future.

Scott Wilson is FACT’s tech editor and a lifelong Nintendo fan. Find him on Twitter