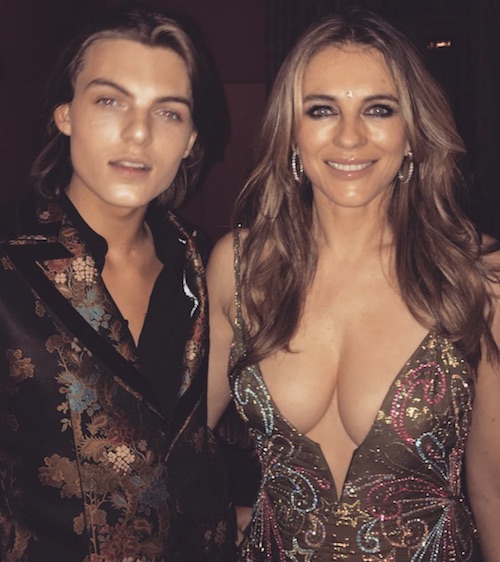 We may never hear the words “…and the Academy Award for Best Actress goes to Elizabeth Hurley!” But, by GAWD, we will always be able to count on Liz bringing her golden globes around for a photo shoot. She jet sets with the gals all around the world to show them off at fancy places like Elton John‘s lair or Valentino‘s estate, and her own son’s birthday is no different…and that’s where stick-in-the-mud critics are crying foul.

Page Six says that Elizabeth Hurley’s Instagram followers got its panties in a bunch when she tested the abilities of boob tape in a photo she posted to wish her son, Damien Hurley, a happy 16thbirthday. I looked at it and thought it was sweet to see mother and son engage in a friendly competition of “Who can wear something with the tackiest Las Vegas casino carpet design?” Alas, most people thought it was inappropriate for Elizabeth to bare ‘dem boobies for her “little prince.” One commenter shouted from their high horse, “Creepy showing off at your son’s birthday. Cover up you’re a mum.” Don’t fret, user! She is an equal opportunist creeper. Just look at what she did with her recovering nephew all covered up at Easter!

Some people came to Liz’s defense, with one fan saying, “You and your son, please enjoy yourselves and live your lives. Don’t worry about the naysayers. Best wishes.”

I don’t get why everyone is such a sensitive Sally over this! It’s not like she celebrated his birthday with what I would think is the Hurley rite of passage by trying on that Versace safety pin dress and flying down to Lake Como to spend a week smoking Parliaments with Aunt Donatella. Hell, she could have even used him as a test animal for Estee Lauder blush and foundation prototypes, but she didn’t!

Our commenting rules are pretty simple: If you make any overly offensive comment (racist, bigoted, etc..) or go way off topic when not in an Open Post, your comments will be deleted and you will be banned. If you see an offensive or spammy comment you think should be deleted, flag it for the mods and they’ll be forever grateful and give you their first born (although, you probably don’t want that).