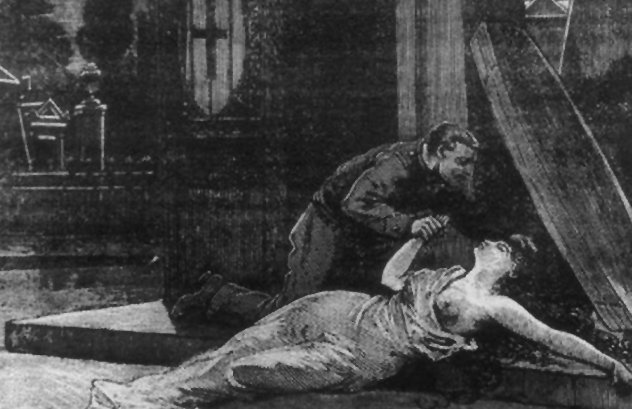 The concept of “necrophilia” became widespread when, in 1894, Richard von Kraft-Ebing published his work Crimes of Love. Sexual psychopathy ”, in which necrophilia is called a“ terrible manifestation of sadism ”.

Well, Furilia invites you to understand the intricacies of the issue and, perhaps, discover new nuances of necrophilia. Why don’t we need to delicately ask these nuances 🙄 but just in case, we warn you: the material in article 18+, show your passport to the webcam 😎

“Necrophilia” – a term that is mainly used in psychiatry to describe the sexual attraction to the bodies of deceased people, is an extremely rare disease. Often we misunderstand necrophilia, linking it exclusively with the criminal aspects. So, does necrophilia have hidden meanings?

It has been noted that cases of necrophilia have occurred throughout history. The Greek thinker and writer Herodotus in his “Stories” stated that in Ancient Egypt the bodies of beautiful women were embalmed not immediately after their death, but only after a few days. These measures were taken in order to prevent cases of “relations” between the embalmer and the deceased woman. And this, apparently, has happened more than once …

According to the Talmud, King Herod lived for seven years with the corpse of a girl whom he had not married during her lifetime. It is believed that he embalmed her to enter into an intimate relationship. Others say that he did not have this kind of “communication” with her. Josephus, whose works are the main source of data on the life and character of Herod, says nothing about the necrophilic inclinations of the king.

According to criminologist Herschel Prince, until the 19th century, if a betrothed girl in Central Europe died the day before the wedding, her husband could still marry her and enter into an intimate relationship.

The romantic aspect of necrophilia

The strange life story of Karl Dancer confirms the idea that the truth is sometimes weirder than fiction. Although his terrifying secrets were made public, the Dancer always claimed that everything he had ever done was an expression of deep love and affection for a woman. He was sure that he could revive the deceased beloved. 20 years after the death of Helen – Lady of the Heart of the Dancer – Karl’s pathological obsession remained as strong as before. The dancer could free himself from a strange feeling only after his own death in 1952.

Count Georg Karl Dancer von Kozel was born on February 8, 1877 in Dresden (Germany). Almost nothing is known about Karl’s parents (except that they were very rich people), but he had a brother and sister. Karl is a curious boy. His childhood was not distinguished by striking events, with one notable exception. Later he will mention the incident: as a child, Karl allegedly visited a ghost. The “guest” was Anna Constance von Kozel – according to Karl, his relative. Anna was the favorite of the Saxon king Augustus the Strong. The ghost showed young Karl the face of a dark-haired girl. Since then, the Dancer has been looking for this girl – the only true love.

In his youth, Karl Dancer liked to surprise others. For example, he boasted that his resume included nine degrees. This was a dubious statement. He held various positions, worked in the field of shipbuilding and engineering. Dancer’s passion is invention. In his youth, he even built a makeshift organ, dreaming of playing the Bach fugues. He also traveled frequently. Karl visited Australia, India, Italy, visited the southern seas … While he was in Australia, the First World War began. To go to the “southern seas” Karl was advised by the same ghost who told him about his future lover. However, the ghost’s advice failed Karl: since he was a German citizen, the Australian authorities sent the Dancer to serve his sentence in a prisoner of war camp. Karl’s property was confiscated. Well, perhaps the concerns about the Dancer were not in vain: it turned out that he was in the ranks of members of the Rosicrucian order. At that time, international law forbade prisoners to return to their home country, so at the end of the war the government sent Karl to a Dutch psychiatric hospital. After that, the dancer left for Cuba. And, yes, Anna’s ghost also advised him to recover there.

When Carl was in his forties, he married a woman named Doris Schafer. The couple had two daughters, but the marriage was far from ideal, primarily due to the frequent travels of the Dancer.

In 1926, the Dancer sailed to Cuba – himself, without a family, and soon after that he emigrated to the United States. He settled in Zephyrhills, Florida. Later, the Karl family moved here. But a year later he again left his relatives, moving to Key West. At this moment, he took the name von Kozel. The dancer worked as a radiologist at the United States Marine Hospital.

Although he was not popular with colleagues who considered him very self-confident and overly selfish, his eccentricity was largely ignored due to his relative competence. And professionalism at that time was a rare and necessary product.

Elena was born July 31, 1909 in Key West, Florida, and was an amazingly attractive girl. Luxurious dark hair, burning eyes combined with attractive shyness. Of the three daughters of the Cuban businessman (Lena’s father kept the cigar business), Elena was the most beautiful. The girl had many fans, so it is not surprising that Elena got married very early. Early marriage was common among the Cuban-American community. Husband of Elena became a certain Louis Mesa. The wedding took place in 1926, she was then 17 years old.

Unfortunately, the marriage was unsuccessful. Shortly after Elena lost her baby, Louis (for unknown reasons) left his young wife and moved to Miami.

April 22, 1930 the girl’s mother Aurora de Hoyos, worried about Elena’s illness, brought her daughter to the hospital for examination. It was found that the 20-year-old beauty was sick with tuberculosis – a disease that at that time was considered incurable. By the will of fate, the Dancer was also present here. Looking at Elena, he convinced himself that it was her face that a ghost had shown him many years ago. In his opinion, Elena is his only and true love.

The eccentric romance of Karl Dancer

Convinced that saving Elena from certain death was his fate, the loving doctor persuaded his superiors to allow him to conduct his own experimental treatment of the girl. He embarked on a series of special procedures consisting of homemade elixirs, herbs, and other medicines. In addition, Karl lent (without permission) expensive equipment, including an X-ray machine, which he installed in the house of de Hoyos. The doctor also showered Elena with expensive gifts, and although she did not reciprocate, he constantly declared his eternal love and devotion to her.

Despite tireless efforts, Elena died on October 25, 1931. Karl Dancer insisted on paying for all the funeral expenses, even hiring a specialist to embalm Elena’s body. The dancer managed to convince the deceased family to let him buy an expensive stone mausoleum for Elena. Time passed, and the doctor’s behavior became more and more strange.

Karl had the only key to the mausoleum, and he used it to regularly visit Elena’s body. His visits lasted for two years, and when local residents paid attention to this, bad rumors began to spread … This led to the fact that Karl was fired from his job in the hospital. The undaunted Dancer went even further: he transported the corpse of Elena from the mausoleum to his home.

Karl Dancer and Elena were together again. However, the question still remained open: how to save the body of a lover? The Mad Doctor has taken extraordinary measures, including:

Karl dressed Elena in her clothes, which she managed to keep, and in new outfits that the Dancer bought specially … Also, Elena’s body was constantly in Karl’s bed.

This behavior lasted almost 7 years. Meanwhile, alarming rumors continued to circulate throughout the county. People watched the doctor dance with a giant doll. They also said that he was building a plane on which he planned to fly with Elena into the stratosphere in order to revive her. In addition, people believed that the Dancer was sleeping with Elena’s corpse (authorities suspected Karl of necrophilia, and subsequent body examinations seem to confirm this).

Karl Dancer did indeed build something that looked like an airship … A turning point occurred after the sister visited Elena’s dancer’s house, who, having seen the girl’s corpse, notified the authorities who immediately arrested the doctor on charges of “desecrating the grave”.

The trial of Karl Dancer and further developments

Karl was examined by doctors: the dancer was declared mentally sane to stand trial. The doctor claimed that he planned to use the airship to travel his caged wife’s body “high into the stratosphere so that radiation from space could penetrate Elena’s tissues and return life to her sleeping body”.

The lawsuit of the mad doctor attracted crowds of onlookers and became a sensation for the media. Accepting the accusations, the doctor did not apologize, but only again declared his “eternal love and devotion” to Elena.

At the preliminary hearing, the case was dismissed due to the expiration of the statute of limitations. The dancer was released.

The remains of Elena were examined by pathologists and doctors. Due to the unique safety of the corpse, the girl’s body was put on public display at the Dean Lopez funeral home. More than 6,000 people came to look at the wax-like features of the corpse. Entrance cost only 1 dollar. After this show, her family buried the girl in an anonymous grave, and Elena finally received the peace she deserved.

Karl Dancer led a closed lifestyle until his death in July 1952. Still in love with Elena, the Dancer created a plaster death mask of the girl’s face. The cast has become part of a life-size sculpture, created in the likeness of the “original” Elena. The dancer was found lying on the floor almost a month after his death. Hands of the sculpture hugged the deceased doctor.

Bizarre and amazing stories are not uncommon in the world. Although sometimes something is found that is truly amazing! For example, you may be surprised abandoned places and the secrets they keep, or else medieval horrors that have become legends …