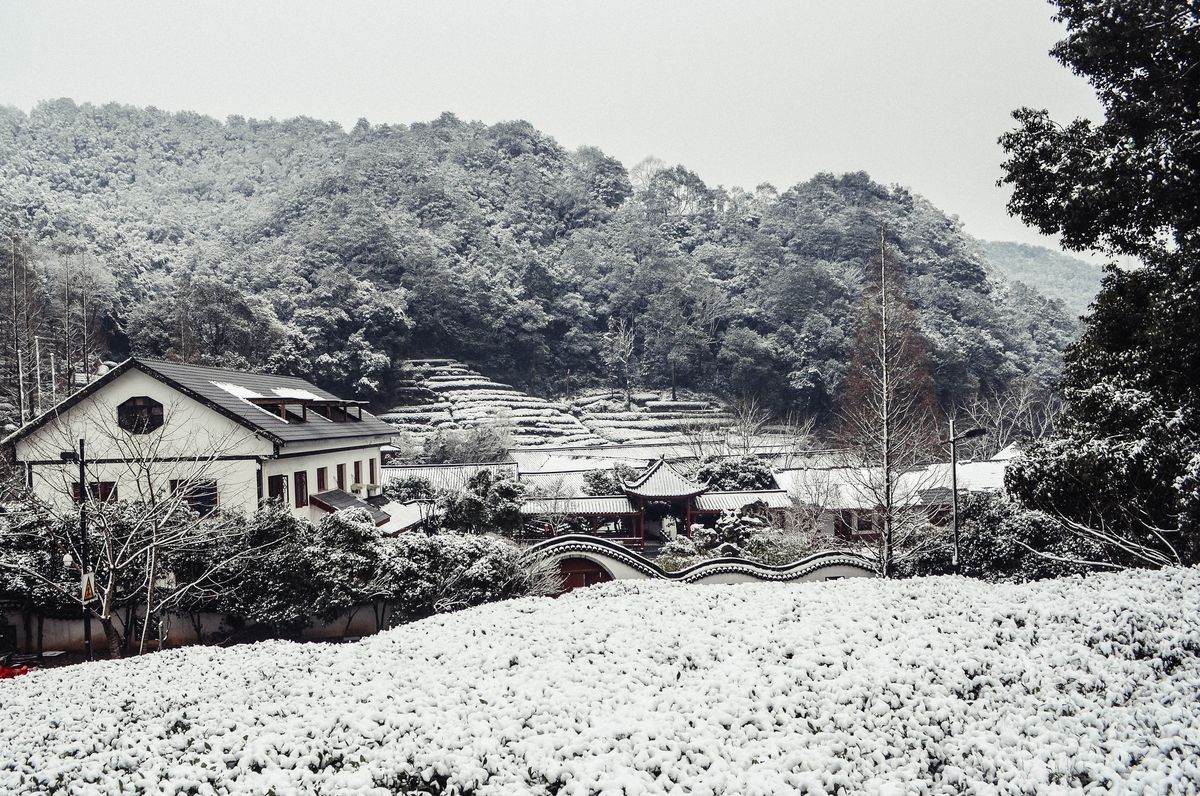 Hangzhou, a two-hour drive southwest of Shanghai, is one of the main destinations in the Yangtze River Delta, a historically fertile region. Here, communities have built their entire livelihoods upon the ebb and the flow of the waterway. The city’s crown jewel is the West Lake, a glassy body of water that has been the inspiration of poets and scholars for centuries. It was once surrounded by idyllic family farms, sleepy pagodas, and rickety fishing boats. Bo Juyi, a Tang Dynasty poet and government official, once wrote of the area:

Now spring is here the lake seems a painted picture
unruly peaks all round the edge, the water spread out flat
Pines in ranks on the face of the hills, a thousand layers of green
The moon centred on the heart of the waves, just one pearl.
Thread ends of an emerald-green rug, the extruding paddy-shoots
Sash of a blue damask skirt, the expanse of new reeds.
If I cannot bring myself yet to put Hangzhou behind me,
Half of what holds me here is on this lake.

Surrounded by fields of green tea, it was once the capital of the former Song Dynasty, a golden age of tea in China, where the beverage was such a cornerstone of society that nobles and scholars would hold tea parties in the hills. In these parties, tea sets would be packed in wooden baskets, brought up to a vantage point, and folks would draw water from the nearby streams and heat it up for their infusions. And then there were tea battles, where people would put powdered tea in a bowl, agitate it with a bamboo whisk until fine froth emerged in the cup, and judge each other on the results. This became a wide source of entertainment and debate. A good cup was one where the color was kept fresh, the foam was white, and the surface was even. This, after all, is where the Japanese got matcha from.

With all this in mind, when I visited Hangzhou, I expected to be greeted by towering pagodas on a quiet lake and rows of green tea bushes, flanked by idyllic tea houses and spring water bursting from the mountains. I expected tea to be on nearly every block. I expected tranquility and poetry, trickling down freely on the streets.

Instead, I was met with a bustling cluster of skyscrapers and roaring traffic. There was a brand new subway system and I found myself oddly captivated with the underground vending machine that squeezed out fresh orange juice from real oranges. I also spent many hours perusing and testing out the food delivery apps available in the city. There wasn’t a single tea bush in sight.

Turns out I was just looking at the wrong spots. Tea plantations exist, just tucked away in the hills of the West Lake, and in Longjing, a village on the southeast side of the city, I visited the Hangzhou National Tea Museum, the only museum in the country dedicated to the beverage; it has its own tea plantation and a research center. Longjing is also home to 18 tea trees planted by a Qianlong Emperor who visited the area in the 18th century and fell in love with the tea. These nearly 300-year-old imperial tributes are icons, well-protected by a stone fence and surrounded by a park.

Today, Longjing produces some of the most expensive green teas in the country. Five hundred grams of tea picked in the early spring, when the leaves are most tender, can retail for as much as $145 USD. Longjing, which translates to “dragon well,” is named after an actual well in the village where, according to legend, lives a subterranean dragon that can access the sea. The water within is said to contain magical properties. You can take a sip or rub it on your face; locals say it can cure nearly any ailment. Green tea from Longjing is made exclusively from young buds harvested in early spring and gently pan-roasted by tea farmers, which gives it its signature nutty aroma.

“Longjing tea has always been a part of my life,” Amy Duan, a Hangzhou native who is behind TheChihuo.com, Los Angeles’ biggest Chinese food blog, says. “I never gave much thought to it when I lived there because it was such a normal part of our day-to-day life and because we always had it at our house.”

“[It] is a microcosm for China, a place that’s growing so quickly it barely has time to acknowledge its history. ”

The truth of the matter: While Hangzhou was historically the stuff of poetry, teeming with gorgeous waterways and wildlife, today, it’s home to new wave of romantics. But instead of writing verse, they’re composing code (hence the spectacular number of delivery apps in the city). It is the Silicon Valley of China. It is the home of Alibaba, China’s answer to eBay, and in recent years, a bevy of startups have opened up around the e-commerce giant, all vying to be the next big concept.

I had met up with an acquaintance there who works in the startup industry. He took me to his co-working space in the city, similar to the ones in the States, where different companies and freelancers can rent out space in a building. The biggest difference was that the lobby had a Chinese tea bar, where a server would pour out drinks for employees in traditional Chinese tea cups. Longjing green tea, of course, was on the menu.

While energy of the city may lie in modernity, the taste buds of the city are still deeply rooted in tradition. Nearly all the restaurants in Hangzhou offer Longjing green tea, and many feature a dish called longjing xia, which is tiny river shrimp doused in tea water and decorated with bright green tea leaves.

Others have gone so far as to dedicate entire restaurants to the local tea. There’s a restaurant chain called Green Tea that has a massive menu of all things tea. They do a marvelous duck and pork smoked with tea, as well as bread and beer flavored with the tea leaf. Broadly speaking, the cuisine of Hangzhou reflects the seasons and what is available in the land. In the spring, tender bamboo shoots are a mainstay. Lotus, which grows on water, is harvested often for its starchy roots.

Many dishes come with backstories. Dong po pork, Duan says, is one of her personal favorites. It’s a cubed piece of pork belly slow-cooked in a soy-based sauce until it turns a crimson red. It is named after a Chinese poet and scholar by the name of Dongpo. “Hangzhou has a lot of rivers and creeks and alongside these waterways, they will grow a lot of special vegetables. A lot of our fish comes from these rivers as well, where they are cooked gently in order to let their individual flavors shine,” she says.

The most emblematic dish of the city is a river carp called xi hu cu yu, or West Lake vinegar fish, which is gently steamed with vinegar and ginger. A notable rendition is served at a famous restaurant by the lake called Lou Wai Lou, one of the most celebrated dining spots in Hangzhou, with a history of over 150 years. There, a little girl had approached me and my friend as we were eating. It was towards the end of dinner service, and we were one of the few people left in the restaurant.

“Hello. Are you zhongguoren?” she said, verbatim, smiling up at us. Zhongguoren means Chinese person in Mandarin. Her hands were in her pocket, and she stared up at us, wide-eyed. The waitresses, visibly amused, all stopped what they were doing to watch the scene unfold.

“Hi! Yes and no. I’m from America, but I am also from here, kind of,” I responded back in Mandarin.

She told me she had heard my friend and I speaking English and wanted to converse with us with the little English that she knew. We asked her how old she was; she was just 11.

“I love America!” she concluded, at the end of our conversation. “One day I want to visit.”

That interaction summed up the polarity of city: It’s entirely Chinese, but with the deep aspiration to become a city with Western characteristics. And as my friend and I left the restaurant to hail a taxi, I couldn’t help but notice a Starbucks on the same street. Hangzhou is but a microcosm for China, a place where growth means more concrete and taller buildings, a place that’s growing so quickly it barely has time to acknowledge its history.

Food and tea are one of the few mediums left where the city’s romantic past is diligently and consistently acknowledged.

One snowy day, I was invited to a private gathering on the top floor of a hotel that overlooked the edges of the West Lake. There, my friends plucked the strings of a guzheng (a Chinese piano) and tried our hands at calligraphy. There was a tea table at the center of the room and as we dabbled in the arts and chatted, the staff taught us how to pour a proper cup of Longjing tea. Every tea, they told me, has its own specific ritual to match it.

The directions for Longjing tea were simple: Add the dried tea leaves into a long, tall glass and pour hot water in.

“That’s it?” I asked. I was expecting a more complicated ceremony, like that of oolong tea and pu-erh, which uses small teapots and teacups.

“Yes,” a staff member responded, smiling. “The clear glass allows you to fully appreciate the visuals of the leaves as they unfurl. And this way, they’ll have the space to dance.”

This article originally ran in July. We’re running it again because Hangzhou looks so beautiful in the snow.