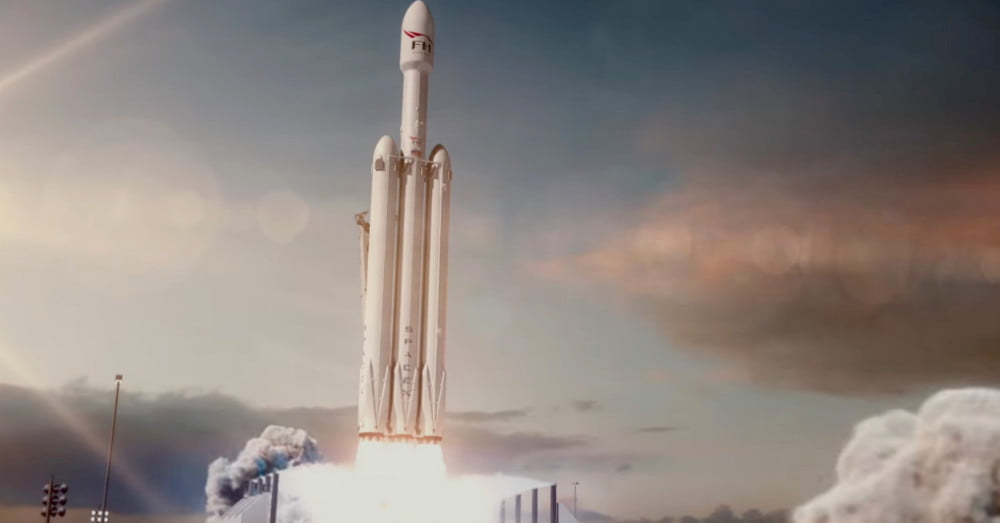 We’re just hours away from SpaceX attempting the debut launch of its huge Falcon Heavy rocket, an event that’ll make it “the most powerful operational rocket by a factor of two,” as SpaceX CEO Elon Musk once pointed out.

A new video animation released on Monday shows how the SpaceX team would love the test launch to go, but as Musk has said on several occasions over the last year, there’s a good chance the whole thing could quite literally go up in smoke. Following the mother of all explosions, that is.

With Bowie’s Life on Mars (the mission is heading there, y’see) as its soundtrack, the animation begins with the almighty Falcon Heavy — essentially three Falcon 9 rockets strapped together — ready to launch at the Kennedy Space Center. Just before the 27 Merlin engines fire up, we glimpse the rocket’s Tesla Roadster payload (well, they wanted to send something) at the tip of the Heavy. Musk said he loves “the thought of a car drifting apparently endlessly through space and perhaps being discovered by an alien race millions of years in the future.”

With the countdown complete, the Heavy roars into life, generating 5 million pounds of thrust, equal to 18 Boeing 747 aircraft, as it lifts off the ground. As with the previous Falcon 9 launches, the Heavy’s boosters will return to Earth for reuse — part of SpaceX’s plan for lowering the cost of space travel.

The animation shows the two side boosters returning pretty much at the same time, landing back at the Kennedy Space Center. The center core, however, travels on further and so comes back a little later, touching down on a SpaceX drone ship in the Atlantic Ocean.

If all goes to plan with the second stage, “at max velocity the Roadster will travel 11 km/s (7mi/s) and travel 400 million km (250 million mi) from Earth,” passing Mars and entering into an orbit around the sun.

Musk’s private space company points out that despite the new rocket on this occasion carrying a car instead of a crew, the “Falcon Heavy was designed from the outset to carry humans into space and restores the possibility of flying missions with crew to the moon or Mars.”

So, fingers crossed for Tuesday’s much-anticipated mission. And here’s hoping Musk won’t have to add it to his rocket booster bloopers video.

The launch window is between 1:30 p.m. and 4:30 p.m. ET on February 6. Check out the live feed for something truly spectacular. Because it will be, whatever happens.