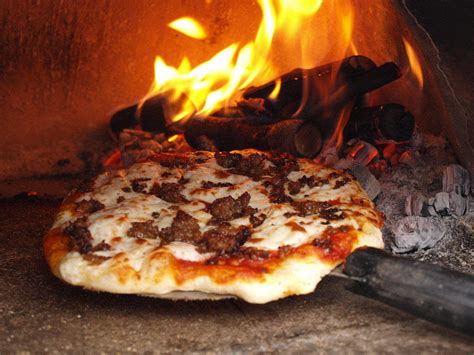 Science! It inspires wonder! It solves mysteries, and creates new ones! It is world-changing, mind-blowing, earth-is-definitely-round-proving stuff! And today, it has made plain what mouths have known for centuries: pizza just tastes really damn good when it comes out of a wood-fired brick oven.

This marvel of a story comes from Cosmos Magazine, and it has filled the staff of The Takeout with nerdy delight. (It has also made at least one of us hungry. That one is me.) Andrey Varlamov, a Russian physicist researching superconductivity at Consiglio Nazionale della Ricerche (CRN) in Rome, was having a friendly chat with his neighborhood pizza makers about oven temperature when he, like many great scientist before him, was struck with desire to know.

So he got some scientist buddies together (“materials scientist Andreas Glatz of the US Argonne National Laboratory, and Italian food anthropologist Sergio Grasso”) and using their amazing brains—and presumably some cool fancy equipment—they proved that yes, wood-fired brick ovens are the best. They also got to understand why. The secret: the balance of heat flowing into the crust and radiant heat warming those glorious toppings.

The local pizzaiolos divulged to Varlamov that the magic formula in the wood-fired oven was two minutes at 330 degrees Celsius. He calculated that in this scenario the temperature where the dough touched the bricks would be 210 degrees.

Varlamov then repeated the calculation for an electric oven, made of steel, and found that because of the higher thermal conductivity of the metal the temperature under the pizza would be much higher, around 300 degrees.

That is much higher. Or, as Varlamov charmingly wrote in his paper, “That is too much! The pizza will just turn to coal!”

Of course, the situation’s a lot more nuanced than that. I heartily recommend reading the Cosmos piece in full, and even taking a look at the pizza paper itself. Science is cool, and so is pizza.