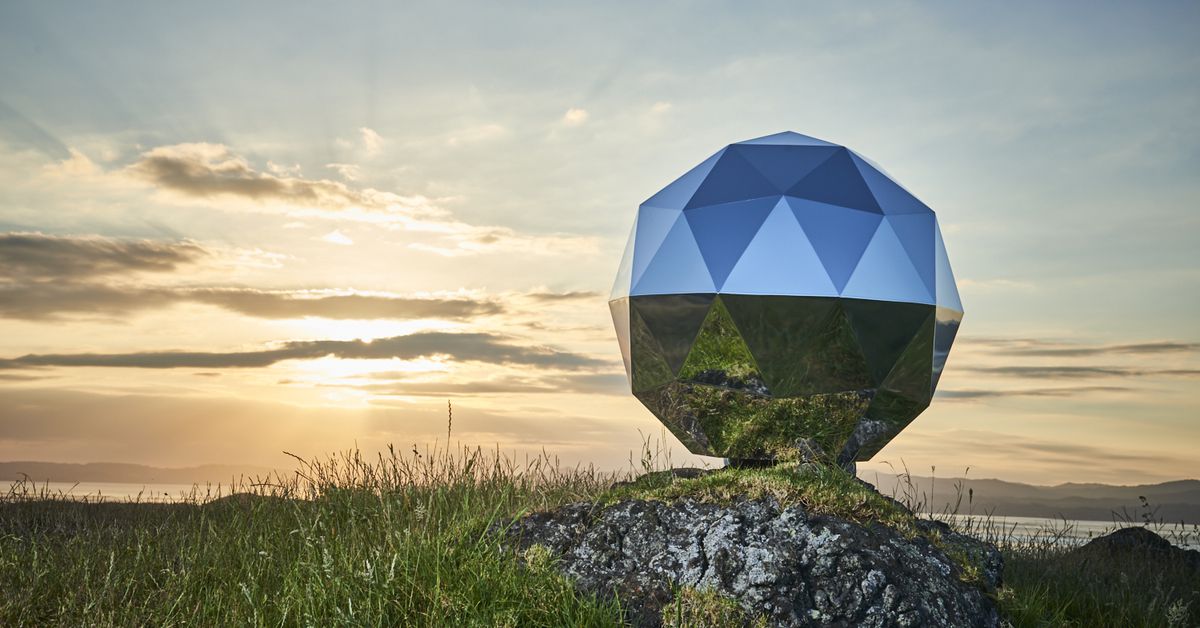 In January, US spaceflight startup Rocket Lab stealthily launched a small “disco ball” satellite into orbit as part of a cosmic art project aimed at inspiring people to come together and look up at the sky. But after just two months in space, the satellite — called the Humanity Star — has fallen back to Earth and burned up in the planet’s atmosphere. It brings a premature end to the probe’s life, which turned out to be more controversial than the company had hoped.

No satellite in lower Earth orbit lasts forever. Though objects in this region are technically in space, there’s still a very thin atmosphere as high as 300 miles up. So satellites in low orbits are constantly bombarded by small atmospheric particles that slowly nudge vehicles closer to Earth, until gravity snags them back to the planet. Satellites equipped with thrusters can correct for this effect as long as they have fuel. But eventually, they all must come down to burn up in the atmosphere.

The Humanity Star didn’t have thrusters, but its plunge wasn’t expected until nine months after launch, according to Rocket Lab. A couple days ago, satellite-tracking websites and even Rocket Lab’s own website showed that Humanity’s altitude was dropping fast, according to The Atlantic. So what gives? The company blames the premature end of the project on the satellite’s shape and weight. The Humanity Star is (or was) a three-foot-wide sphere comprised of 76 triangular panels, and it weighed just 18 pounds. That means it’s a small and lightweight satellite, with a large surface area. It’s a bit like a hollow ball, making it more susceptible to the atmosphere’s bombardment than a clunkier, heavier satellite.

A sphere is also a rare shape for a satellite, and that made it hard to predict its future, according to the company. “There’s not a whole lot of data out there about geodesic spheres and how long they’re supposed to [stay up] and what time frame they’re supposed to re-enter on their own,” Peter Beck, Rocket Lab’s CEO, tells The Verge. “So it’s always been tough to calculate.” Beck added that nine months was meant to be the maximum amount of time the Humanity Star could remain in orbit.

“The whole point of the project was to get people to look up.”

The company claimed that the sphere’s reflective panels made the satellite the brightest thing in the night sky, and people could go outside whenever the disco ball passed overhead to see it twinkle. Beck says the goal was to give people a similar experience to one he had as a kid when his dad took him outside to show him the stars, and he wondered if we were the only ones out there in the Universe. “The whole point of the project was to get people to look up, not just at the Humanity Star, but to look past the Humanity Star and have that moment I did,” he says.

But some astronomers saw the Humanity Star as something more sinister akin to light pollution or “space graffiti” — a bright object that served no purpose other than to mess up astronomy observations. During the night, astronomers try to capture very precise images of the night sky with large ground-based telescopes. Satellites travel super fast in orbit, so any time a probe goes through a telescope’s field of view, it can leave a long, bright streak through an image.

For no reason at all, here’s what it looks like when a satellite goes through Hubble’s field of view whilst you are trying to image something in the distant solar system. pic.twitter.com/eLWR1ncdqx

“The probability of that happening is low, but there are so many satellites out there and there are so many astronomers doing observations, it’s common to see streaks,” Andy Howell, an astronomer at Las Cumbres Observatory Global Telescope Network, tells The Verge. “I’m willing to take that hit if the satellites are useful, and we all need communications. But for a publicity stunt to get more attention, that’s the real annoying thing.” Beck says the satellite’s orbit was low enough on the horizon to minimize its impact. “We were certainly very careful about that, and about making it a short-term project,” he says.

Others weren’t happy about the “purpose” of the satellite. Rocket Lab’s intention was to inspire the awe and wonder of the night sky, but “that artificial thing in orbit doesn’t do it for me,” Meg Schwamb, an assistant scientist at Gemini Observatory, tells The Verge. “It might for others, but… should one person’s opinion dominate what we’re able to put into space? Is space really for art?”

It’s an interesting question, especially given the timing of the Humanity Star’s launch. The satellite went up just a month before SpaceX launched its Falcon Heavy rocket, putting a Tesla roadster into an orbit around the Sun. Granted, the car’s orbit makes it very unlikely that it will ever come close to Earth again, but its launch initiated a debate over whether or not wealthy CEOs can simply launch whatever they want in space, even if it serves no scientific or economic purpose.

“I was glad when disco died the first time. I’m happy to see it die again.”

Beck argues that Rocket Lab did go through all of the necessary US government approvals to launch the satellite. (The company is based in California.) And he says that despite the negativity, Rocket Lab received thousands of emails and messages from people who said they were inspired when they found the Humanity Star overhead. He also welcomes the negative points of view, too. “It got people talking about a number of issues, and the issue of commercialization of space and the ability for companies now to put things in orbit,” Beck says. “What we tried to achieve here was to create a discussion.”

But some astronomers won’t be shedding any tears over the Humanity Star’s end. “I was glad when disco died the first time. I’m happy to see it die again,” says Howell.