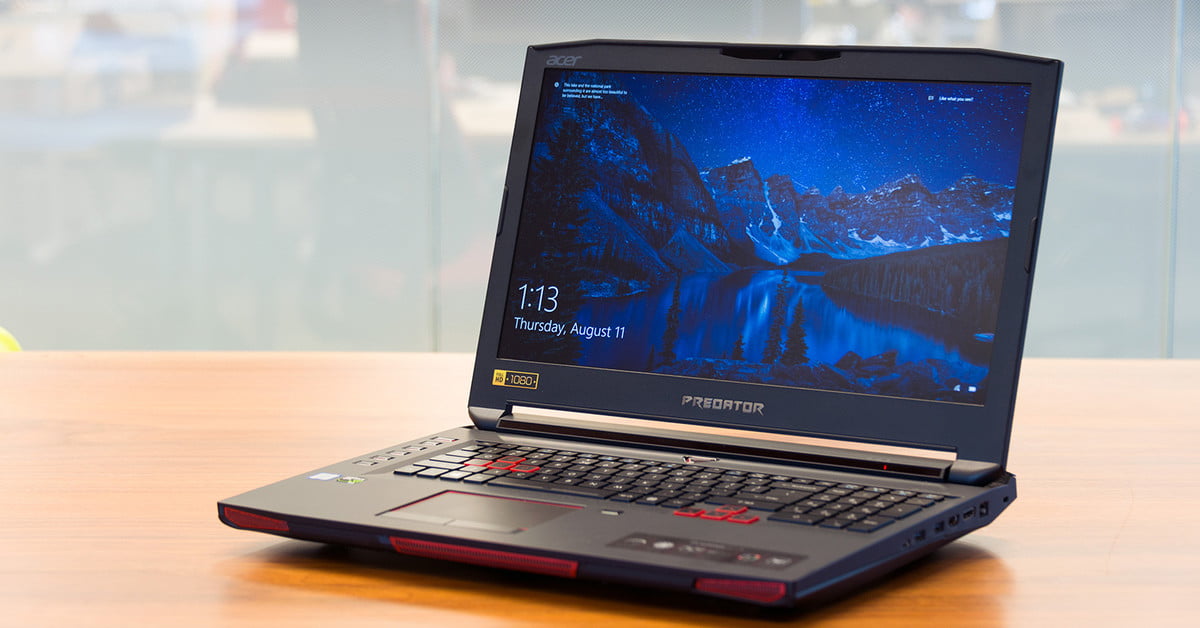 The Best Gaming Laptops in 2018

Desktop gaming will always be the pinnacle of the PC gaming experience, but gaming laptops have come a long way in the last couple of years. Some even rival their desktop counterparts in power, design, and affordability. Whether you’re looking for a serious gaming laptop or just a notebook that happens to have a discrete GPU, there are more options than ever out there.

So scroll down and join the growing ranks of laptop gaming adherents — here’s our list of the best gaming laptops on the market today.

Why should you buy this: You want to play the latest games at the highest settings while you’re on the go.

Who’s it for: Gamers who don’t mind spending a little extra to snag the best performance on the market.

What is the Predator 17  X doing right? Perhaps the better question is “what isn’t it doing right?” Its performance, powered by an Intel Core i7-7820HK, 32GB of RAM, and Nvidia GTX 1080 graphics, makes it one of the most powerful gaming laptops you can buy.

With a GTX 1080 graphics card and that monster of a processor, which is unlocked and overclock-ready, the Predator 17 X will make short work of just about anything you throw at it. Yes, even Destiny 2 — crank up those detail settings, Guardian.

It’s just what’s under the hood that counts. Acer has taken the time to rethink its Predator gaming series, and the new machines it introduced in 2017 are more impressive than ever. It does look a bit on the conventional side, but Acer supplements its stereotypical matte black and red with a sturdy, spacious layout that includes a full-sized numpad. It’s a more subdued look than the Asus G752, and one that’s sure to please the users who find the Asus too garish.

Those design improvements trickle down to the regular Acer Predator 17. Though it comes standard with only a Core i7-7700HQ and GTX 1070 graphics, it’s otherwise similar to the 17X. And, at a price that goes as low as $1,500 at some retailers, it’s a real bargain.

Why should you buy this: You want a gaming powerhouse with MacBook style.

Who’s it for: Gamers who need something small and light that can still pack a punch.

Why we picked the Razer Blade:

The Razer Blade offers serious gaming performance in a slim package. The newest version packs an 8th-gen Intel Core i7-8750H in with either an Nvidia GeForce GTX 1060 Max-Q or GTX 1070 Max-Q for graphics. You can still get the older, 14-inch model, but we recommend springing for the 2018 version.

The system bolsters its slim design with an attractive, matte black exterior. The result is a system that looks a lot like the black MacBooks of yore (that’s a compliment). With its slick design and impressive, Chroma-lit keyboard and touchpad, it stands out in the crowd. Even more impressive is the 144Hz 1080p display, which should ensure that framerates stay high.

Though it has many strengths, the Blade does fall victim to the limitations of its own footprint. Historically, they’ve run hotter and louder than competitors, and it’s not as powerful as a GTX 1080 GPU you find in some other laptops. The price is also high, starting at $1,900 for a model with a 256GB SSD and the 1080p display. If sleek and portable is what you’re looking for in a gaming laptop, the Razer Blade is one of your only good options. Why should you buy this: It’s the best gaming machine you can buy for less than $1,000.

Fast and affordable, the Dell Inspiron 15 Gaming is a solid do-it-all PC.

Who’s it for: Students, gamers, anyone who wants a gaming laptop but doesn’t want to break the bank.

Why we picked the Dell Inspiron 15 Gaming:

This budget-friendly laptop may not seem like a gaming powerhouse, but as one of the cheapest systems with a dedicated GPU, it can’t be ignored. It’s more modest than the other systems here, coming standard with an Intel Core i5-7300HQ and 8GB of RAM. The real star of the show is its graphics card, an Nvidia GeForce GTX 1060 graphics card with Max-Q design. During our tests it nearly kept up with more expensive and laptops like the Razer Blade. It doesn’t look quite as sharp, but it has more than enough horsepower to run the latest games at high detail settings.

Our review unit hit 65 frames per second while running Battlefield 1 on ultra at 1080p. The Razer Blade, which starts at $1,800, hit 67 FPS at ultra in Battlefield 1. Even running Deux Ex: Mankind Divided at ultra, the frame rate holds at around 37 FPS, a very playable score which rises considerably with the settings turned down a bit. Both games are easily playable at medium to high settings and 1080p resolution.

Unfortunately, the Inspiron 15 Gaming does look like a budget system. It’s a bit too thick, clad in an abundance of less-than-sturdy plastic. The screen’s bezel bends, as does the system’s touchpad.  All that extra plastic means it’s a bit bigger than it should be, even for a 15-inch gaming laptop. In addition, its display is one of the weakest we’ve tested in years, getting progressively worse than even in previous versions.

The good news is that Dell has rebooted the lineup, rebranded as the Dell G Series. Not only is the name easier to remember, the line will now offer configurations as cheap as $750, all with discrete GPUs. Once we get our hands on those, you can expect it to replace the Inspiron 15 Gaming on this list.

Why should you buy this: It’s a gaming laptop you can bring to work.

Stylish and slick, the Dell XPS 15 is a surprisingly robust gaming platform.

Who’s it for: Anyone who wants to be able to game on the go without carrying around a black-and-red behemoth.

Why we picked the Dell XPS 15:

The Dell XPS 15 might not seem like a gaming laptop, and to be fair it really isn’t one. But that’s the key of the category of “stealth gaming laptop,” which is becoming more and more possible. The XPS 15 is about to receive the 8th-gen treatment, so it now comes standard with a quad-core Core i5-8300H, or can be purchased with the six-core Core i7-8750H.

Plus, it starts at just $1,000, which undercuts most of the other laptops on this list, with the exception of the Dell Inspiron 15 7000 Gaming. While the new Dell XPS 15 2-in-1 makes a compelling effort to do something different with the keyboard and GPU, it’s price point isn’t low enough to make us want it over the XPS 15.

The best part is that it was recently updated in 2018, which is now available for purchase over at Dell. It comes at some new, high-powered configurations that feature a Core i9-8950HK and 4GB of GTX 1050Ti. That’s a whole lot of gaming and processing power for a laptop that looks as appropriate for a coffee shop as a MacBook Pro. The Dell XPS 15 is remarkably thin and light, despite carrying considerably more gaming hardware than an average work laptop.

When we test a laptop, particularly a gaming laptop, we leave no spec un-tested. Starting from look-and-feel and running all the way through individual hardware tests, laptops that enter our lab don’t leave until they’re put through their paces in every conceivable way.

On top of formal testing, we spend a lot of time with the laptops that come through out offices. We’ll use them for everyday work and web browsing, in hopes of catching any elusive issues that evaded our earlier testing. For more information on how we test laptops, you can read a full run-down over here.

What to expect out of a gaming laptop

Gaming laptops have come a long way in the last couple years. While some are still the big LED-clad behemoths we’ve come to know and love, it’s become easier and easier for manufacturers to cram some serious performance into small packages. Just look at the Razer Blade. It’s no bigger than other non-gaming laptops, but it’s able to deliver some seriously impressive performance.

That said, can you expect desktop-level performance out of a notebook? Well, almost. The best gaming laptops on the market come close, but there are a few areas that desktops still have an edge.

First up, desktop gaming rigs are bigger, so they’re more spacious inside. That extra space is important for heat diffusion. Even the most high-efficiency gaming laptop will still have some issues when it comes to heat accumulation. Inside a laptop’s chassis, everything is crammed together so tight there isn’t much manufacturers can do to reduce heat, other than just pump it out as fast as possible.

Similarly, gaming desktops will almost always have better processors because they don’t need to worry about battery life or the aforementioned heat issue. They can suck down as much power as they need to run those 4.0GHz octa-core processors without batting an eye. In the process, they’ll generate a massive amount of heat which is easily dispersed with air cooling.

So, when it comes to performance, a great gaming laptop will come close to a desktop gaming experience in all but those areas. It’s going to run hotter, and it’s going to run a little slower. The desktop is faster, but if you only want a laptop, you can make it work.