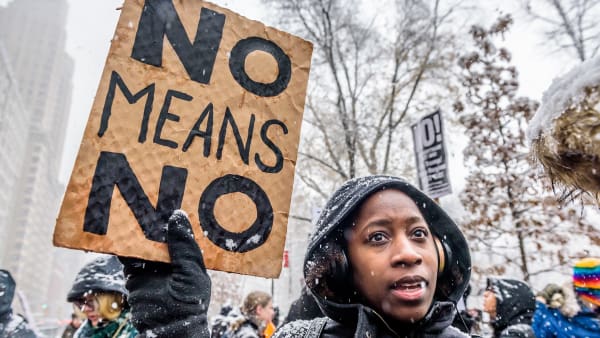 No one should have to deal with sexual harassment, but if 2017 taught us one thing, it’s that for many women in particular, it’s their reality. But the impact of sexual harassment extends far beyond the confines of the workplace (or anywhere else it occurs) — it also has major effects on your mental health.

Whether you’re able to report or call out the harasser, the fact that someone demeaned you in that capacity can be truly detrimental and among other things make you question your worth as an employee or person. Even if the perpetrator has been reprimanded, that doesn’t automatically undo the damage potentially caused to your mental health or make you any less anxious in other workplace scenarios.

So before you dismiss someone who has been sexually harassed or wonder why they’re not “over it,” let’s take a look at some of the effects of sexual harassment and how we can deal with them.

Up until very recently, when we heard the term “sexual harassment,” the first thing that came to mind for many people were public service announcements from the 1980s or a painfully outdated training video you had to watch during orientation at a new job.

But it’s far from just being a pop-culture punchline. Sexual harassment is a very real problem for a lot of people. According to a study conducted by Comparably, 1 in 4 women have been sexually harassed in the workplace, with a higher rate (33 percent) reported by women in the tech industry. Black and Hispanic/Latinx workers reported the highest rates of sexual harassment based on demographic, at 19 percent and 17 percent, respectively.

More: What’s Normal — & Not Normal — During a Massage?

One thing to keep in mind when considering the relationship between the abuser and victim is that sexual harassment is generally not about sex, Dr. Fran Walfish, Beverly Hills family and relationship psychotherapist, author of The Self-Aware Parent and costar on Sex Box on WE tv tells SheKnows. Rather, it’s about control and power — overpowering a weaker person in order to validate and “puff up one’s own grandiosity,” she adds.

“Many people, especially men, in positions of power are feared and revered and feel a sense of entitlement,” Walfish explains. “They expect to get what they want now and are not accustomed to hearing the word no. Many of the sexually abusive men are unconsciously — without awareness — dealing with fear of their own mortality.”

Similarly, Dr. Judi Cinéas, a psychotherapist practicing in Florida and New York for nearly two decades, has seen firsthand what sexual harassment can do to someone in both the short- and long-term — at the very least, creating an uncomfortable work environment for the person being harassed.

“These situations can cause the person to experience a great deal of anxiety, particularly when it comes to being in an environment that causes them to have to be near or interact with the perpetrator,” she explains.

Walfish says that “anxiety is psychology’s fancy word for ‘very scared,’” and that it’s frightening to be controlled and overpowered by another person.

This work-related anxiety can then spill into the person’s personal life and in many cases cause depression, Cinéas adds. The risk and intensity of depression can be magnified the longer the person is subjected to the harassment or is unable to disclose and have the issue addressed, as well as in cases with especially aggressive perpetrators, she says.

“The depression reaction to sexual abuse comes from an overwhelming combination of powerlessness, helplessness and unexpressed angry rage,” Walfish explains. “The victim has not had the liberty of verbalizing direct anger toward the aggressor, so frequently she implodes these powerful feelings inward.”

These effects could cause the victims to have additional sexual or relationship issues of their own stemming from the trauma caused by the perpetrator’s actions, according to Cinéas, as well as issues of with confidence and self-esteem and experiencing extreme feelings of guilt.

More: Our Narrow View of Sexual Assault Is Letting People Get Away With It

There’s also the fact that many people don’t feel as though they’re in a position to report sexual harassment at work out of fear that they’ll lose their jobs or that doing so would make their lives more difficult in the workplace.

“Workplace sexual harassment can be trickier for patients to process because they fear for their jobs and for future jobs related to the type of recommendation they will receive,” Walfish says. “Sometimes, they feel forced to put a muzzle on their mouths and swallow it for the sake of paying rent. This is very tricky therapeutically because they feel trapped with nowhere to go with their rage and fury but inward.”

What can we do about it?

Naturally, the ideal first course of action is to report the abuser, but as we’ve already discussed, in many cases, that’s easier said than done. If the person is not able to speak up directly, the next best step is to gather resources that can help them, Cinéas explains. This would include others within the hierarchy of the workplace who can assist them in getting the issue addressed, including supervisors and human resources representatives.

“Whether the person is ready to seek help or is still working on figuring out their plan, it is important to document everything,” Cinéas says. “The more irrefutable the documentation, the better.”

And rather than relying on vintage videos, workplaces would ideally take more proactive steps to train management. Jennifer Hancock of Humanist Learning Systems teaches seminars on how to stop harassment using behavioral psychology and says part of that involves how to train an abuser to stop. In general, she tells SheKnows, you want to remove the reward and increase the cost, which will trigger an escalation known formally as an “extinction burst,” but more commonly thought of as retaliation.

“The challenge is for individuals experiencing this to figure out how the other person is being rewarded,” Hancock says. “It may not be from the victim. It may be status with others that is gained. People need to deny the reward, document what is happening and be consistent. This is key. Without consistency, things just escalate and don’t get better. With consistency, they escalate and then blow out and then stop. Usually, the person gets fired.”

As we’ve already established, it’s not feasible or realistic to expect everyone who has been sexually harassed at work to go public about it or even report it given that it could jeopardize their job and financial security. But in this current #MeToo climate, the momentum behind the movement is not just inspirational; it can also be affirming for others who have experienced that type of harassment.

Because those who experience sexual harassment or assault are still so frequently blamed and held accountable, they end up feeling either that they brought it on or somehow could have prevented it, Walfish notes, adding that this is “simply not true.” She says that all the high-profile cases of sexual harassment — like the many made against Harvey Weinstein — can help make other victims feel less alone, isolated and stigmatized.

More: Harvey Weinstein’s Alleged Sex Crimes Brought Back Memories of My Own Harassment

Lastly, Cinéas stresses the importance for people to remember to trust their instincts. Perpetrators of sexual harassment typically don’t start with their most aggressive tactics, she says. Like many other types of abusers, they can start with a somewhat ambiguous comment or action that may make the person uncomfortable, but also remain unclear what it really was or what it meant, causing the victim to brush off the incident, Cinéas adds.

“If your gut tells you something is wrong, at the very least start documenting,” she advises. “If you are concerned about the impact reporting can have on your job or future opportunities, document outside of work until you have enough information to confidently report the harassment.”

Additionally, if your company offers an employee assistance program, you may be able to see a counselor about the issue and that appointment can also serve as a source of documentation. Of course, if the perpetrator has engaged in behavior that is overtly illegal, such as a physical attack, you should engage law enforcement. If you need to, engage the assistance of an attorney.

“Regardless of what course of action a person is ready to take or not take at the moment, self-care is imperative in keeping you strong enough to deal with the issue as you see fit,” Cinéas says.

Against the background of uncertainty and stress, which have fallen in full during the pandemic, taking care of yourself and your own well-being has...

Pants and jeans are in the closet of each of us, and for the cold season, more practical clothes cannot be found. But how...