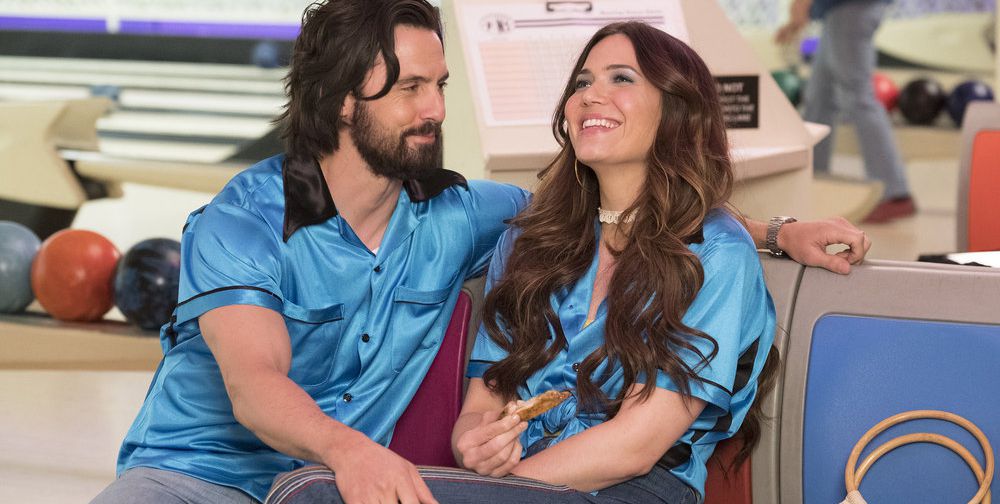 I was initially thrilled when it became clear that tonight’s episode of This Is Us would contain flashbacks showing Jack alive, well, and happy. But with the initial grief of his loss waning, I think I might have some residual anger with him for dying.

The Jack-isms of this episode seemed annoying, and I found myself wishing the entire episode was just Randall, Beth, Kevin, Kate, and Toby in Vegas for some pretty low-energy bachelor/bachelorette parties. The writing wasn’t different, and he wasn’t any less perfect than usual. It’s more that I now know where his perfection leads him, and it leaves me melancholy and anxious. WHY DID YOU HAVE TO GO BACK INTO THAT HOUSE, JACK?

Anyway, here are all the thoughts I had while watching this week’s episode, “Vegas, Baby.”

1. I actually don’t blame Rebecca for being exhausted by Jack’s grand gestures. We were only shown two of his wedding anniversary gifts—a slow dance in the middle of a bowling lane and a gorgeous piano with a giant red bow—and even those stressed me out. “Patrick Swayze’s not going to pop out of our closet, is he?” she asks. Jack promises no grand gestures are coming and that the kids will be in bed by 8:30. I have zero faith in him.

2. Deja is NOT back. She comes to Beth and Randall for money because they’re short for the heating bill and they need to pay it before her social worker visits. He tells her to call them any time and not wait until the heat goes off. Weeks later, Beth’s hair is out of braids and she’s stoked to go to Vegas, but Randall is still concerned about Deja.

3. “We are wildly codependent.” Truer words have not come out of Toby’s mouth. Kate and Toby are planning their bachelorette and bachelor parties and realize they have very few friends apart from each other. Madison’s been helping Kate plan and Toby hates her because she keeps giving them nicknames like “Mike and Molly” and “Toby Bryant”…actually, he likes that one. We learn Kate has pretty much no relationship with Beth; Toby’s brother couldn’t make it. (I’m also disturbed by the belly rub moment between Toby and Kate that I’m sure was supposed to be cute.)

4. Kevin wants to throw a big party for Rebecca with Randall and Kate because Jack isn’t doing anything for the anniversary. Jack’s stoked because it’s the loophole he needed. I knew he was a liar.

5. Beth needed this bachelor/bachelorette trip so bad. She’s thrilled about it, but Randall keeps killing her vibe. She calls it a Deja-free zone. “I guess I can’t detach like you can,” is not the best response Randall could have had. He also says, “You’re the head, I’m the heart.” Not Randall at his smoothest.

6. “Your hair is always different and I am obsessed.” Madison tells Beth as they’re pre-gaming the Bachelorette party. She says the weirdest things, and knows how to make any situation uncomfortable. It’s a gift!

7. Young Kevin wants to make Cornish hens because he remembers his mom mentioning wanting to try them. Meanwhile, Randall and Kate are at the library looking for something that I’m sure will help them plan the perfect anniversary date for their parents. It’s really sweet seeing Randall through Kate’s eyes, instead of the nerdy nobody that young Kevin sees.

8. At the bachelor party dinner, Kevin spots a co-star from his latest movie. When he tells her the movie has kept him going through this hard time, she reveals they cut her out of the movie completely. Kevin’s character had most of his scenes with her—this does not bode well.

9. Meanwhile, Deja called Randall, because Bill Nye was on TV and she thought of him. Oh wait, that seems like a lie, because she also lied about being home. BUT IT WAS STILL A CUTE THING TO SAY. Both Kevin and Randall cut out of the bachelor party, which is so rude. “You don’t need your brother-in-law weighing you down,” says Randall. I can’t believe I actually feel bad for Toby.

10. Of course Kevin, Randall, and Kate’s fabulous dinner becomes more work for Rebecca than anyone else.

11. STOP FIGHTING, RANDALL AND BETH. STAHP. Just when I thought we were being given a low-ball episode, you know, maybe some time to collect ourselves following the last two monster episodes, we get this blow-up. “I sit inside your anxiety every damn minute of every damn day,” Beth exclaims when Randall interrupts the bachelorette party over a hunch that Deja might not be okay. Randall’s heart is clearly in the right place, but I can physically feel Beth’s stress and it’s shocking that he can’t see it.

But that’s not the biggest gut-punch. Beth goes off at Kate, too. “This is not a Big Three moment,” she yells when Kate tries to intervene. “Randall has made it perfectly clear who’s more important to him,” Kate responds, before leaving her own party. A heartbreaking moment for sisters everywhere.

12. Young Kevin gets upset because his dinner gets ruined after Jack forgets to turn the oven on. He cries and tells his parents that he thinks they’re getting divorced because they didn’t want to celebrate their anniversary. Sweet kid.

13. This brother-sister moment between Kate and Randall killed me. Kate prides herself on being the first one to realize he was the coolest person in the world. “Everyone thinks it was Kate and Kevin, but after dad’s death, it was Randall and Kate watching mom pretend to be okay and binging Sex and the City.” Randall says, “I was a straight black teenager. Do you really think I loved Sex and the City that much? I watched because I knew you loved it.” I’m not crying, YOU’RE CRYING.

14. Rebecca missed giving Jack a gift, even though she thinks it still wouldn’t have been as good as the one he would have given her. She apologizes for de-Jacking him. When they get to their room, though, the kids set up an elaborate light show and make them go up on the roof to watch a meteor shower. “You did it, babe—you created mini yous.” Yes, he did.

15. Kate shows up to Beth’s room and they share a very cathartic moment. While it’s sad to realize they have pretty much no relationship, I’m so happy Beth was able to talk to someone about her heartbreak over Deja. I JUST WANT BETH TO BE HAPPY ALL THE TIME.

16. What is with this episode trying to change my mind about Toby? “I was excited to get a chance at two more brothers.” While these may be the lamest bachelor and bachelorette parties in the history of the world, they managed to heavily shift my feelings about Toby and Kate as people. Also, Toby speaks the truth again: “If you, Randall Pearson, are beating yourself up about anything, then the rest of us should throw ourselves in front of a train.”

17. “You are my daily meteor shower.” Whatever. I think Jack’s lines aren’t working on me anymore because I’m mad at him for being dead.

18. “A big grand gesture is not about the thing that you do. It’s not about what you say. It’s about intent—it’s about taking the time to say I hear you, I see you, I know exactly what you need right now, and I’m showing how important that is to me.” WE CAN ALL BE JACK, NOW.

19. Happy endings for all. Jack and Rebecca got their fairytale anniversary, Randall and Beth make up, and Kevin is NOT cut from his movie.

20. Randall promises to move on from Deja, but Beth decides she gets to be the heart for once. They go looking for Deja and find her living in a car. Looks like they have work to do.