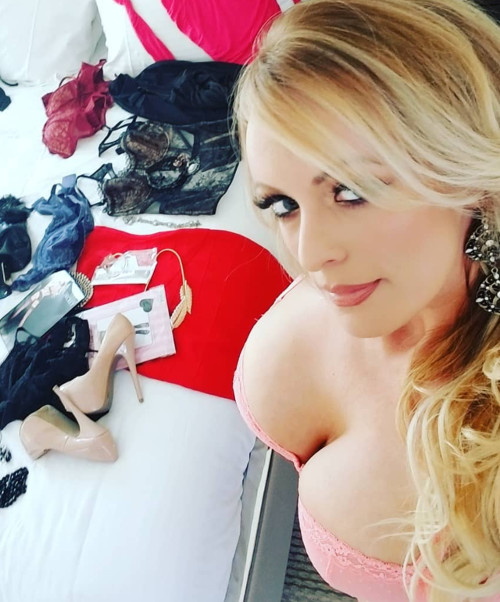 Poor Michael Cohen. He likely fucked up big time at work by botching the his assignment to shut down President Donald Trump‘s alleged ex-side piece, Stormy Daniels, with an NDA. I’m sure it’s not entirely his fault, his asshole of a boss probably didn’t give him the tools (poor Michael was scrounging around the backseat of his Subaru looking for loose change for that payout) or the authority (Donny didn’t sign, Michael should have told him it was an “autograph“) he needed to get an airtight NDA out of Stormy (stage name), aka Stephanie Clifford (government name), aka Peggy Peterson (pseudonym) aka Whatever Fucked Up Sex Time Name Donald Had For Her I Don’t Even Want To Know (pet name).

As we learned yesterday, Stormy’s taken the opportunity to sue Trump because she believes the NDA she signed is invalid. She’s got a song to sing and it’s probably rated E for explicit. Now NBC News reports that Michael Cohen filed a “secret” restraining order linked to a “private arbitration proceeding” and has been harassing and threatening Stormy with penalties if she discusses her biznasty with the president. To which Stormy’s attorney Michael Avenatti is calling bullshit. According to NBC:

Tuesday’s lawsuit says that Trump attorney Michael Cohen — who brokered the agreement with Clifford during the presidential campaign — attempted to “intimidate” Clifford and “shut her up” by initiating what it calls a “bogus arbitration proceeding” against her in Los Angeles on Feb. 27.

On that day, Cohen obtained a temporary restraining order against Clifford from the private arbitrator, a retired judge, which bars her from disclosing “confidential information” related to the nondisclosure agreement signed in October 2016, according to a copy of the order obtained by NBC News.

Apparently on Feb. 28th, Michael C. emailed this dubious temporary restraining order to Stormy’s former attorney (Dammit, Michael! can’t you do anything right?) noting that “The document itself is to remain confidential and not to be disclosed to anyone as per the terms of the judge’s order“. Eventually it got delivered to the right lawyer, probably with a Ziggy cartoon attached. Avenatti the Hottie (I’m gonna call him this since there is already a Michael) had the following to say about the move:

“Earlier today, Mr. Cohen through his attorney, Mr. Rosen, further threatened my client in an effort to prevent her from telling the truth about what really happened,” Avenatti said. “We do not take kindly to these threats, nor we will be intimidated.”

Don’t sleep on Avenatti the Hottie! He’s not here for games. Lawrence Rosen however (that’s Michael Cohen’s lawyer who also used to represent Trump) claims that there was a clause in the original NDA that allowed for an injunction “in the event of a breach or threatened breach of the agreement“. According to Rosen, that’s lawyer talk for “life is a meaningless void“.

“The designated judge from the arbitration tribunal found that Ms. Clifford had violated the agreement and enjoined her from, among other things, filing this lawsuit,” Rosen said in the statement.

You know what this story needs, more lawyers! Sarah Sanders isn’t one but she plays one on TV, so close enough for the Trump administration. Sarah says that Trump denies “all of these allegations” meaning he don’t know her and he don’t know nuthin’ about nuthin’. But then Sarah kind of stuck her foot in it by saying, “I have had conversations with the president about this and as I outlined earlier, this case had already been won in arbitration,” meaning he did know something for somebody who supposedly isn’t involved in the slightest. When asked about this comment, Avenatti the Hottie won the White House Rap Battle with the line, “Yeah, and he won the popular vote, too“.

Stay tuned for the next installment of Make It Stop Theater which is probably already streaming on Twitter right now.