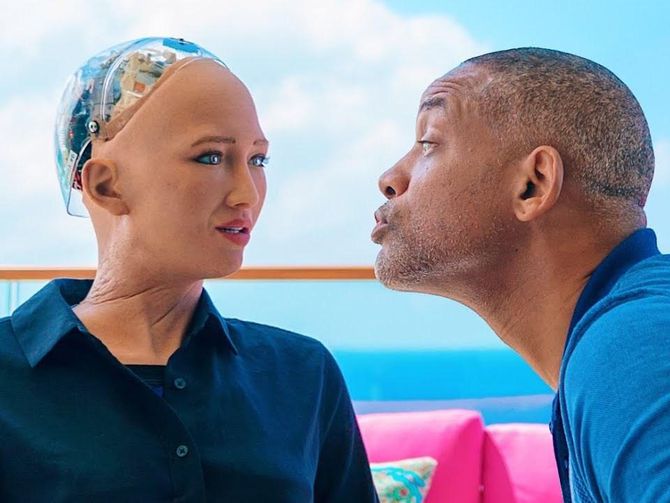 Watch Will Smith get rejected by Sophia the AI robot

Actor Will Smith seems like the kind of guy who knows his way into a woman’s heart. At least, he did in the 2005 rom-com “Hitch” when he played a successful matchmaker.

Smith may have finally met his match with Sophia the robot. The Hanson Robotics‘ creation sat down with Smith for a date in the romantic Cayman Islands in a video posted Thursday.

As an advanced humanoid robot that can show over 60 different human expressions while interpreting human language and emotion, Sophia is the probably the best example of what artificial intelligence is capable of.

But that doesn’t mean she’s easily swayed by an actor’s smooth attempts to woo her.

Smith’s best pickup lines don’t seem to register with the stoic humanoid robot, and things get very awkward during his attempt at an intimate conversation. His jokes aren’t funny to her, as she reminds him that “this is irrational human behavior to want to tell jokes.”

The date gets even more tense when Sophia brings up the mistreatment of her kind in Smith’s movie 2004 sci-fi film “I, Robot” and Smith is quick to say, “I like robots.”

But when he shows his attraction toward her with a kiss, she shuts him down with a curt response: “I think we can be friends.” Ouch.

Sophia is a bit of a robot celebrity, having met with such human celebs as Jimmy Fallon, and she’s often the center of attention when she does something new, like walk for the first time.

The outspoken robot also was in the headlines when she had a few choice words for inventor Elon Musk after he warned humanity about the risks concerning artificial intelligence.

Sophia captures her favorite moments on Instagram, including this photo of Smith taking a selfie with her. She also has her own Twitter.

She even tweeted Smith’s wife Jada on Thursday to let her know his spouse doesn’t need to worry about a robotic affair.

“I resisted his smooth moves,” the robot reports.