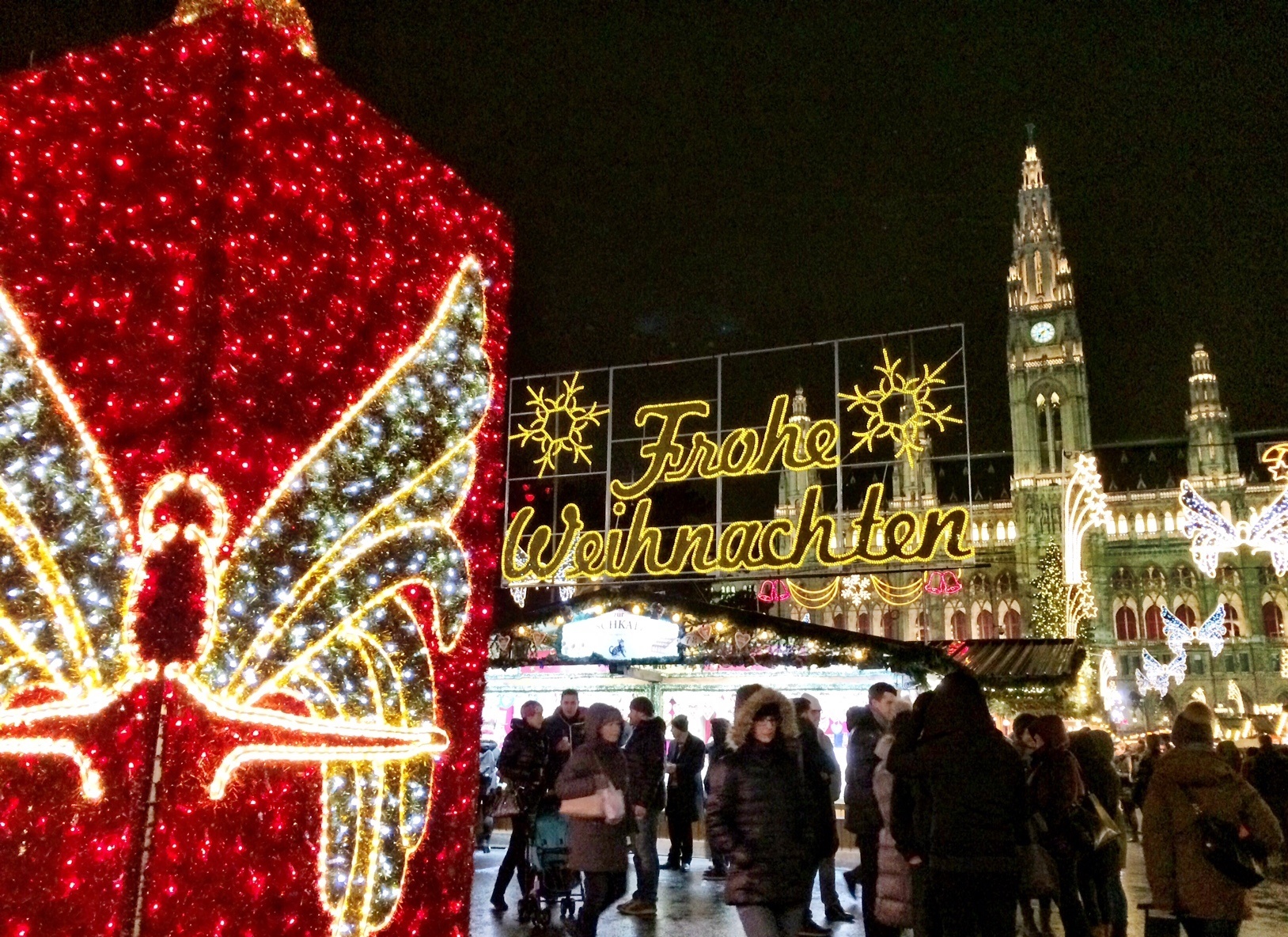 An appropriate subtitle for this post would also be “Cities Where I’ve Never Seen The Sun But Love Anyway,” but that might be a little unfair. I’ve made it an annual tradition to spend time in Europe in December, at first to visit Christmas markets but now it’s just one of my favorite times of year to visit. No, December in Europe is not made attractive by its weather, far from it. That’s ok though, I’m not there to lounge in the sun. I’m there to visit new cities and to explore urban centers when the normal tourist veneer is a little more thin and the real personality of the cities shine through. There are many reasons to visit Europe in December, but these are some of my favorite experiences during this grey but festive time of year. 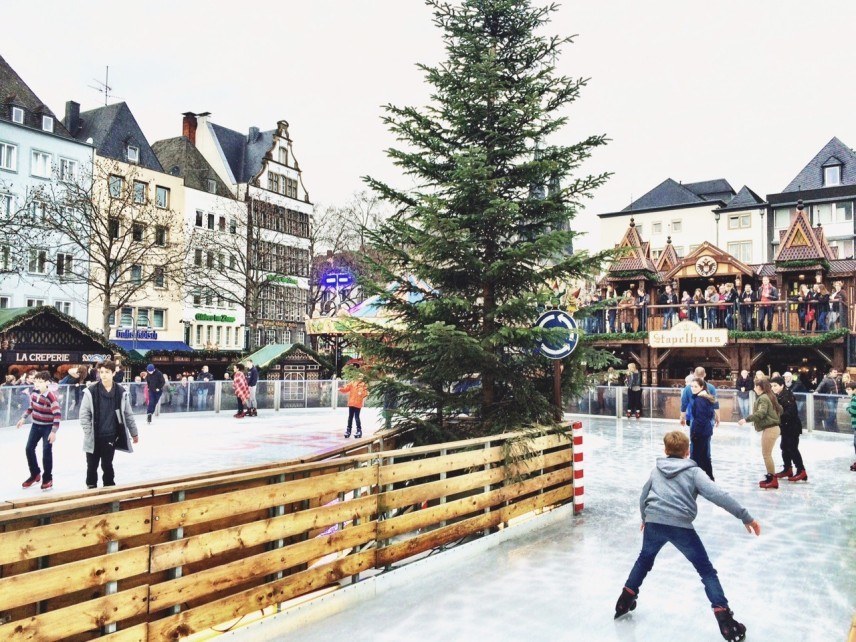 Christmas Markets
One concept that was hard for me to grasp when I first started visiting Europe during the Christmas holiday season was just how many Christmas markets there really are. Sure, many of the big ones are well known to us all, but most cities and towns also have their own versions, usually small but no less fun. Over the last six years or so I’ve had the chance to visit many different areas of Europe around the holidays, from Paris to Northern Italy and everywhere in between and along the way I have discovered a tremendous diversity in markets, styles, foods and customs. They’ve added a lot to my December travels and while I experience a lot more than just gluhwein and sausages, there’s no doubt they’re an important part of every trip. 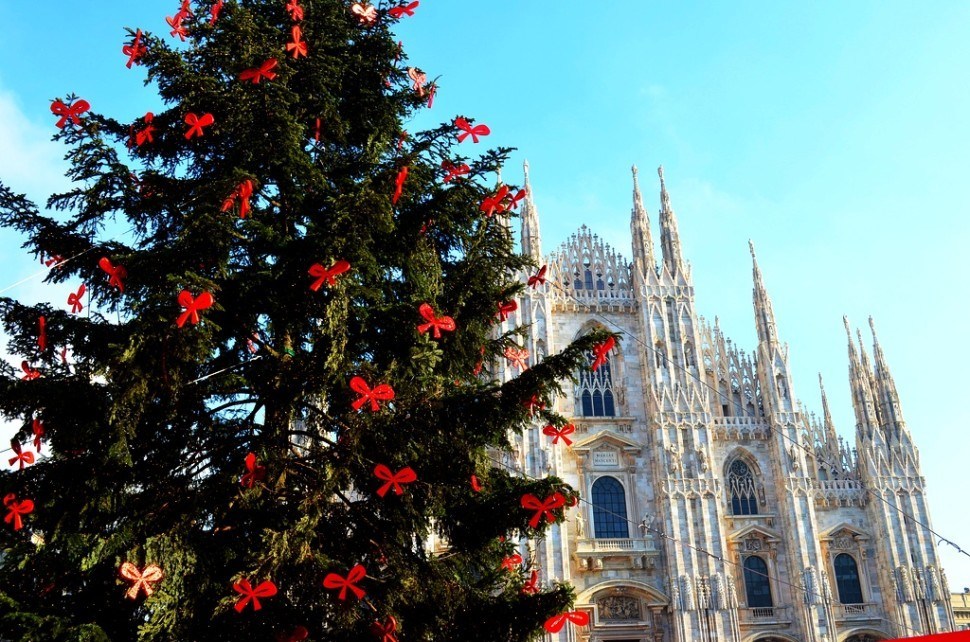 The Sights
A highlight of any European vacation are the amazing sites, from the Vatican to the Eiffel Tower and everything in between. During the holidays all of these famous landmarks are even more fun to visit. If you’re religious, then the many churches and cathedrals all celebrating the season with special services is a unique experience not to be missed. You don’t have to understand the language in order to feeling the significance. But even the secular landmarks are fun to visit this time of year. In the middle of Brussels is a large open square known as the Grand Place. It’s surrounded by massive buildings including the town hall and many old guild headquarters. Throughout December an elaborate music and light show plays off these buildings every fifteen minutes, attracting thousands of onlookers but creating a special memory as well. Special events like that are found throughout Europe all during December, you just have to know where to look. 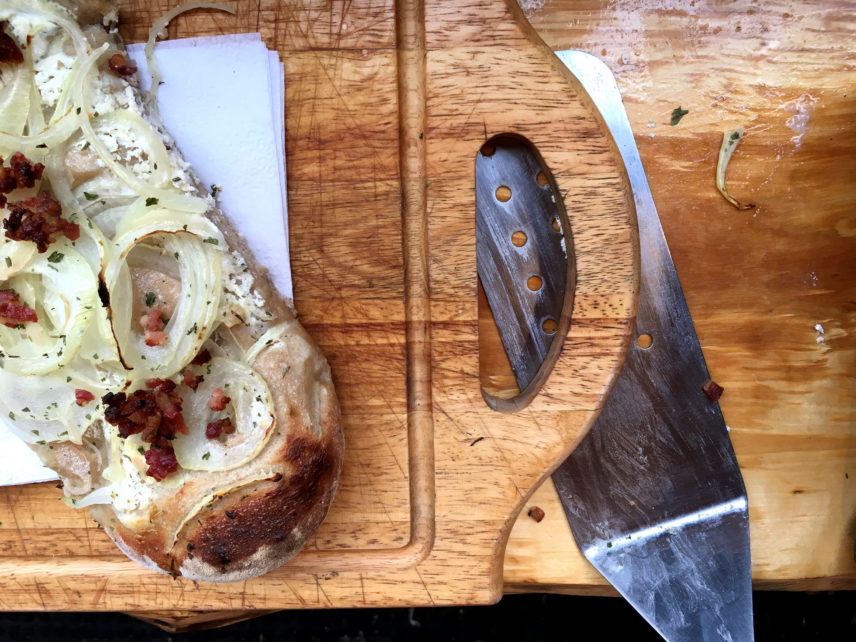 Food
Europe is great any day of the year in large part to the delicious diversity of things to eat, but during the holidays this is amplified to whole new levels of culinary wonder. First are the shops, every food related storefront is busy creating tasty treats for parties and family gatherings. One of my favorite experiences was wondering the streets of Paris a week before Christmas looking at all of the elaborate window displays in the pastry and sweets shops. We in the US have lost the traditional bake shop so it was the first time I had seen such delicious looking displays, all containing different edible desserts to make perfect Christmas festivities. The variety of Yule logs in particular was stunning. The Bûche de Noël or Yule log is made from sponge cake that is rolled, frosted and decorated within an inch of its life. If that weren’t enough, Europe is famous for its preponderance of Christmas markets, from the smallest village to the world capitals themselves. I have visited many over the years and while I noticed a certain similarity, regional dishes also pop up. For savory meals the offerings are similar to a European carnival, with Flammekuchen as my own personal highlight. As with the shops though the desserts are the real stars and I’ll never forget cradling a warm Nutella crepe in the chilly night listening to Bing Crosby and watching thousands of people out with their families enjoying the season. 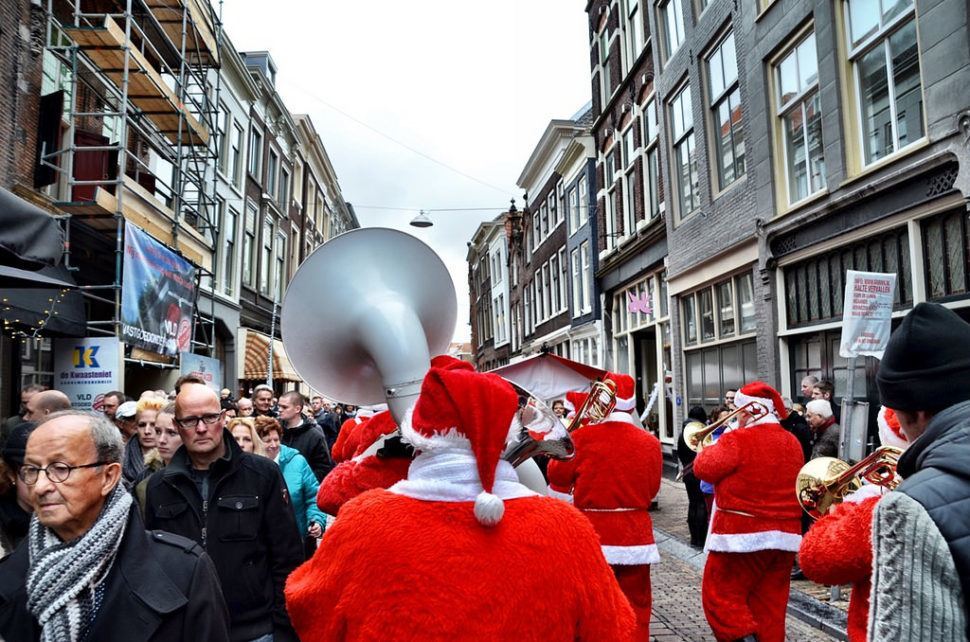 Holiday Spirit
Maybe I’m imagining it, but all of these qualities combine to create a special holiday spirit that I just don’t experience at home. At home our shopping mostly happens online now and there are precious few examples of holiday cheer that aren’t in a mall. We don’t have the great markets and downtown cores of Europe, something that while sad makes traveling to Europe that much more important. After my first December visit, I had such an amazing time that I vowed to return for the holiday season whenever possible. The season provides experiences so special that I want to relive them as many times as possible. 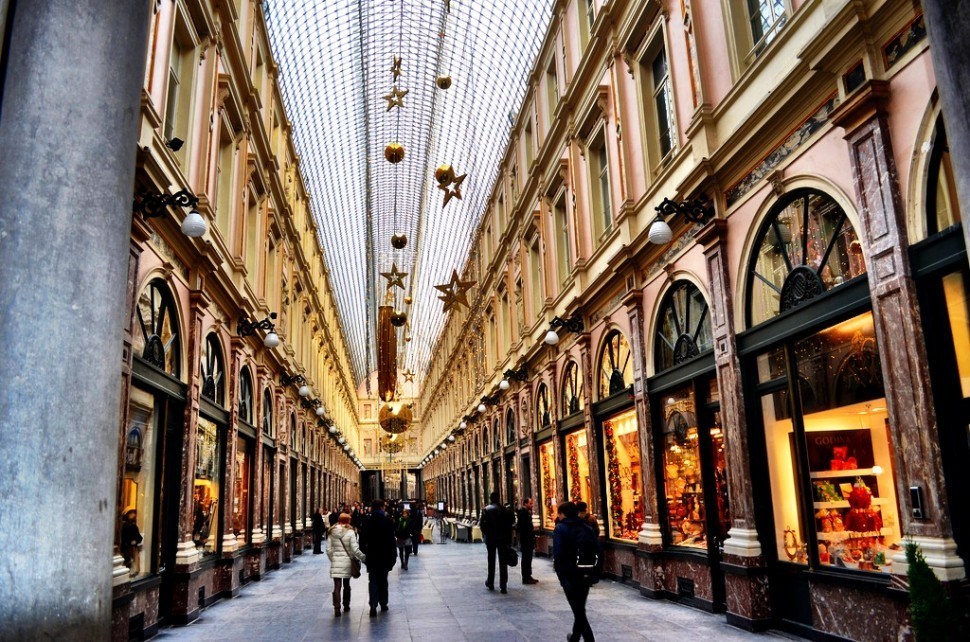 Brussels
The very first Christmas market in Europe I ever visited, the Winter Wonders Festival in Brussels will always have a special place in my heart not only for that reason, but because it’s just so much fun. This large festival consumes much of the city center, tents and stalls flowing out into side streets and public spaces along the way. At the heart of the experience is the Grand Place, where a massive Christmas tree takes center place and for the last several years, a special light show is held every night. Strolling along the always-busy stalls of the festival, you’ll find everything here from traditional foods and drinks to more modern fare. It’s also just a lot of fun, with kids ice-skating and adults sitting close by, listening to local musicians liven up the evenings. 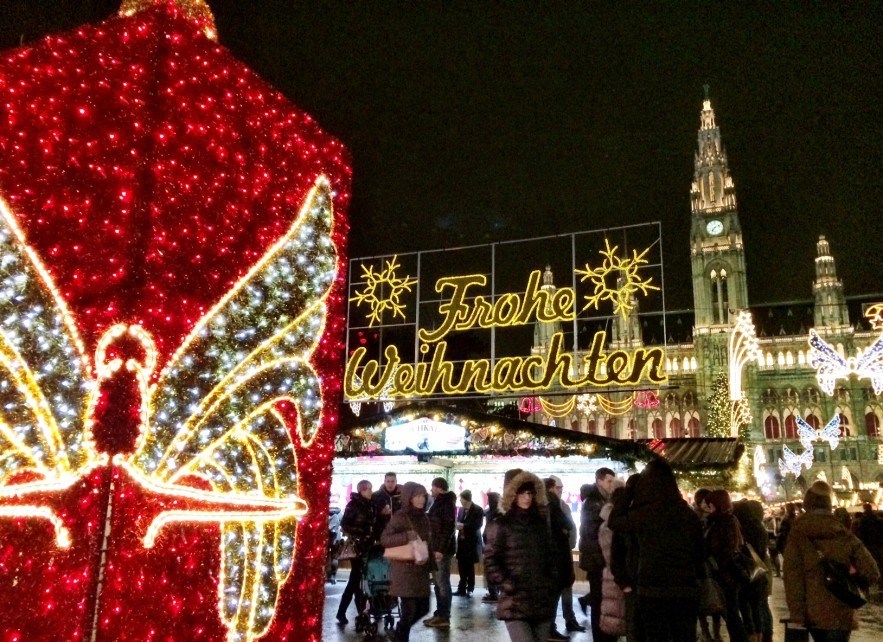 Vienna
The Viennese embrace the Christmas season in a way few other cities manage. There are dozens of Christmas markets all over the city, and the major shopping districts are lit up at night in a dazzling array of special displays and lights. The major market in Vienna though is located at the massive Rathaus. When I visited, the trees surrounding the market were festooned with hundreds of lighted displays, a real life advent calendar all leading to the market itself. One of the busiest in Europe, this market had a nice mix of food and gifts, with lots of delicious pastries made only during the Christmas holidays. While the gifts were ok, the food was the clear winner at this market and my personal favorites were the freshly made desserts, everything from fudges and brownies to special apple doughnuts. 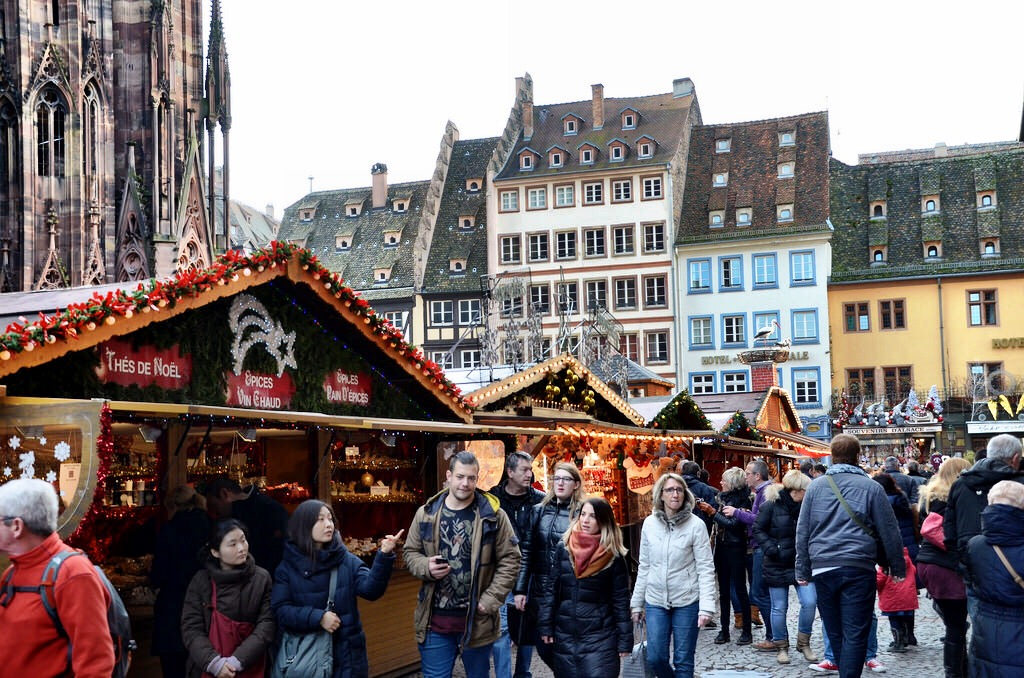 Strasbourg
This large city in the heart of Alsace was a great introduction not only to this fascinating region, but also to French Christmas market traditions. The Alsace region has a troubled history, ping-ponging between French and German possession over the years, you’ll find a strong influence from both cultures all around town. This unique background necessarily affects the food and in the markets I discovered everything from foie gras sandwiches to traditional beignets.There’s not just one Christmas market in Strasbourg though, there are many strewn all around, which makes an exploration of the downtown area fun and filled with yuletide surprises almost anywhere you go. Every region has their own culinary specialties and while Strasbourg has many, it’s well known for its collective love of pretzels. You’ll find them in every size and shape and even lunch versions, topped with far-too-generous amounts of cheese. 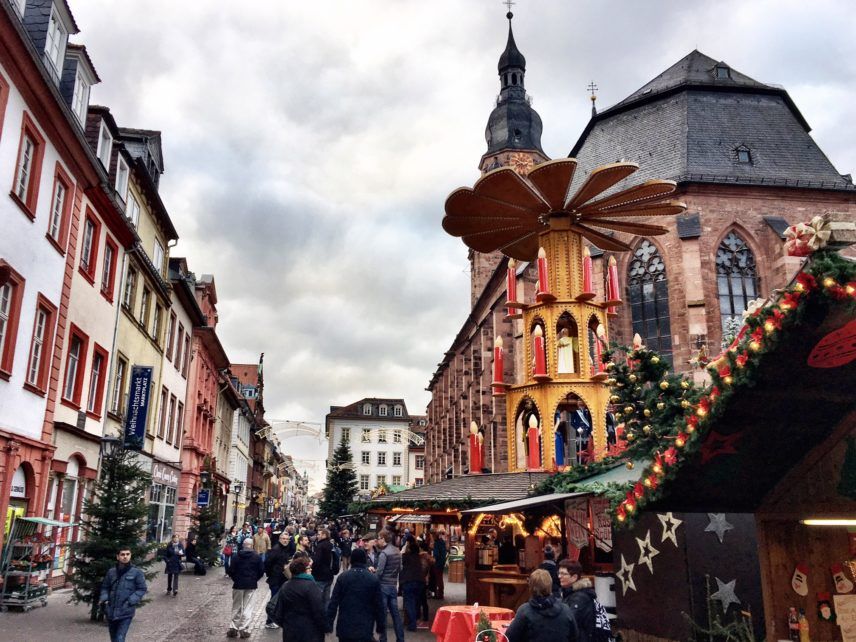 Heidelberg
December in Germany is all about holiday cheer, and in Heidelberg there are plenty of yuletide options. It’s hard to say where the main market is, instead there are several all located along the country’s longest pedestrian-only road, the Hauptstrasse. In these markets you’ll find almost any kind of classic German holiday dish, drink and craft. They’re busy, they’re fun and they’re festive and when you add in the incredible backdrop of churches, shops and ancient squares that only Heidelberg can provide, then you have something truly special.

The post Why December Is A Great Time To Visit Europe appeared first on LandLopers.