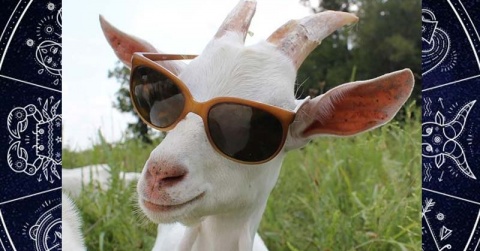 “2018 is gonna be my year,” said everyone who’s completely given up on the catastrophe that 2017 has been. I, for one, have decide to simply eat and hibernate until the New Year — I’m in my country home town for the holidays, so no one will notice I haven’t showered in days. But let’s continue to look positively to future. Here are some predictions for the signs based on my mild interest in astrology, so you know they’ll come true!

You are a naturally a strong-willed leader, and you’re not afraid to go for what you want. But you often show all your cards in the process. It was an Aries that bought tickets to the inauguration for your whole family when they heard Hillary Clinton was running, and then ended up planning the worst vacation ever. But next year will be the year of opportunity for you, and your willingness to take the lead and the leap with business ventures will literally pay off. Get ready to make money moves!

You have a laser focus and strong determination, which actually explains your attraction to living a rather simple life — your eye’s on on what’s actually important. Unlike me, you didn’t forget to pick your mother up from the airport because Beyoncé released her pregnancy photos and you just had to bask in it for two hours (sorry again Mom). But I predict you actually will get distracted this year. After being so focused on work, it will be much needed, and lead to joy that you’ve never known.

You constantly think of things from multiple perspectives. Just like Warren Beatty, you probably somehow thought La La Land and Moonlight were the same movie. But the fact that you’re a walking contradiction has made you a great communicator — you are constantly having to explain yourself. This year, you’ll talk your way out of some hot water that will put you in an even better place than you were before.

Your mood constantly changes. One day you were #TeamTaylorSwift and the next you were lining your bedroom with the receipts that Kim Kardashian provided to expose her (it makes for beautiful wallpaper). But 2018 will be the year to expect the unexpected for you. It will be filled with lots of ups and downs that will appear out of nowhere. Your ability to not get stuck in one mode will be a great asset.

You are the life of the party. You love to be the center of attention and show off your skills, and even like to get recognition from your audience for it. You were the first in your friend group to get an iPhone X, and wouldn’t shut up about it until you got some form of “wow, the camera is really great.” However, this year, you’ll discover the value in being behind the scenes.

You can read people very well and have a keen sense of good and bad. As a result, you often proceed with caution in many situations and can even be discriminating. I bet you were the only one could never quite get behind Kevin Spacey after American Beauty — you saw it coming. This year, your sixth sense will actually lead you to love. It won’t seem like it at first, but trust your gut, and a budding relationship will follow.

You have a very balanced mind, and are therefore great at settling disputes and maintaining harmony in your everyday life. You’re probably the only person that could convince B.o.B that the Earth is round. Even though you’re the one your friends come to in order to settle things, getting in the middle of disputes may become too much for you. Why would you hop in some beef when you can just hop in a Porsche, amiright? Go with this feeling — not getting in the middle of things will lead you to a new sense of balance and peace.

You’re one to hold a grudge. You haven’t been able to watch This is Us because it made you cry in the pilot. I get it, you don’t wanna get hurt. I know this sounds crazy, but go with this in the New Year. You’re sensitive to people that have wronged you, and avoiding a certain someone or something again based on past events will be a great way to protect yourself.

You’re an optimist — even the greatest of hardships can’t get you down. You’re probably not hibernating right now or stress eating Christmas leftovers. Why can’t I be you?! However, ironically, you’ll have extremely good fortune next year. You’ll be able to reap what you’ve sown, getting some downright good luck. Your optimism will actually help you appreciate the good things you’ll get in the end.

You’re an over-achiever, and are super ambitious. Even though you spent three weeks on your 5th grade history presentation and all of the kids laughed at you because you wore a Harriet Tubman costume to present it, you were actually cool because you cared! (Did I mention I’m a Capricorn?) Don’t stop in 2018. You’ve put in a lot of work toward your goals in 2017, and if you continue with this strong work ethic no matter what your peers say, you’ll finally reach your goal.

You love a crowd. You’re at every club or big social function and as a result have a lot of acquaintances, but very few close friends. You probably didn’t have anyone give you a bootleg of the Taylor Swift album, and you had to buy it like some chump. I’m sorry. However, being completely on your own, and not even relying on the comfort of a crowd will work in your favor next year. 2018 will create some very good problems for you, like having to juggle multiple new career and leisure opportunities. It’ll be up to you and you alone to tackle them.

You’re a dreamer and a romantic, and often in a world of your own. So much so that you often can ignore the thoughts and feelings of even those that are close to you. (Did I mention that my boyfriend is a Pisces?) But that quality is the reason you’re so sensitive and imaginative. You see the world for what it could be instead of what it is. 2017 has had its ups and downs, but you’re walking into 2018 with more hope than most. It’s a good thing because the New Year will be eventful for you, in more exciting ways than bad. Stay imaginative and hopeful, and don’t get sucked into this crazy world, because it’ll still be crazy. But stay above it — you’re better than it. And keep being sweet to your girlfriend!

Any other predictions for 2018? Let us know on Twitter @Smosh!

How to make flavored salt yourself. Super Easy!

One bag that everyone is crazy about today