Home Furilia Could You Be a Detective? Recognize the Killer in the photo? 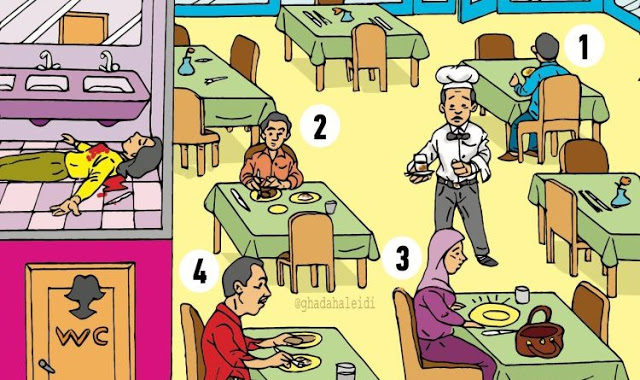 Could You Be a Detective? Recognize the Killer in the photo?

Crimes and solving murders are of interest to many people. Are you ready to test yourself and your abilities? Could you become a detective? Journal “Furilia” prepared an interesting test riddle for those who are not averse to uncover the secret of one murder. Plus, you can train your brain and improve its activity. Ready? Let’s get started.

Test picture: can you find the killer in the photo?

This riddle is not as simple as it might seem. In fact, a very small proportion of the people surveyed were able to answer the question correctly. But who knows, suddenly you will be among them?

Look carefully at this picture.

On the left side you see the dead body of a woman who lies in a pool of her blood. Yes, she was brutally killed, but the question is, who did it?

Four suspects are numbered. Can you try to guess which one is the killer?

Do not rush, think. Take a close look at these restaurant visitors. Who do you think is a criminal?

Take a look at the correct answer below.

1) The knife (the murder weapon lies next to the victim) is missing on his table!

2) His clothes look messy (look at the sleeves of this shirt), which indicates that he was in a quarrel with someone, which probably led to a fight.

READ ALSO Saints: 7 Celebrities Who Did Not Make Love With a Partner Before the Wedding