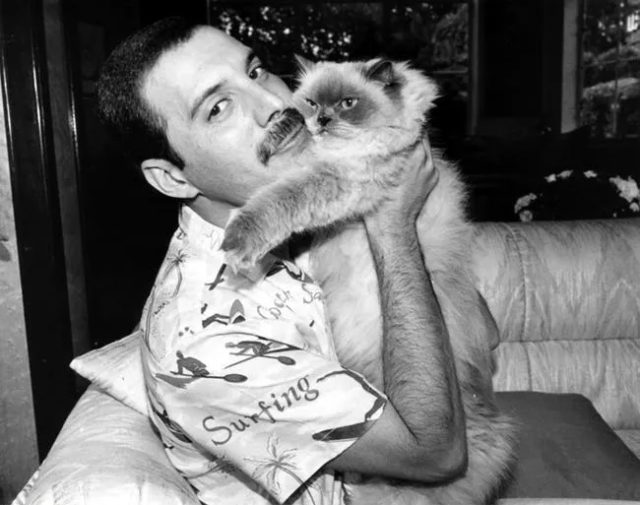 We will  show you the pets of famous actors, musicians, writers and artists.

From Salvador Dali and Picasso to Marilyn Monroe and Michael Jackson. And which of these rare retro shots did you like the most? Tell us in the comments 😉

Vocalist Nirvana with a little friend on his shoulder

The writer admitted that he could not pass by the cat, so as not to stroke it. Especially if he purred

An eccentric artist in an embrace with his ocelot named Baba

In his home in Cuba, the American writer kept a whole family of cats, which by 1954 had grown to 34 fluffy souls!

Famous writer poses for photos with his pet

The famous actress had a lot of cats. The picture shows one of them named Ali Khan.

The French philosopher and playwright apparently loved to work in the company of a fluffy cat.

Oscar, Goliath, Miko, Romeo and Lily lived in front of the Queen’s frontman. Pictured in 1986, the singer is captured with a Tiffany cat

In the photo, dated 1954, the world-famous artist keeps a pet

American actor with a cat Marcus, whom he gave to Elizabeth Taylor in 1955

The famous actress loved animals and treated them well

Isn’t that cute? Share this collection with your friends in social networks, and do not miss:

READ ALSO HOW TO DO SIMPLE CAT EYES MAKEUP Perfectly!

READ MORE When tastes came together: celebrities who choose the same clothes