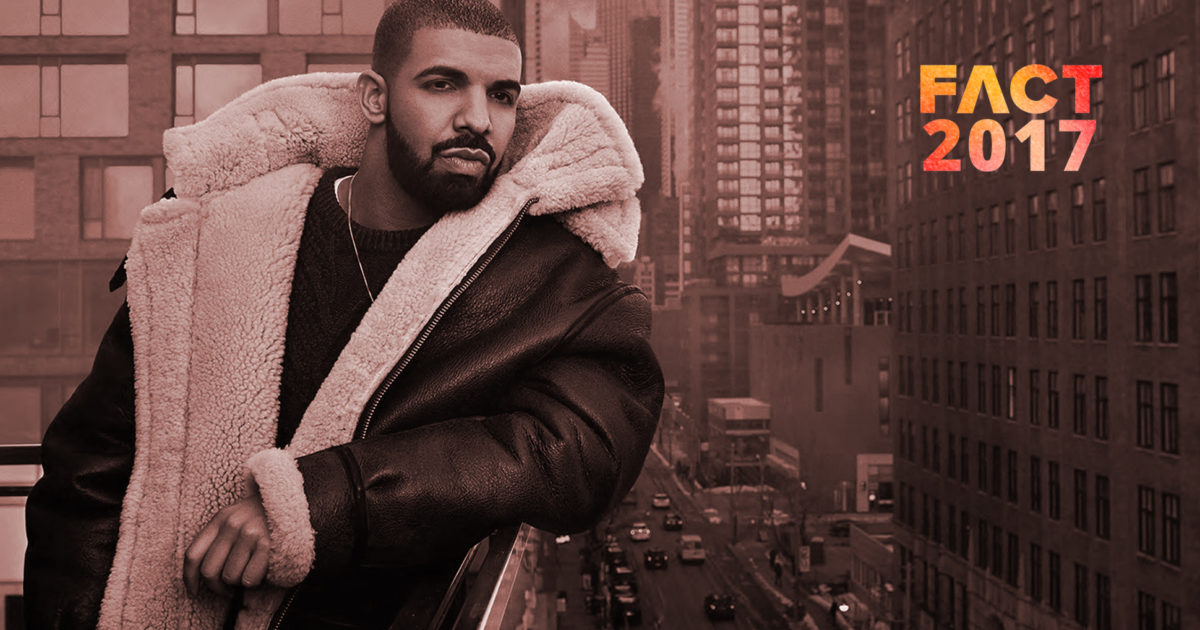 Drake’s 2017 project More Life experimented with the presentation of between-album releases, something he’s been tinkering with since 2015’s If You’re Reading This It’s Too Late. Dubbed a “playlist”, this new music found Drake dabbling in dancehall, trap, grime, house and techno. What does such an eclectic collection mean for his next proper full-length? Rae Witte looks back at Drake’s year and divines what to expect from The Boy in 2018.

Drake brought in 2017 cozied up with the illustrious Jennifer Lopez. Although they were publicly affectionate IRL and across social media platforms, their supposed love really only translated into a sample clearance. By spring, the biggest revelation from their apparent canoodling was the ghostly use of J.Lo’s breakout single ‘If You Had My Love’ on Drake’s ‘Nothing Into Something’, a track on his “playlist” More Life. He described the project as “a body of work created to bridge the gap between major releases.” Debuted in March via OVO Sound Radio on Beats 1, More Life was also Drake’s declaration that he is “off” mixtapes: “I want to give you a collection of songs that become the soundtrack to your life.” And it worked. All 22 songs on the playlist would go on to a hold a spot on the Billboard Hot 100. This not only gave him the record for most entries at a time by a solo artist in the history of the chart, it also proved him right.

This concept, releasing a project between major albums, is how we got both 2015’s If You’re Reading This It’s Too Late and Future and Future-collab album What A Time To Be Alive after VIEWS, then Views From the 6, had already been announced. And although he hasn’t let any go as of late, let’s not forget Drake used to drop some album-worthy loosies like ‘Girls Love Beyoncé’ and ‘The Motion’. He is always leaving breadcrumbs for what to expect next.

After teasing a Peverelist-sampling track in July and another new song at a New Zealand date of his The Boy Meets World Tour in November, Drake suggested we should expect new music soon. Looking back at his 2017, there are a few things that can be deduced about the possible themes of his upcoming project.

Drake has been working on a re-up of Top Boy, which is due out on Netflix in 2018. It takes him back to his acting roots, but it’s also another nod to his love for the UK. His first no. 1 hit ever on the Hot 100 was 2016’s ‘One Dance’, an interpretation of UK funky anchored by a sample of Crazy Cousinz’s ‘Do You Mind’ remix; he then stuffed More Life with Brits like his previous collaborators Skepta and Sampha, as well as grime vet Giggs and budding superstar Jorja Smith, whose Preditah collab ‘On My Mind’ was one of FACT’s favorite tracks of 2017.

More Life also dug into dancehall, Afrobeats and trap and sampled Detroit techno icon Moodymann on track ‘Passionfruit’, while Durban house luminary Black Coffee’s ‘Superman’ was reworked for ‘Get It Together’. Drake has always been an electic music fan – his breakout So Far Gone tinkered with Houston’s screwed sound, but also played with Swedish indie via Lykke Li and Peter Bjorn and John – but his recent work has seen him come back around to letting his curiosity inform his sound.

As Drake closes out his 20s at the top of his career, he’s moved away from his Heartbreak Drake POV. He leaned heavily into a beef with Meek Mill – a conflict that is now notably over – and was to be carouseling between Rihanna and tennis superstar Serena Williams in his romantic life. Between J.Lo, RiRi and a woman who may currently the be the greatest living sports star, it seemed like Drake was doing the kind of juggling act he’s been aspiring to pull off since he and Nicki Minaj joked about being married. (Seriously, google “Drake proposes to…” and you’ll see a long list of female celebrities.) But as the year progressed, Lopez settled down with former Yankees all-star Alex Rodriguez and Rihanna became a beauty mogul and was romantically linked to billionaire Hassan Jamee. Williams, of course, gave birth to her first daughter with fiancé and Reddit co-founder Alexis Ohanian. The two were married later this year.

Welcome to your 30s, Aubrey.

It is, however, fairly unlikely he’ll regress back to Take Care Drake. But as he gets back into acting and some of the paramours he’s been publicly linked to settle into serious relationships, we could be in for some real introspection. It may, however, come in the same gruff hue as 2015’s IYRTITL. Drake made his first trip back to Miami’s Art Basel since 2014 where he saw the early bubbling up of a friendship with Skepta, who Drake would go on to thank on the tape. Despite a handful of releases since then, it is still one of his career-best projects. Truss – all of this could mean something great.