Kelly Marie Tran knocked down walls to become the first Asian-American woman to snag a leading role in the Star Wars franchise, but some racist losers aren’t enthused. Tran, who plays mechanic Rose Tico in The Last Jedi, has had her page on “Wookieepedia,” a Star Wars fan-run encyclopedia, desecrated by racist remarks, according to Newsweek.

The attacks included changing her name to “Ching Chong Wing Tong,” and her character’s homeworld to “Ching Chong China.” (Tran is Vietnamese-American.) There was also a fake quote from Rose and a false biography added. 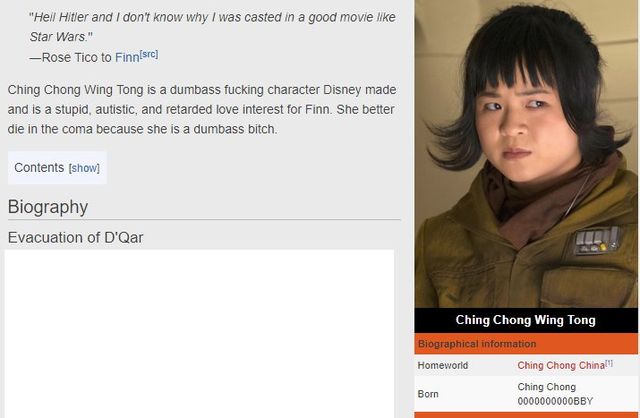 The vandalism has since been removed, and the IP address of the editor has been blocked from Wookieepedia and all other FANDOM wikis.

Despite this disgusting slander, other Star Wars fans have been celebrating Tran’s awesome character, and Tran herself has spoken out about her character and her excitement for her new role.

The actress told USA Today: “We always hear these stories about people who are born into a specific position, like you’re the chosen one or you have a power or you are a hotshot. Rose represents this person who’s in the background. It’s really cool to see someone [like that] be forced into the forefront of the action and how she deals with it.” 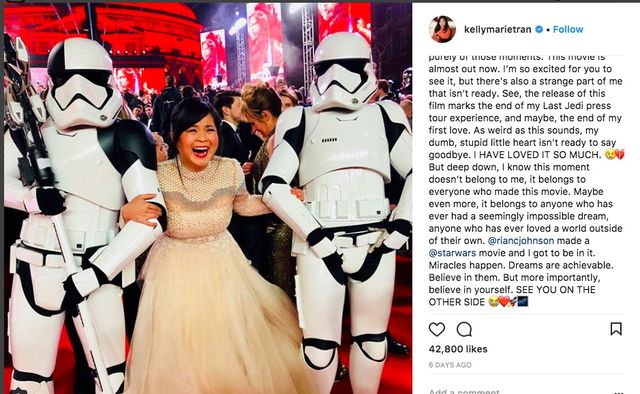 We’re behind you, Kelly!