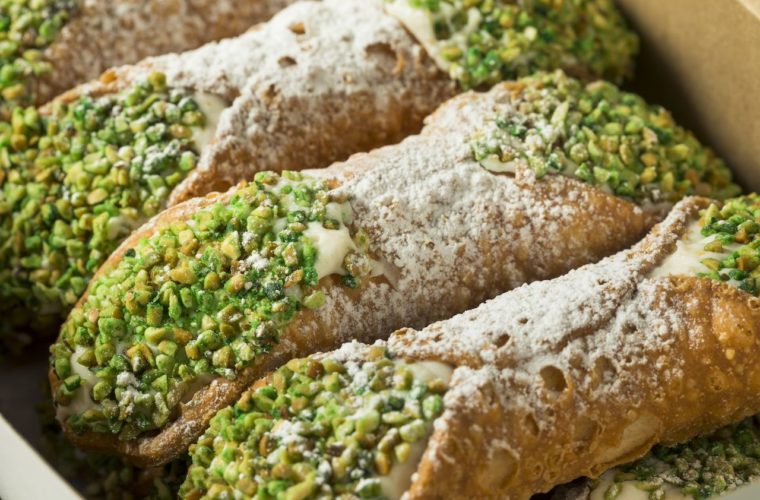 YOU DON’T MESS with desserts in Italy. Many of them are connected with religious festivities such as Easter, Carnival, or saints’ days, which means there is a legitimate cultural reason to be scoffing them. Some have become so important that they are given geographically-protected status, which means that they must be produced in a certain area of Italy to regulated standards. So, while in Italy, expand your dessert horizons from gelato, and look out for melt-in-the-mouth chocolate cake and a whole lot of deep-fried treats. Cannoli are made from fried pastry dough rolled up into a tube and filled with a sweet ricotta cream. The ends are then coated in pistachio crumbs, chocolate chips, or studded with candied fruit. This Sicilian dessert has become so popular that it can be found all across Italy, though the best place to eat them is, of course, Sicily. Cannoli can be found in bakeries and cafes throughout Sicily costing around 2-3 EUR a piece. Walking around the streets of Naples city center, you’ll see many tiny shops selling sfogliatelle. About the size of the palm of your hand, these pastries have the form of a shell, or a ‘lobster tail’ as they are sometimes called in America. Although they can be made using shortcrust pastry, it is the flaky pastry that gives them the characteristic appearance of being built up from several layers of wafer-thin leaves (sfogliatella means thin leaf or layer). They are usually filled with ricotta, candied citrus peel, and semolina, and at one 1-2 EUR a piece, they make for the perfect breakfast treat, especially if just out of the oven. Carnival time in Italy is traditionally a period of indulgence and festivity before the dark days of fasting over Lent. As such, dessert production booms in this period and the whole of Venice seems to smell of icing sugar. One of the most widespread desserts produced during Carnival are chiacchiere. These are made with boozy dough that is rolled out thinly, cut into squares, deep-fried, and dusted with a generous dose of icing sugar. Chiacchiere are crunchy, light as air, and very addictive, but luckily they are generally sold in big trayfuls and by the kilo. They have different names throughout Italy, so if you are in Venice for Carnival you need to look out for “crostoli” instead. Rather incredibly, these can range from 15 to 30 EUR a kilo, sometimes more, though if you make friends with a Venetian family, you will almost certainly be plied with free trays of their home-made ones. No Tuscan meal is complete without crunchy cantuccibiscuits and a glass of sweet Vin Santo. These biscuits normally have pieces of almond inside, though there is a myriad of flavor variations from mint chocolate to orange or cardamom. They are intentionally very dry so that you can dip them into the sweet Vin Santo until they become soft and steeped in wine. In a restaurant, you pay the average dessert price of 5-6 EUR for a plate of several cantucci and a glass of wine. Alternatively, you can find them in bakeries and supermarkets ranging from 2 to 5 EUR per 200g packet depending on the quality, and have them dipped in your morning cappuccino. In many regions of Italy, zeppole are traditionally produced to celebrate St Joseph’s Day (also Fathers’ Day in Italy), and so are called zeppole di San Giuseppe. The dough is shaped into balls and fried or baked, and then topped with a swirl of crème patissiere and a cherry glacé. This is definitely a guilt-free dessert — you gotta celebrate St Joseph after all! Found throughout Naples in pasticcerie (pastry shops), it costs around 2-3 EUR for one. Christmas markets are a big attraction in the north of Italy, particularly in the region of Trentino Alto-Adige. Here, the crisp winter air is usually filled with the scent of sweet, fried things, such as frittelle di mele. The recipe is simple, thin circular slices of apple coated in batter, and deep-fried. To warm numb hands and feet while visiting Christmas markets, there’s nothing better than a steaming mug of mulled wine and a paper cone of frittelle di mele, fried to order so you can eat them while they’re hot. Prices in the markets do vary considerably from around 15 to 30 EUR a kilo. Any self-respecting Italian restaurant will have torta della nonna on the dessert menu. “Torta della nonna” translates as “grandma’s cake,” so you can be sure that it’s real comfort food. It has an exterior of shortcrust pastry which is filled with crème patissiere and covered with pine nuts and icing sugar. Originally from Tuscany, it can now be found throughout Italy. A large slice, perhaps with a dollop of cream or ice cream, normally costs around 5 EUR in a restaurant. La tenerina, a dessert originating from the city of Ferrara, is somewhere between a cake and a mousse, with a soft, squidgy center and a crispy exterior. The recipe is gratifyingly simple — dark chocolate, butter, eggs, sugar, and a little flour. It’s usually found as a dessert in restaurants where, to be extra luxurious, it’s eaten warm with cream or vanilla ice cream. You’ll find it for around 5 EUR on a dessert menu.

If ever anyone starts to smugly extol the virtues of the Mediterranean diet to you, remind them of crema fritta, AKA fried cream. Unsurprisingly, crema fritta is another Carnival calorie hit, originating in the Veneto. It consists of crème patissiere that is allowed to solidify, cut into squares, coated in breadcrumbs, and then fried. While in the Veneto it is eaten as a dessert, in other areas of Italy it is, rather unusually, eaten with savory, fried snacks like olive ascolane, vegetables, and meat. Bought from a street stall vendor it usually costs around 5 EUR for 8-10 pieces.