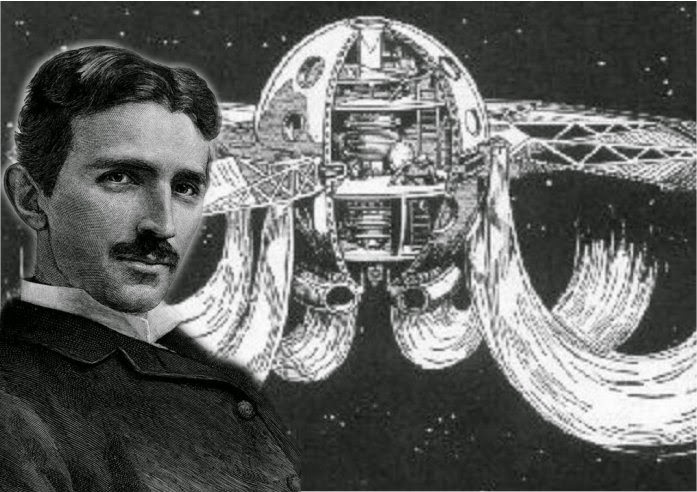 Nikola Tesla was one of the greatest scientific minds our world has ever known. Although mysteriously absent from school textbooks, he accomplished much in his lifetime, discovering radio and remote control — the backbone of NASA’s current technology — drone technology, cosmic radio waves, and more. He was also a big proponent of free, unlimited energy for everyone.

Tesla publicly demonstrated his first working model of a robot guided by radio waves, unveiled to many astonished viewers at the Electrical Exposition held at Madison Square Garden, in May 1898. This was front page news in America at that time. It marked the first time that radio waves were used to guide the movement of a robot — 11 years before Marconi was awarded the Nobel Prize for the discovery of radio in 1909.

In today’s world of science, few remember that most of our pioneering physicists and chemists were mystics. Certainly this is the case for Tesla, whose idea of free energy was greatly influenced by Vedic philosophy. It is an unfortunate reality that even someone as brilliant as Tesla would be maligned as a pseudoscientist by mainstream researchers if he were alive and working today.

Tesla wasn’t just a proponent of wireless communication and energy. He also believed we are not alone in the universe — a conclusion which has become blatantly obvious, even to many mainstream scientists. In fact, a recent congressional hearing in the United States saw top U.S. astronomers tell Congress that extraterrestrial life most certainly exists, without question. And a number of scientists and military and political personnel have told us that we are not alone, and that we have been being visited by intelligent extraterrestrial life for a long time.

Tesla offered these remarks in an interview he gave to Time at the age of 75:

I think that nothing can be more important than interplanetary communication. It will certainly come someday, and the certitude that there are other human beings in the universe, working, suffering, struggling, like ourselves, will produce a magic effect on mankind and will form the foundation of a universal brotherhood that will last as long as humanity itself.

Few people know that in 1899, while working at his Colorado Springs laboratory, he announced that he had received extraterrestrial radio signals. The scientific community thought he was nuts, and in fact, cosmic radio signals didn’t even exist at the time. One an easily imagine how alone and misunderstood Tesla must have felt. The Black Knight Satellite

It’s known as the “Black Knight Satellite,” and although it wasn’t confirmed by scientists until 1932, Tesla discovered it in 1899 while in his Colorado Springs laboratory, hearing strange rhythmic sounds on his radio receiver. The confirmation in 1932 gave birth to the field of radio astronomy, which is now used to decode and detect messages from distant stars and other mysterious celestial sources. Tesla writes:

I can never forget the first sensations I experienced when it dawned upon me that I had observed something possibly of incalculable consequences to mankind. I felt as though I were present at the birth of a new knowledge or the revelation of a great truth. Even now, at times, I can vividly recall the incident, and see my apparatus as though it were actually before me. My first observations positively terrified me, as there was present in them something mysterious, not to say supernatural, and I was alone in my laboratory at night; but at that time the idea of these disturbances being intelligently controlled signals did not yet present itself to me.

The changes I noted were taking place periodically, and with such a clear suggestion of number and order that they were not traceable to any cause then known to me. I was familiar, of course, with such electrical disturbances as are produced by the sun, Aurora Borealis and earth currents, and I was as sure as I could be of any fact that these variations were due to none of these causes. The nature of my experiments precluded the possibility of the changes being produced by atmospheric disturbances, as has been rashly asserted by some. It was some time afterward when the thought flashed upon my mind that the disturbances I had observed might be due to an intelligent control. Although I could not decipher their meaning, it was impossible for me to think of them as having been entirely accidental. The feeling is constantly growing on me that I had been the first to hear the greeting of one planet to another. . . . I was not merely beholding a vision, but had caught sight of a great and profound truth. (source)(source)

Tesla believed that the signals he was picking up on were from Mars. Here’s another statement he gave on what he found:

Others may scoff at this suggestion…[of] communicat[ing] with one of our heavenly neighbors, as Mars…or treat it as a practical joke, but I have been in deep earnest about it every since I made my first observations in Colorado Springs… At the time, there existed no wireless plant other than mine that could produce a disturbance perceptible in a radius of more than a few miles. Furthermore, the conditions under which I operated were ideal, and I was well trained for the work. The character of the disturbances recorded precluded the possibility of their being of terrestrial origin, and I also eliminated the influence of the sun, moon, and Venus. As I then announced, the signals consisted in a regular repetition of numbers, and subsequent study convinced me that they must have emanated from Mars, the planet having just then been close to the earth. (source)

According to the American Physical Society Physics, Tesla concluded that these signals, or this strange unnatural object they originate from, was indeed extraterrestrial, or an effort to “communicate with Earth by alien beings.”

This was one of multiple incidents in which Telsa intercepted what he thought were intelligent signals from space. He states that even the simplest form of communication (such as the interchange of numbers) could represent a form of intelligible transmission from extraterrestrials.

When I came across that information, I instantly thought about this NSA document, which is one example of strange messages that come from space, as elaborated on below.

Today, we know for sure that these signals are of extraterrestrial origin, but it’s assumed that they are radio waves from planets, comets, stars, or galaxies — not ‘ET.’

More than 30 years after the confirmation in 1932, a graduate student by the name of Jocelyn Bell noticed some strange data coming from her telescope at the Mullard Radio Astronomy Observatory (MRAO). After a few weeks, she noticed that the signal being produced could not have originated from any known natural source, and she (and her team) ruled out every conceivable explanation, such as multiple sources of human interference, other radio astronomers, radar reflected off the moon, orbiting satellites, television signals, and more. Nothing could explain these strange signals.

She eventually published a paper in the scientific journal Nature, despite the fact that the source of the sound, though they knew it to be artificial, had not been determined.

These announcements caused quite a commotion at the time, and today it is common for strange signals, determined to be coming from ‘non-natural’ sources, to be detected. But who knows what they are?

Just last year, strange radio wave flashes from far outside of our Milky Way galaxy (or in it) had scientists completely confused; you can read more about that here.

I just want to make it clear that this type of stuff is always going on.

You can also read Is Stephen Hawking right about aliens?