Home Travel The Underground Life Of the Planet: What Is Hidden In the Bowels Of the Earth? 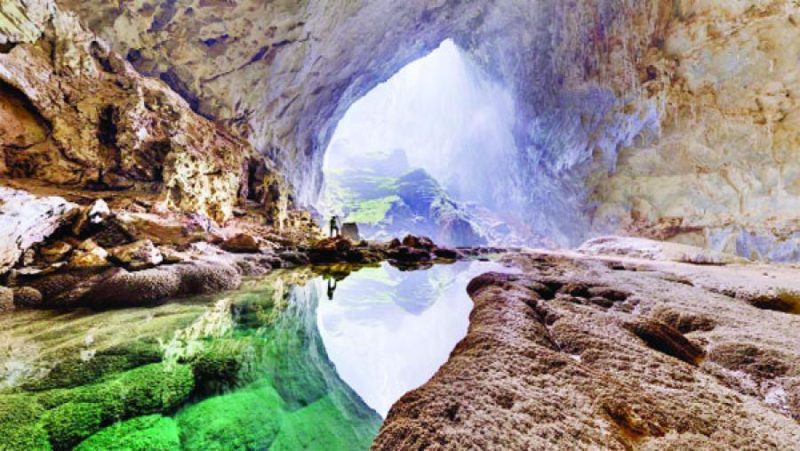 The Underground Life Of the Planet: What Is Hidden In the Bowels Of the Earth?

Today we offer to go down to the surface of tropical islands and continents, where researchers discover more and more unusual things.  You can explore the depths of the planet to understand what huge labyrinths are hiding under the massive forests and deserts of the Earth.

On a hot April morning, two British cavers (i.e. cave explorers) named Frank and Cooke descended into the dungeons, located deep beneath the tropical forests of the island of Borneo. Under the island there are hundreds of caves into which archaeologists have not yet stepped. The British hoped to go down in history, thanks to the unusual discoveries of uncharted earth cavities. First they got to Caves of the winds, and then visited the bowels of the cave system Clearwater.

Under the island there are two systems of labyrinths, the combination of which could create a “super system” of dungeons – the largest on the planet. The underground length of Clearwater is 225 kilometers. Some of the caves are cut by stormy river channels, while others contain chambers so huge that a jet liner could easily fit into the walls of these caves. Borneo is a country of dreams, Disneyland and Neverland in one bottle. This is a very exciting place. But any person who is keen on traveling will ask himself: have any unexplored territories still remained on Earth?

Top 7 most mysterious caves on Earth

Many expeditions aimed at exploring the caves, because the earth’s cavity and the depths of the ocean are the most mysterious places on the planet. Meanwhile, not all underground labyrinths you can visit on your own …

The first to come to mind is Papua New Guinea – an island nation located in Oceania. In 2014, France sponsored an expedition of cavers to the caves of Papua New Guinea. First of all, scientists were interested in the mountain system. Nakanai, which is famous for karst cavities. These caves became so famous that James Cameron, the Hollywood director, even made a film called Sanctum. The premiere of the thriller about a group of speleologists, lost in the depths of the caves, took place in 2010. However, you should not trust the beautiful picture of the film, because not the dungeons of Papua New Guinea are shown there, but the famous Swallow Cave in Mexico.

The peculiarity of Papua New Guinea is that the caves and karst craters here are lost in the depths of the untouched equatorial forests. In 2014, the French expedition explored such formations as Nare, Kawakuna, Vovo and Muruk. Surprisingly, the locals have no idea what masterpieces of nature are under their nose. Most of all archaeologists were struck by the so-called Vara Kalap. This is the name of the spillway in one of the karst craters. The volume of Vara Kalap is about 5 cubic meters of water. To imagine how much it is, imagine that you have a stream that could fit in 500 aluminum buckets. However, this is not the largest spillway in the caves of Papua New Guinea. In the bowels of mountain ranges there are spillways up to 20 cubic meters of water.

The depth of the caves often exceeds 100 meters. At the same time, going down inside the karst funnel, you will surely find large cavities similar to underground halls. However, traveling to such places alone is mortally dangerous: a small tropical thunderstorm will turn the karst cavity into a trap from which an unlucky traveler is unlikely to get out.

Thailand is an exotic country, which is also famous for its unusual for the European eye architecture, strange-tasting food and “wild” cultural customs. However, another visiting card of the country is the limestone cave. Nam Lod. For example, archaeologists managed to find in the depths of Nam Lod a human skeleton whose age exceeds 20 thousand years. In the caves preserved primitive dwellings and parking, so this place is popular among tourists.

“Nam Lod” means “water that passes through.” This name perfectly reflects the picture that opens before the gaze of the traveler. The dark cave surprises with huge limestone forms, the height of which sometimes reaches 20 meters. In order not to get lost in the labyrinths of Nam Loda, tourists are provided with lanterns, because natural light does not enter the cave. Unlike the karst masterpieces of Papua New Guinea, in Thailand you can safely book a tour and visit Nam Lod. Traveling to the cave includes pedestrian and water parts. Travelers will be able to see stalagmites, stalactites – the distinctive characteristics of dungeons, sculptures from nature. The tour group consists of three people and one guide. This pleasure will cost a tourist about $ 20.

Let’s go back to the strange island of Borneo. The second name of the third largest island in the world is Kalimantan. Here, along walking routes, snails and frogs try to stay in the shade, and the birds scream loudly from the growing heat. One of Borneo’s phenomena is “hot” caves, where temperatures can reach 25–30 degrees Celsius.

The place of interest to us is the national park Gunung Mulu, tourist property of Malaysia. In general, Borneo is replete with national parks, of which there are 12. Gunung Mulu is lost among the rainforests and the jungle, but here, unlike karst craters, you can get to a curious traveler without danger to life. The park stretches for 750 square meters2. To get here you will need to overcome either 100 kilometers along the river, or use an airplane as a transport. Air “swimming” will take about an hour.

The park is not popular with tourists because of its remoteness, however, those who get here will not regret it: Gunung Mulu is famous for its stunningly beautiful grottoes, and some caves, lost deep in the forests, are still waiting for their discoverer. Here is one of the largest grottoes in the world – Sarawak Chamber. Want to imagine its size? Then just think that in the middle of the cave 50 passenger planes could easily fit.

Yes, we are still in the Gunung Mulu National Park on the island of Borneo. However, we forgot to mention that the largest cavity on the planet is located here. Its name is Deer Cave. Once this place was a haven for deer hunted, which gave the natural phenomenon its name. To imagine the size of the Deer Cave, for comparison, think that it would be easy to place five St. Paul’s Cathedrals here!

The entrance to the cave is 152 meters high. At the top of the cave, a giant colony of bats settled (zoology enthusiasts will be able to get acquainted with 27 of their species), and under the feet the traveler will see thick piles of guano, teeming with cockroaches, crabs, worms and many microbes. The British team of cavers found that Deer Cave stretched for almost 2.5 kilometers. Its end is so amazing that it was called the Garden of Eden. By the way, Deer Cave is a relatively recent find. It was opened only in 1978. Tourist routes have come into fashion here since 1984.

Many discoveries are the work of chance. This happened with the Shondong cave, which was found in 1991 by a simple man from Quang Binh province. In search of shelter from the rain, Ho Han came across mysterious mazes. At first, the cave greatly frightened the traveler, because strange noises came from its depths. After 18 years, Ho-Han again found himself in a cave, but already as a guide for a group of British researchers. A speleological expedition to this area yielded results: scientists found a whole city created by nature deep underground.

The length of the cave labyrinths is 9 kilometers, the height of the arches sometimes reaches 200 meters. Last time, we abstracted airplanes or cathedrals in caves, but now we could put here a real New York quarter, including all its huge skyscrapers!

The “innards” of the cave are full of tropical forests and turbulent river currents. In addition, an active life takes place in the cave: a specific living creature is found here. It will not be so easy to visit the cave – because of the financial issue. The price of a rare excursion to Shondong will be 3 thousand US dollars. However, the duration of the tour is impressive – the trip is designed for a week.

This cave in itself does not make any sounds, but it was nicknamed by its poetic name – “Reed Flute Cave”. The name natural phenomenon was due to the abundance of bamboo thickets that were used to produce flutes.

The cave is located near the Chinese province of Guilin. Most of all, the dungeon is more than 1300 years old. The length of the underground labyrinth is half a kilometer. Once upon a time in the place of Guilin Province, the ocean was raging. When the waters receded, deep cavities formed cavities that turned into caves.

The “musical” labyrinth is a paradise for cavers and geologists. Many stalactites and stalagmites received personal names: “Dragon Pagoda”, “Fruit Mountain”, “Dawn in the Lion Grove”, etc. Visiting the cave, unlike the wild places of Borneo and Papua New Guinea, is very comfortable: there is lighting , convenient platforms for moving tourists and affordable prices. A curious traveler will be able to enjoy the beauties of the “Reed Flute Cave” for only $ 18.

The deepest cave in the world – Krubera-Voronya

A natural formation that has broken all records in depth is located in Abkhazia. However, now the newly discovered caves have surpassed Krubera-Voronya, but still its depth is impressive – it is almost 2200 meters. Getting to the cave is not so easy, because the entrance here is at an altitude of 2.2 kilometers above sea level.

Inside the cave resembles a dungeon with many passages, manholes, halls and plumb lines. A visit to Krubera-Voronya may seem dangerous, because some plumb lines reach 150 meters in depth. Given these circumstances, you can get into the cave only in the company of professional cavers.

Minneapolis has one of the most unusual caves. Firstly, the natural light in the cave resembles a rainbow, which is why it was called “Rainbow”. Secondly, the main property of the cave is a frozen waterfall.

Minneapolis is located in the state of Minnesota, in the north of the USA. Here, next to Niagara Falls, the now-popular Niagara Cave was found, the icy underground waterfall of which has become a place for visiting couples from all over the world. Seeing the mysterious cave is easy: a ticket for adults costs only $ 14.

So, as we see, the planet Earth is still the same “white spot” on the map, as in the days of Columbus. We do not understand how many places remain hidden from us, and how many mysterious discoveries have yet to be made in the future.

READ ALSO What Do Miss Universe-2018 Participants Actually Look Like Without Makeup?

Quick Test: The First Animal You See Tells About Your Personality.