Home Tech Shuffling your way onto another plane of reality. Cultist Simulator Review 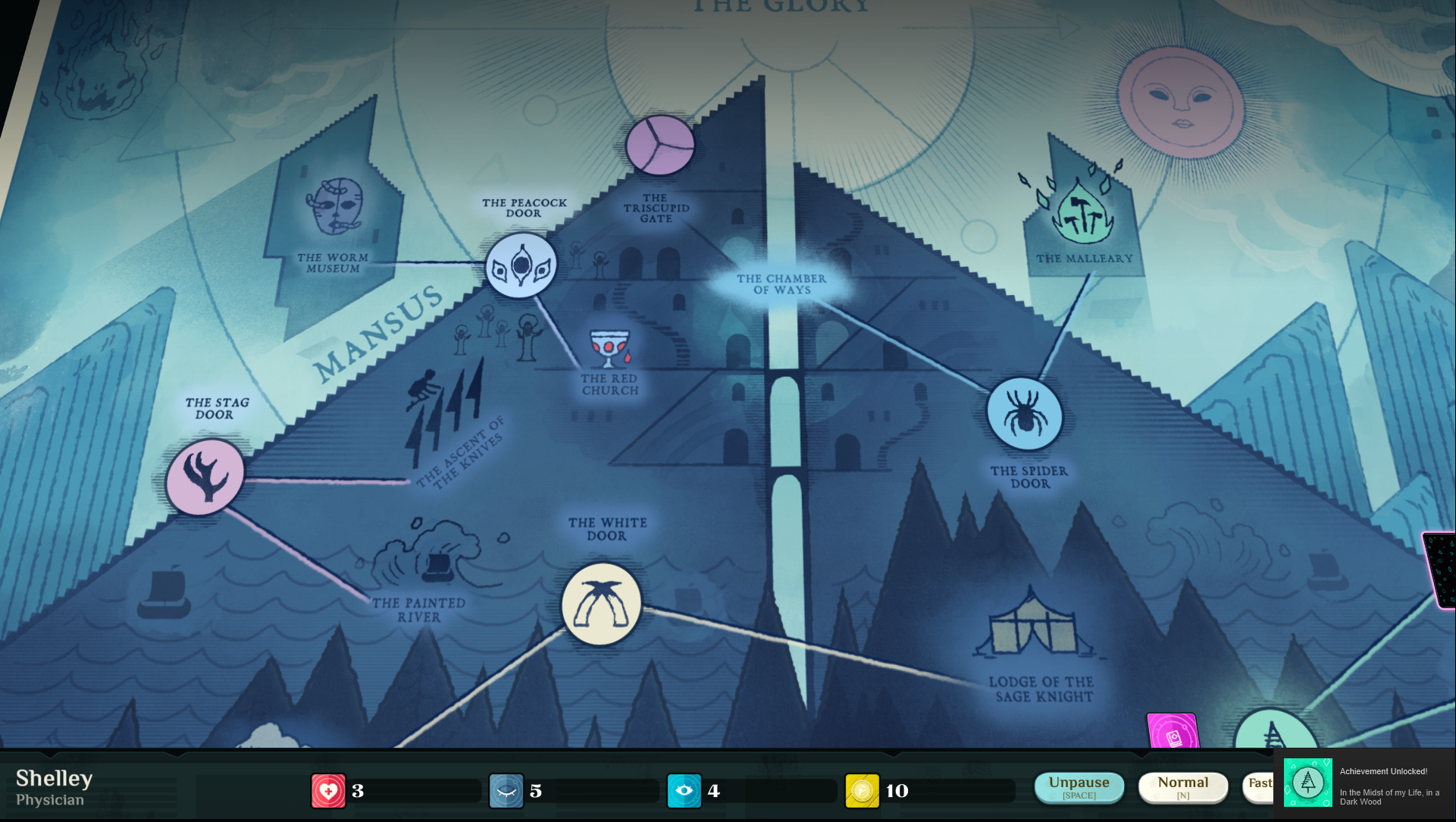 Shuffling your way onto another plane of reality. Cultist Simulator Review

Cultist Simulator‘s straightforward no-nonsense title belies the enigmatic journey it takes you on as you seek arcane truths and perform blasphemous rituals. It’s a digital card game that shows you glimpses of the world through snippets of rich, literary text, all while tasking you with collecting abstract concepts like passion and reason and using them like currency.

Ostensibly, Cultist Simulator is about gathering disciples to your cause as you strive for your purpose, be that enlightenment or the worship of chaos. But it’s no surprise that it’s much more than that. After all, it comes from the labyrinthian imagination of Failbetter Games founder Alexis Kennedy, who developed games like Fallen London and Sunless Sea. It’s the debut title from indie studio Weather Factory, which Kennedy founded alongside Failbetter producer Lottie Bevan, and it’s out today on P

An intertextual tale full of secrets 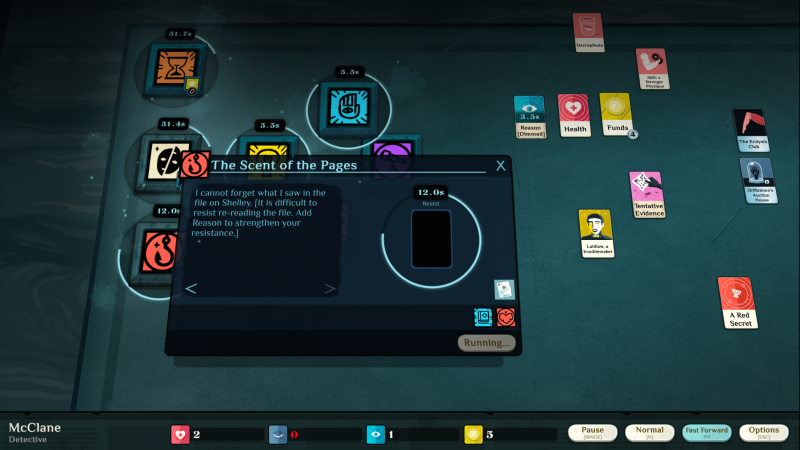 Above: The Detective recalls grim reminders of a physician who succumbed to the occult.

You begin Cultist Simulator as the Aspirant, a penniless student who is alone in a callous city. You ask yourself, “What now? Could I become something more?” To answer that question, you soon find that you have to delve into the supernatural. You dream about a house without walls and an eerie forest all around it. Strange, powerful beings beckon to you, each mysterious in their own way. Wherever you turn, you find references in books to the imagery that haunts you — lantern light, moths, and silent winter.

Cultist Simulator is about trial and error while gathering the resources you need to continue your journey. You’ll need reason, passion, health, and wages to survive, but that isn’t all. You’ll spend most of your paycheck on books from an inscrutable shop that’s stocked with esoteric books in Greek, Latin, and Aramaic. Once you latch onto a founding principle for your cult, you’ll need to recruit followers and find ways to turn them into believers to help you perform rituals and reach the goal you’ve set for yourself. You’ll send them out on quests to ransack old castles and trek through the mire to find treasure. And all the while, you’ll have to escape the suspicion of the sinister Suppression Bureau, which hunts down those who practice the so-called “invisible arts.”

The most fascinating thing about Cultist Simulator is how it slowly builds out its world. As the Aspirant, you’re hunted by an inspector who notices that you’ve been whispering about the occult in smoky parlors. But once you die — and you will die, because death is part of the cycle — you’ll have the option to play as different characters, one of whom is a Detective for the same organization.

Each character you play will call back to previous lives you’ve explored. As the Detective, you’re drawn to the sealed case file of a former occultist. When you become the Bright Young Thing, you’ll hear rumors about your last character. As the Physician, you recall a troubled patient who rambled on about the same dreams you’ve been having.

The dreams keep recurring — the Bright Young Thing notes that their father was plagued by them as well. It’s as though some kind of madness is contagious in Cultist Simulator, tormenting people across cultures and times with visions of something beyond. These repeated references to the Hours, the Mansus, the various terrifying gods keep appearing everywhere you look. Some books refer to others as well, and you occasionally see mention of the authors feuding or in love. In-game lore also alludes to real-world mythology, adding yet another layer of meaning. And as you play different characters, it’s actually exciting to find the same texts once again because it feels like the same glittering, elusive thread runs through all their stories.

The coolest thing is when you finally make it into the Mansus, which appears as a brief dream and overtakes the whole screen. It appears as a map with many spokes and paths to enigmatically named locations — if that’s what they are. It shows you that so much more is left to be discovered — like the Lodge of the Sage Knight and The Red Church and The Chamber of Ways.

READ Does it hold any potential for music-makers?

The atmosphere is dark and full of terrors 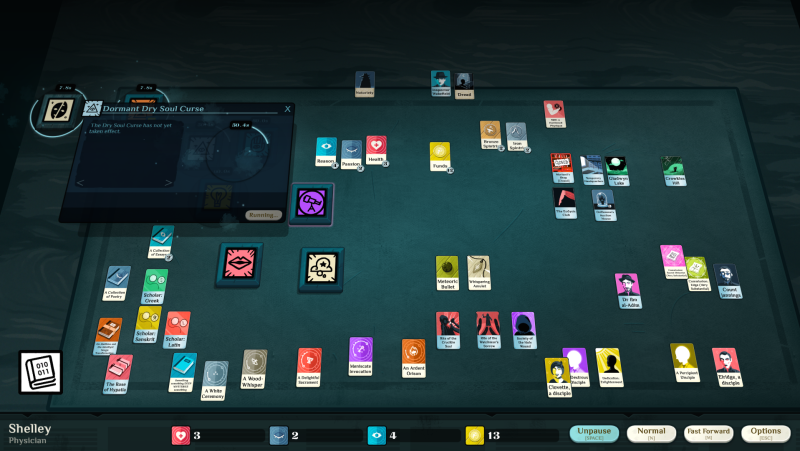 Above: Random events like the Dry Soul Curse will plague your run.

Most of your time will be spent in a shadowy room, poring over a table where all your machinations are laid out before you in the form of playing cards. Some of these represent people, the believers whom you’ve managed to convince to join you in your otherworldly quest. It’s easy to think of them as simply resources, and you perform a cold calculus when you decide whether or not to sacrifice this disciple versus that one. But like in Kennedy’s previous games, everything is described with tantalizing detail, and every so often, you’ll find yourself struck by the feeling that these are lives you’re playing with in a world filled with real dangers.

Cultist Simulator has terrific atmosphere and it deftly strums your emotions as you uncover more of its secrets, alternately thrumming with inspiration as things start making sense and slumping with defeat when you can’t figure out what you need to create a human crucible. Accompanying you on this dark task is an eerie soundscape that occasionally segues into devious minor-key arpeggios that imply that what you’re doing is forbidden and unthinkable. Whispers emerge and fade away when you begin courting pawns to bring into your cult’s fold. Sometimes the soundtrack makes you feel like you’re in a haunted great hall, the music reverberating off the upper clerestory or perhaps reaching you from a far-off underwater cavern.

The sound design is fantastic, punctuating your quest with the ominous ticking of the clock running down. Some cards have timers on them, and when they expire, they burn up into ash before you, glimmering notions escaping your brain before you’ve fully grasped their meaning. 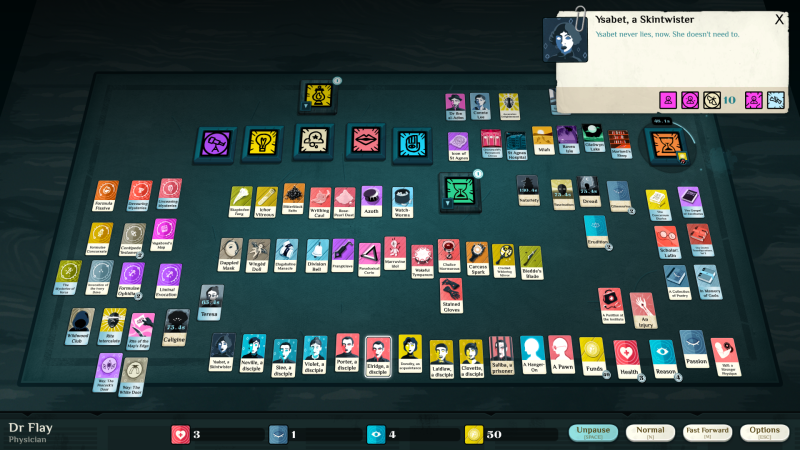 Above: Lots of paperwork involved with running a cult.

As you dive deeper into Cultist Simulator’s lore, you might soon find yourself overwhelmed with cards. Even when I started out with a gameplan — I’ll keep my books over in this corner and my artifacts over in that one — it’s easy to lose track of everything you’ve collected. When an action is finished, it will often yield multiple cards. Sending your disciples out to investigate the swampy Gladwyn Lake, for instance, might have them returning with over 10 cards. And when you click “Collect all,” they will spill out randomly.

This can get a bit frustrating, though you can pause while playing to reorganize. But I still wish that the designers offered a way of keeping things neater, something like cards snapping to a grid or perhaps designating parts of the table where certain card types will land when you collect them.

People who are used to having a zillion screenshots on their desktop will probably be OK with how cluttered the table can get in Cultist Simulator. Others will likely cringe at how the cards don’t line up just so.

The extraordinary as the mundane

I’m torn on this one. I waffle between enjoying how major discoveries feel simply like small pieces of a grander puzzle and wishing that the game gave me a bigger sense of accomplishment. Even after you’ve made it to the Mansus for the first time, you’re plunged right back into your daily grind of brainwashing — or, more tactfully, “persuading” — people to join your cult and buying obscure books. When you discover a rare artifact, you might get a bit of text saying that it might be important in a ritual, but more often than not, it’s treated like any other item. It doesn’t hint at what certain cards may do in combination with others, and it doesn’t celebrate when you discover those combinations either.

This is a double-edged sword. It contributes to the illusion that you’re plunging into twisted intricate lore, and like in real life, it’s tough to distinguish between what will ultimately be useful and what’s just chaff. It also lends itself to the open nature of the game. You can choose what your cult will be about and you can decide on what rituals to perform.

Cult Simulator has many endings, so it’s true that perhaps that artifact isn’t too important to you if you’ve decided to go in a direction that doesn’t need it. And when you do tease out how things work, you do get a sense of satisfaction that your experimentation has paid off. At the same time, it would be nice to get a little more feedback.

Cultist Simulator feels like a spiral into madness, but it doesn’t have to be. Kennedy has said that you can just ignore all the occult happenings and focus on your day job at Glover and Glover. You’ll go on to retire peacefully after a series of modest promotions; let some other poor wretch chase phantoms and dreams.

That’s the real beauty of Weather Factor’s debut title — the world feels so large and full of possibilities, even though everything is mainly told through small snippets of text. It’s filled with poetry, like descriptions of a vial of Greydawn Oil that’s “the precise color of the hours when one cannot sleep,” and it makes you want to explore and unravel its mysteries. And it makes you work for it, reading between the lines and imagining a realm unseen.

Though I have some minor quibbles about the game’s interface, I find myself returning to its world again and again.

Cultist Simulator is out today on PC. Weather Factory sent us a digital code for this review.