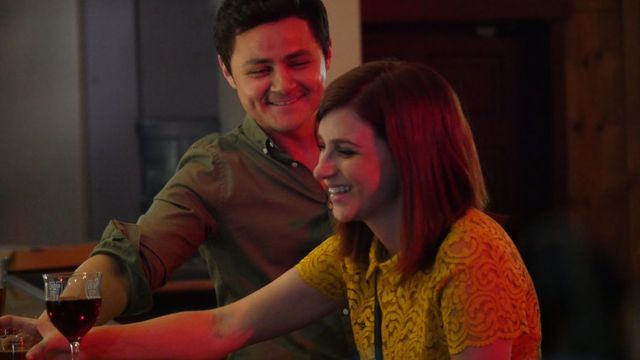 The older I get, the more I’m struck by the realization that being an “adult” doesn’t mean you’re suddenly imbued with maturity and general confidence and know-how, that being of a certain age doesn’t mean that everything falls into place the way like it did for what seemed like every adult you knew growing up. Every vision we have of what it means to come of age, to become an adult, is derived from some kind of exterior model, of an amalgamation of societal expectations for what you should have done by now—whether it’s getting the husband-plus-house in the suburbs-plus-two point five kids, or donning your suit and/or shoulder pads to take on the corporate world by day and unwinding with sophisticated cocktails and/or a hookup with an attractive stranger by night. And the goalposts keep moving as these models become less and less realistic for every subsequent generation of adults. Maybe you don’t live in a house; maybe you’re paying rent in an apartment and living with a roommate long after college. Maybe you don’t have a full-time job, and alternate part-time work with emailed pitch after emailed pitch sent from coffee shops.

While Brand New Old Love is ostensibly a romantic comedy about two friends (Aya Cash, You’re the Worst; and Arturo Castro, Broad City) who fulfill their high-school pledge to marry each other by age thirty (which apparently was a thing in the nineties?), it’s also an honest, unglamorous exploration of what it means to be an adult in the 2010s. Written and directed by Cat Rhinehart (My Super-Overactive Imagination, Recycled Babies), the film is a comedy in the way that shows like Transparent and Barry and Catastrophe are comedies; that is, it’s not really that funny—just made with a light touch. If it weren’t for the trope-y premise, the sunny Southern California palette, a bright and poppy ambient soundtrack, and a kitschy cassette-tape framing conceit, Brand New Old Love would play straight as a drama about the pressures of adulthood, and how stifling expectations can be—whether they come from society, your surroundings, or even from yourself. Essentially, regardless of whether your friend or brother seems to have their adult pants on and have their life in order, they inevitable really, really, don’t—we’re all just trying really hard to look like we know what we’re doing.

Hannah (Cash) is recently divorced with cash to burn and zero fucks left to give; Charlie (Castro) is a sentimental fitness instructor whose acting career is going all of nowhere. After they run into each other one dreary night in a bar in their hometown of Modesto, California, Hannah and Charlie decide that in the absence of having the careers and lives they truly want, they can at least make good on their promise to marry one another. Charlie (whom Hannah affectionately and tellingly calls “Chuckie”) gets out of that ephemeral “friendzone” by bagging his dream girl, while Hannah gets to feel adored and worshipped, hoping Charlie will map his dormant feelings for her high school self onto who she’s become in the meantime.

It’s once they begin to settle into their new life as a couple in LA that the cracks begin to show. Some are caused by external forces, like Charlie’s eccentric roommate Bruce (Josh Brener, Silicon Valley), who keeps bursting into their bedroom to use the en-suite bathroom (the only one in the one-bedroom apartment) with an endless parade of attractive women. But nearly every misunderstanding Hannah and Charlie have in their fledgling marriage can be attributed to their (conscious and unconscious) attempts to create the kind of relationship they think they should be having. It’s as if in the absence of a closer, more immediate example, they’re basing their marriage on various archetypes and beats established in pop culture, hoping that emulating representations of happy marriages will naturally transfer to their own. On their first night in LA, Charlie expresses surprise and disappointment that Hannah has chosen to wear comfortable sweats and a tee-shirt to sleep on their wedding night, as he was undoubtedly weaned on the idea of the newlywed bride in a negligée (as were we all). Soon, the apartment becomes filled with both his-and-hers junk as they cram both of their beds together in his room—a perfect example of their inability to compromise like actual adults.

Brand New Old Love starts to lose narrative momentum after the establishment of the kinks and corners of Hannah and Charlie’s marriage, yet there’s an attention to detail, and a bit of gentle foreshadowing with Hannah’s tomato allergy or Bruce’s grandfather’s own marriage, which ties the whole thing together. Aya Cash tones down the bluntness of her indelible role on You’re the Worst to slip into what I’m calling an Aniston-ian mode. Hannah always makes herself smile and laugh; even though she’s uncomfortable, she’s radiant in that leading lady way, the way of a girl who’s always been told she was pretty and reflects that glow, soaking up praise like she’s under a sun lamp.

But Modesto Pretty is evidently different from Los Angeles Pretty, as Hannah soon learns. Charlie buys her yoga pants to replace her sweatpants, setting off alarm bells; Hannah learns from a group of Los Angeles attractive Goop-y brunch-ing women (I really don’t know how else to describe this type) that she’s starting to get “elevens” in her brow line, and subsequently freezes her face with Botox. Arturo Castro’s Charlie gets slightly more development and filling out—we spend much more time in his circle than in hers—and his transformation from giddiness to disillusionment is compelling to watch. The character of Bruce, when he’s first introduced, risks coming across as overly broad, like something from an SNL sketch or an Adam Sandler movie. Yet Brener plays Bruce’s oddities and quirks as layers on top of actual melancholy: despite his disavowal of marriage as a concept, he’s envious of his grandfather, who was in love with his wife until the day she died, and he’s worried that Charlie will stop being his best friend now that he’s a married man.

But what Brand New Old Love does best is show that even with evidence to the contrary, none of the more “adult” seeming characters know what they’re doing: even Charlie’s brother (David DeSantos, The Rookie), a proud married father of a newborn, crashes on the apartment’s couch and finds himself smoking weed with the baby in the room. There are moments where you can fake it till you make it, and moments where people will project their own pictures of what it means to be an adult onto you, meaning that you pass a kind of test you didn’t know you were taking. In one scene in the film, Hannah and Charlie, deciding to relive their glory days of high school by going to a punk concert, find themselves wildly out of place amongst the punks by the stage door, who ask them about their kids. And in the end, it’s committing a juvenile act of trespassing that provides that missing spark in Hannah and Charlie’s marriage, proving… something? Proving, I guess, that adulthood isn’t one-size-fits-all? Maybe the secret of being an adult might just be that you’re an adult when you can look in the mirror and tell yourself you are one, without caveats, without that self-conscious, sarcastic groan of help-I-hate-adulting, regardless of what kinds of milestones you’ve hit (or not) along the way.

Deborah Krieger is a freelance arts and culture writer and nascent art/media historian and curator. She can be found at www.i-on-the-arts.com and on Instagram @debonthearts.