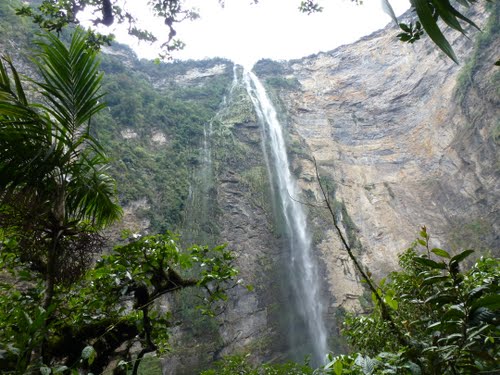 Find Out Alternative “Valley of Waterfalls” To Travel This Summer

There are several regions throughout the world that would certainly qualify as valley of waterfalls.

Yosemite Valley in California, Lauterbrunnen Valley in Switzerland and the area around Milford Sound in New Zealand are well known examples. For obvious reasons however, these places also tend to be a bit crowded – especially during the high season.

For those who’d like to avoid the crowds and still enjoy breathtaking waterfalls, there is an alternative. In Peru’s Bongará Province, an area just about the size of Rhode Island, you can find some of world’s highest and most stunning waterfalls within a few kilometers of each other. Here you’ll not only find very high waterfalls like Gocta Falls or Yumbilla Falls but also hidden gems of smaller waterfalls like Chinata Falls, Aspachaca Falls or Lindapa Falls.

In addition the waterfalls and many hiking trails, this region offers a great scenario for birdwatchers. The Andean Cock-of-the-rocks and the Spatuletail Hummingbird are just two of the many exotic birds that can be found in the cloud forests surrounding these waterfalls.

The visit to each waterfall requires a hike through the mountainous jungle of North Peru – some relatively short and easy, others quite long and strenuous. The hike to Gocta Falls can be done (partly) on horse but generally, this area is suitable for people who like to hike, enjoy nature and possess a good level of fitness.

Out of all waterfalls in Bongará Province, this is the most famous one. This two-tiered waterfall is 771m high and can be observed from several vantage points in the region.

It was from one of those vantage points that German national Stefan Zimmendorf first noticed it in 2006. He didn’t actually discover it – it had always been known to locals – but rather made it known to a wider, even worldwide audience. He was one of the driving forces behind the measuring of Gocta Falls that eventually led to its registration as one of world’s highest waterfalls and to the touristic development of the valley and waterfall.

Today, you can visit this breathtaking waterfall through a 5km hike from either Cocachimba or San Pablo de Valera. Both starting points will get you to the waterfall but each route will lead you to a different finishing point. If you start in Cocachimba, your path will follow a trail on the right side of the valley and bring you to the bottom of the second and taller drop of the waterfall (540m). If you start in San Pablo, you’ll follow a trail high up on the left side of the valley and finish your hike at the bottom of the first and smaller drop (231m). Needless to say, the views of the valley and Gocta Falls are spectacular from both hiking trails.

The 10km return trip may seem like an easy hike but the many turns of the paths and constant ups and downs make it quite strenuous. You are well advised to wear sturdy shoes and bring enough water and snacks to last you through this 5hr hike. For those not so good on their feet, there are horses with guides for hire at both locations that will bring you at least part of the way. If you choose so, you can also hire a local guide for orientation and more information. The entrance fee for either trail is 10 Soles per person.

Although not as famous and as visited as its sister waterfall, this four-tiered waterfall is even higher than Gocta Falls and stands at a total of impressive 896m.

The starting point for a visit to Yumbilla Falls is the small village of Cuispes. After paying your entrance fee (10 Soles) at the local tourism association, you’re free to undertake this venture on your own or hire a local guide.

The trailhead is about a 10 minute moto taxi ride from the center of Cuispes. From there it meanders for 3km through lush cloud forest and along the side of the mountain. Several lookouts along the way offer a view of the valley and the waterfall. Plus, there are more waterfalls along the way that can be reached by short side trips. One of them, Pabellón Falls, stands at almost 400m. This might seem small compared to its tall neighbor but in many places this would be a very high waterfall.

The trail ends at the bottom of the last – and especially impressive – drop of Yumbilla Falls. It is a great spot to rest and enjoy the scenery before heading back up to Cuispes. All in all it should take you about 3 hours to complete this hike.

Although this waterfall can be seen from different lookouts in the area, few people have actually visited it. It is a multi-tiered waterfall and reaches a total height of 580m.

You can choose to hike to this marvel from either the village of Cuispes (6km one way) or San Carlos (12km). Unlike Gocta Falls and Yumbilla Falls, this is a sparsely visited waterfall and the trails aren’t used much – if they exist at all. The best way to reach Chinata Falls is to hire a local guide who knows the way and who’ll be able to clear a path through the thick vegetation of the cloud forests.

This is definitely an off-the-beaten path experience and only suitable for people with a sense of adventure. Not everyone can handle walking through dense vegetation on non-existent muddy paths.

With a total drop of 50m, this waterfall is definitely one of the smaller ones in the area. It can easily be reached through a short but steep uphill hike.

Located near the village of Churuja, pretty much in the middle between Gocta Falls and Yumbilla Falls, you’ll find this hidden gem of a waterfall. The upper part of the waterfall can be seen from the village but you can only appreciate it in its totality once you reach its bottom. The water falls in the middle of a beautiful natural rock amphitheater and forms a large pool that is perfect for swimming on a hot day.

The trail up to the waterfall is steep but not very long. It’s a 4km return trip that will take you no more than an hour to complete – swimming and resting time at the waterfall not included.

The highest of this triplet of smaller waterfalls – 20m or 30m each – once was a resting point on the trail between San Pablo and San Carlos but has since been forgotten by all but the local population.

As this hiking trail is unmarked and there are many turn-offs that lead into the fields, it is highly recommended hiring a local guide for this trip. From the village of Churuja, the trail leads through fields of coffee and dragon fruit until you reach the grassy heights that provide an excellent view of the Utcubamba Valley. From there it’s only a short distance to the first and highest of the three waterfalls.

Just before reaching it, you can see an old stone bridge crossing the stream. This was part of the old network of trails that people used before the main road in the valley was built. There are also leftovers of an old Tambo – a resting point for people passing through.

After visiting the highest waterfall, you have to retrace you steps and walk down to visit the other two waterfalls. Here also, you’ll observe abandoned structures like benches and handrails at the lookouts. Any waterfall provides a good location for a picnic or even a swim in hot weather. All in all, it’ll take you about two hours to hike the 3km of trails.

There are just five of the many waterfalls in this province. There seem to be hundreds of them scattered throughout the valleys of the region. Some of them can be seen from the villages, some are hidden in remote locations and known only to insiders, some are famous and yet others are dwarfed by their tall sisters and remain forever unnamed.

The Valley of Waterfalls is located in the province of Bongará in Peru’s Amazonas region. It is best reached by flying from Lima to Chachapoyas or Jaén and then taking a bus, minivan or taxi to reach the region. Either way, it’ll take you half a day to reach your destiny.

As for accommodation, you can choose to stay in one of the villages closest to the waterfalls or base yourself in the city of Chachapoyas and do day trips. Both options work great since distances are short and travel times to the trail heads never more than 1 ½ hours.  You can find any of accommodation to suit your needs and budget – from luxury bungalows to simple rooms offered by the locals.

Remember, this is a cloud forest region where it can rain even in the so-called dry season. The wet season with heavy rains is December through March.